Ive been reading that Ja Rule was advertising this concert on some small private island for an all inclusive price of $7500 and up. First the private charter plane is a shitty small plane instead of a nice private jet. The kids get there and they are fed bread and cheese instead or the promised gourmet meals. They are housed in shitty pop tents, and then locals start robbing them.

Talk about a captive audience.

Reports from the Bahamas indicate that the Fyre Festival — a heavily hyped two-weekend “luxury” concert on the island of Exumas — is a disorganized mess, with incoming flights grounded and the festival site in chaos. Scheduled headliners Blink-182 cancelled their appearance late Thursday; the status of other headliners, including Pusha-T, Migos, Disclosure, Major Lazer, was unclear at press time.

Festival organizers postponed the event on Friday morning amid the chaos, tweeting “After assessing the situation this morning and looking at best options for our guests, we cannot move forward as we hoped we could.” They added that they are working on scheduling flights for those already on the island.


Social media lit up late Thursday with reports from concertgoers who described an unassembled festival site, lost luggage, and inadequate transportation. Flights to the island from Miami were canceled because the island was “over capacity,” according to reports.

The concert, organized by rapper Ja Rule and entrepreneur Billy McFarland, had promised “a cultural moment created from a blend of music, art, and food.” Tickets ranged between $1,000-$12,000 — and some VIP packages as high as $250,000 — with amenities including private plane and boat rentals, massages, and local beach tours.

According to reports from would-be concertgoers, the site is more like a hurricane disaster staging area, with incomplete tents and boxed lunches instead of luxury accommodations and celebrity chef-prepared meals. One attendee told Billboard, “They’re basically disaster relief tents. With a mattress on some sort of bed frame. They’re not that uncomfortable, but the tents are so poorly made that they’d blow over in a second if there was any wind or rain.”

In a statement, Blink-182 said, “We’re not confident we would have what we need to give you the quality of performances we always give our fans.”

A series of tweets on the festival’s site, sent early Friday, reads: “We’re currently working through the unexpected start to #FyreFestival. Thank u for bearing with us as we attempt to accommodate guest needs. GUEST ON SITE: Working to comfortably accommodate needs. If you need, please head to main site/blue house. Security, first aid, + staff 24/7. GUEST W/ PENDING TRAVEL: Due to circumstances beyond our control, inbound flights have been canceled. We’re working to refund your ticket.”

The concert had been promoted with a splashy video featuring Bella Hadid and Emily Ratajkowski that depicting people sunning on the beach of an island “once owned by Pablo Escobar,” riding jet skis, and luxuriating on yachts. But in the weeks leading up to the festival, the Wall Street Journal reported that several of the headliners had not been paid their advances, although later this was rectified. On April 17 the New York Post published a story headlined “Are Fyre Festival organizers in over their heads?” which cited a source as saying “attendees have not yet seen pictures of their ‘villas’ on the fest’s private Bahamian island,” while another source said, “It feels like they have good intentions, but are out of their league … Several companies bailed on working with them because they were very disorganized. They don’t return calls.”

On Friday morning the festival’s website still hosted original advertising for the festival: “You’ll be flown roundtrip on a custom, VIP configured Boeing 737 aircraft between Miami International Airport and Exuma International Airport on Great Exuma. Guests will be staying in modern, eco-friendly, geodesic domes. Additional housing and events are available for purchase across nearby islands and private cays.”

I hope none of these kids paid for this luxury trip with their college loans!

I know when I see names like "Pusha-T, Migos" my first thought is luxury

Surprised Ja Rule even has fans

if its a private island who are the locals? They guys that own the island or are there people that live there that aren't owners of the island? 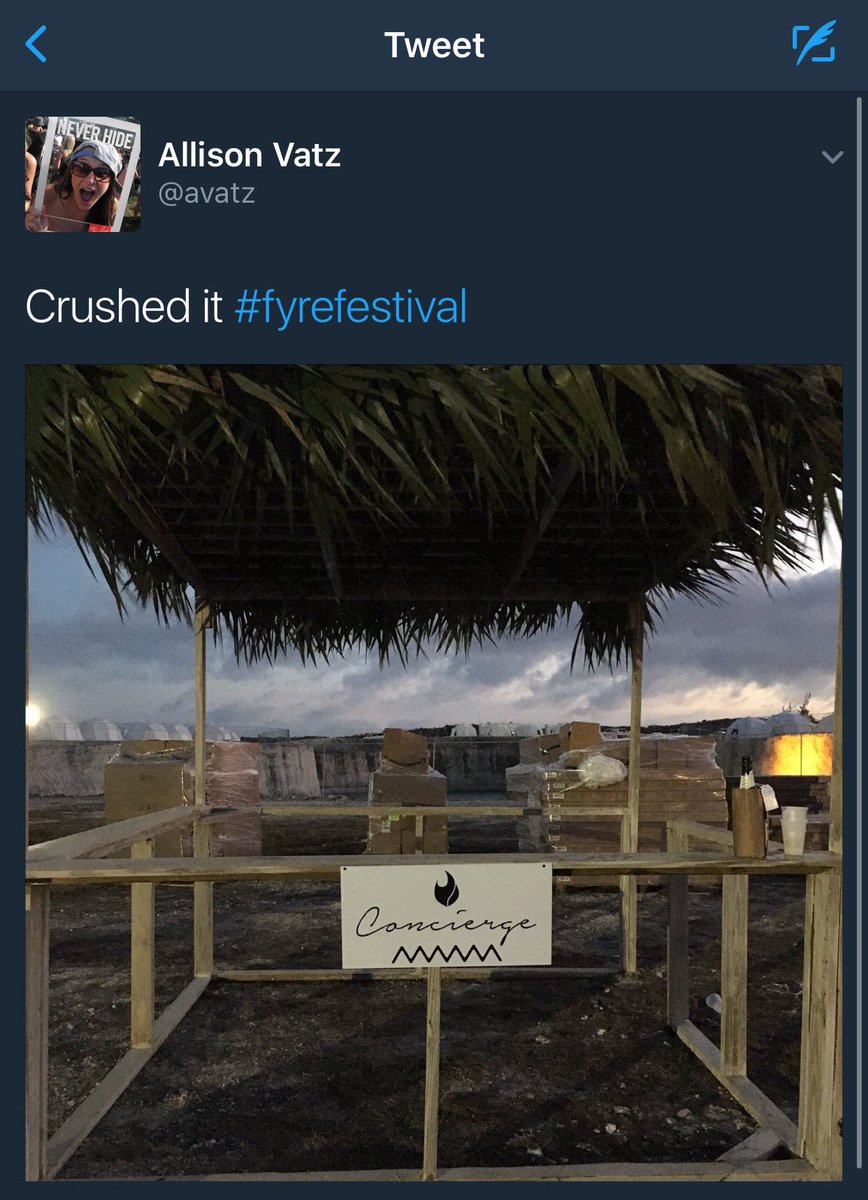 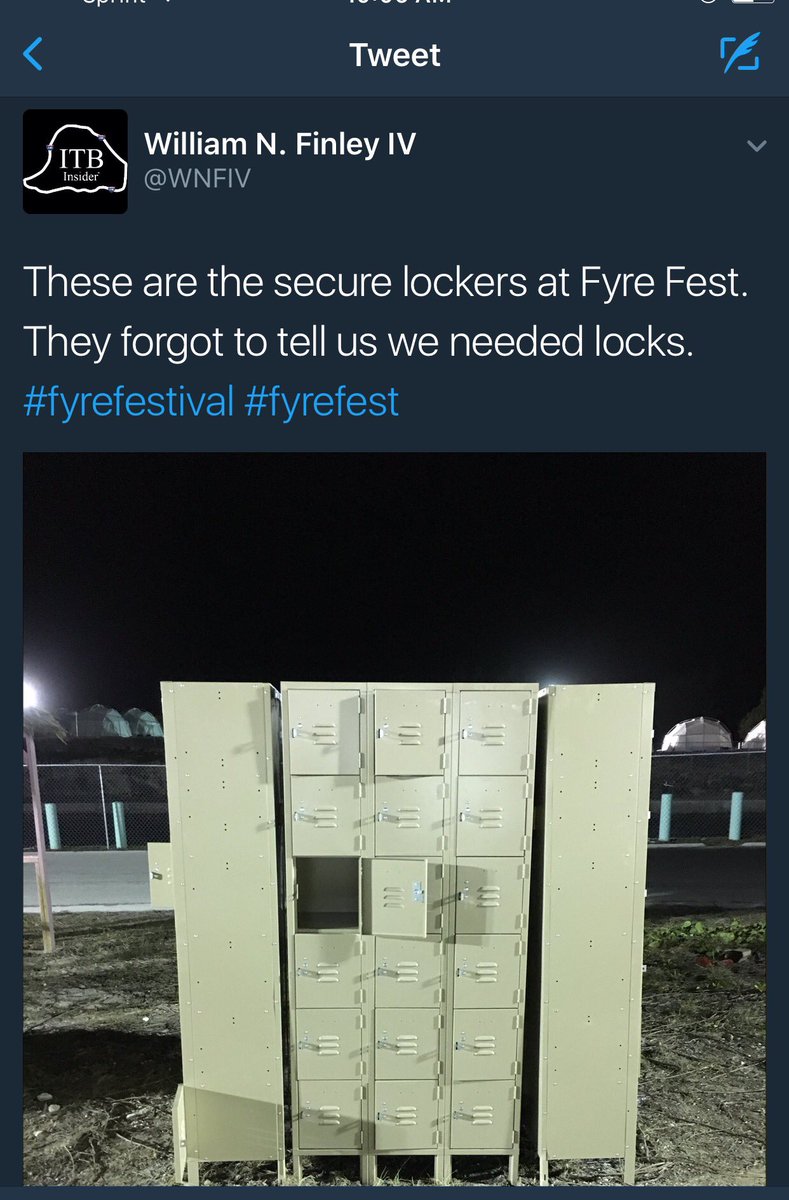 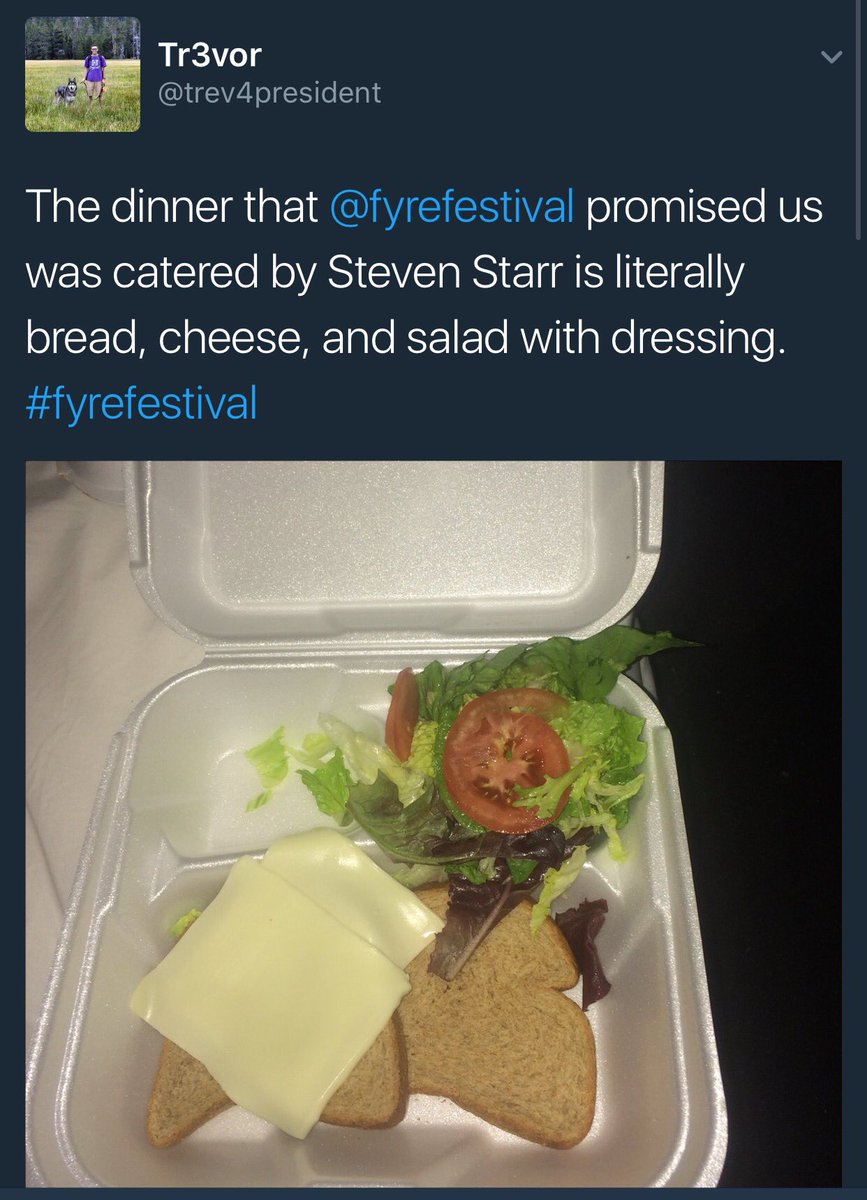 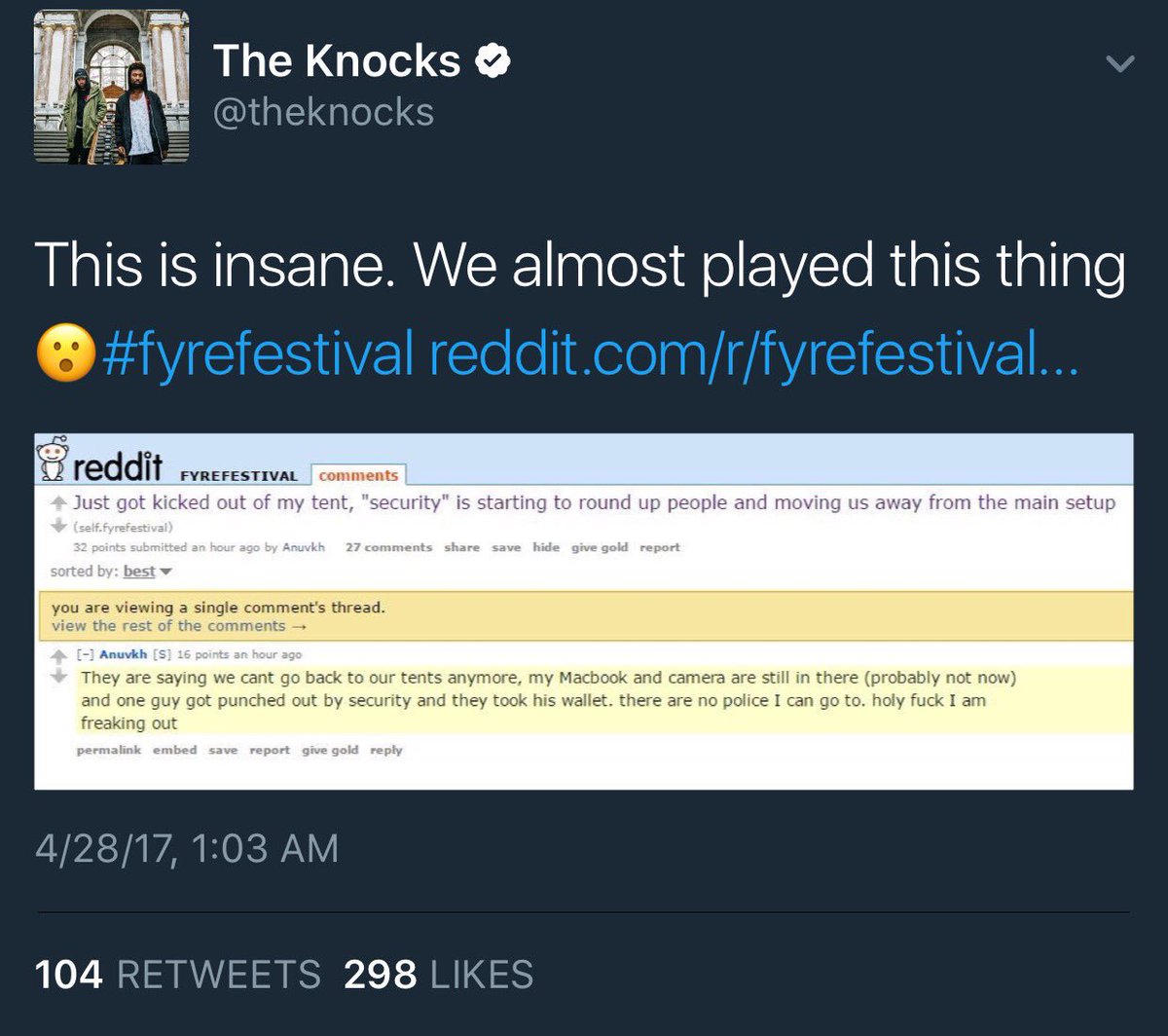 Ini Kamoze needs to get in on this shit, pronto. 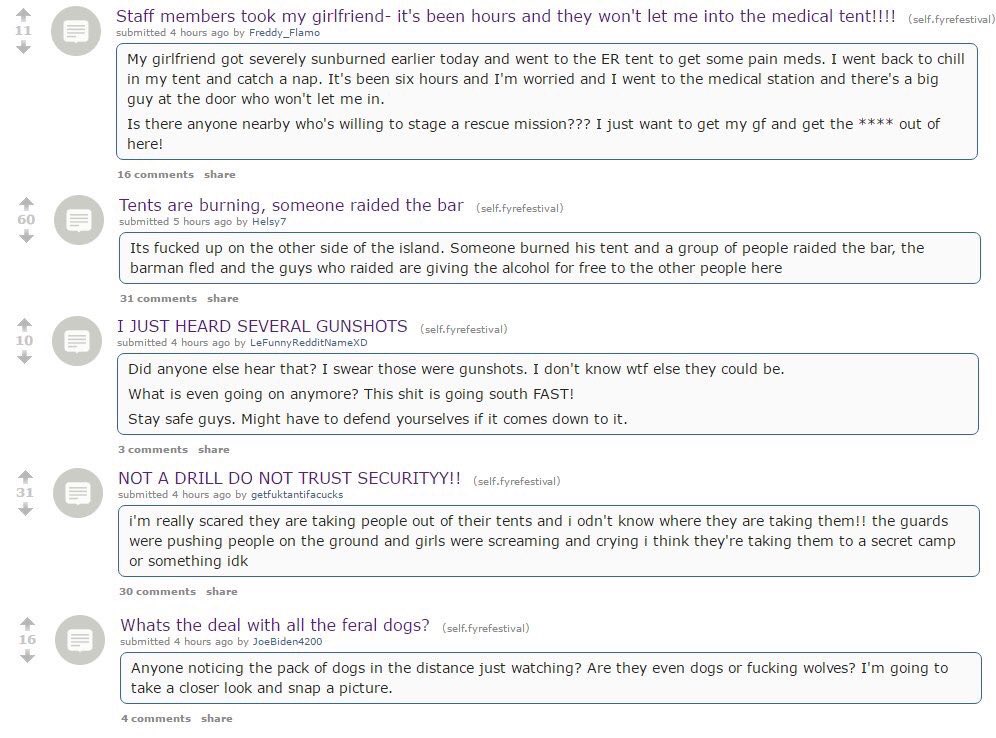 This is how Fyre Fest handles luggage. Just drop it out of a shipping container. At night. With no lights. #fyrefestival 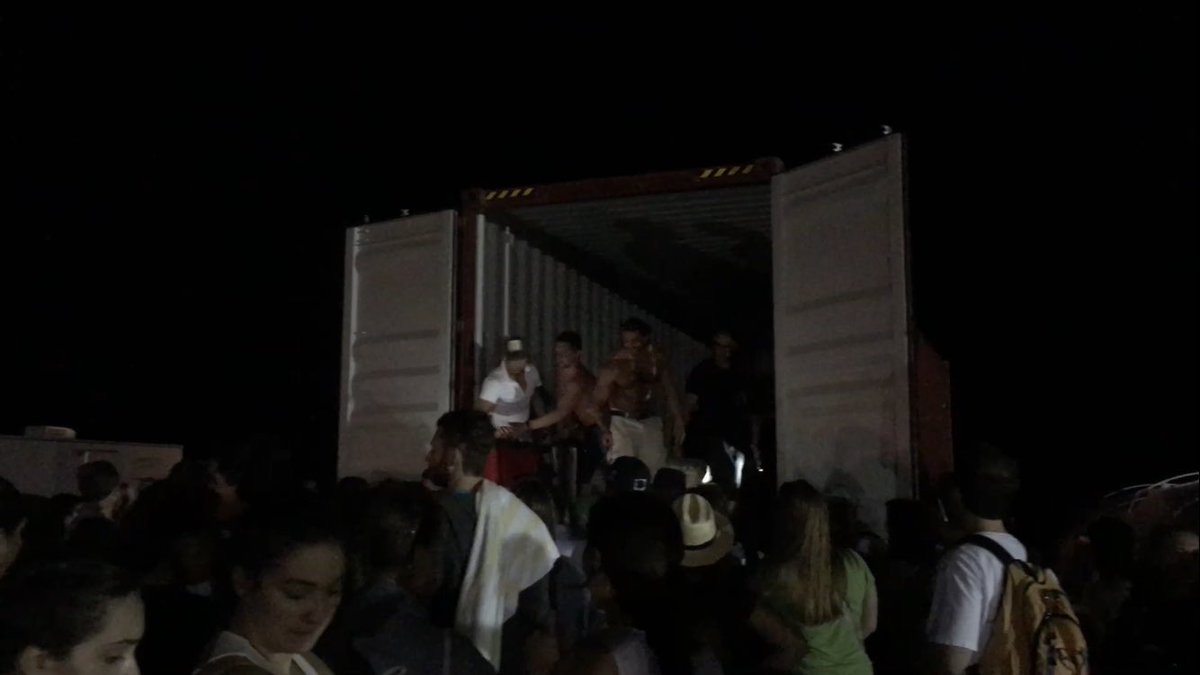 Aint nothin but a scam bebe!