Jan-Michael Vincent. Then and now. Alcoholism is a bitch.

In the 1978 classic Big Wednesday. Father time and alcoholism wait for no one... 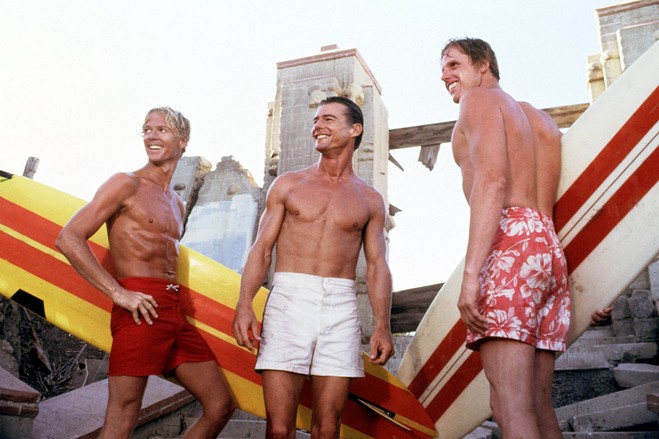 damn... busey looks better than him

He might be missing one leg, but Jan-Michael Vincent’s attitude never faltered since a bad infection changed his life drastically.

In an exclusive interview with The National ENQUIRER provided to RadarOnline.com, Vincent talks about life after being a Hollywood star and losing his leg. The former Airwolf star, whose life has been ravaged by alcohol, drugs and violence, told the magazine that he knocked on “death’s door” after a leg infection – a result from complications of peripheral artery disease – forced doctors to remove the majority of his right leg.

“I felt like I was beaten with a whip,” he revealed to The ENQUIRER. But it wasn’t over after the initial amputation. Vincent’s wife, Anna, said that while he was recovering from the drastic surgery, she was forced to “be brave for him” despite wanting to faint. She also admitted that doctors told her he might not survive because of the severity of his health.

“I remember one horrible night in the hospital,” she recalled. “I had to help hold him down and keep the oxygen mask on him so he could breathe.”

But after a month in the recovery ward, the ‘80s heartthrob developed another infection, resulting in a second amputation. His wife, however, stayed by his side and has even helped him learn to walk with a prosthetic limb, which helps keep his spirits high.

“I look at this now and think I have nothing to be upset about when I think about what our U.S. military go through,” he told the magazine. “They’re the real heroes.”

Although he has maintained a positive outlook, Vincent’s financial problems also weigh on the couple. His wife revealed to The ENQUIRER that they owe about $70,000 in back taxes.

In the 1978 classic Big Wednesday. Father time and alcoholism wait for no one...

One of my fave movies of all time. That scene right there when Jan passes on his gun to the stoked grommet, legendary.

Can he still fly a heli with one leg?

Hard to believe he is only 49 years old.

You don't know much about Jan Michael Vincent I take it.

He's a piece of shit. A raging alcholic and a woman beater.

Guy beat one of his girlfriends and caused her to miscarry.

He'd look better if he cut his hair and put on clothes that fit.

You don't know much about Jan Michael Vincent I take it.

He's a piece of shit. A raging alcholic and a woman beater.

Guy beat one of his girlfriends and caused her to miscarry.

Really?! I didn't know about that. Terrible and disappointing.

I was a huge Airwolf fan as a kid, I actually rewatched some episodes on Hulu a while back.

StrikingMMA - My first memory of his career was the movie Tribes. He played a young hippie in Marine Corp boot camp.

I remember that movie!! They played it late one Saturday night when I was a kid, back when we had 3 stations that went off the air at 0200!

Most memorable scene is where the DI is trying to punish him by making him hold buckets of sand outstretched, and he's just standing there doing it with a stoic little smile on his face...

Whoa...brutal. He was at his studliest by far in the movie Deliverance. Definitely worth a watch if you haven't seen it...circa 1980 or thereabouts...

He was huge for a while when I was a kid and young teen. I think that he has been driving on some pretty rough roads for more than 20 years now.