I don’t care about them being wrong

we are talking about you being wrong

in every trial, there is at least one legal expert who is wrong.

I guess the legal experts are wrong. I’ll let them know cuckleberry said so

Well he also insisted anything a witness says that somebody else told them is hearsay and not evidence. Somebody should have told John Durham that since his main evidence against Sussman was Jim Baker’s testimony about what Sussman had said to him in a meeting.

go look it up.

the report of another person’s words by a witness, which is usually disallowed as evidence in a court of law.

that is the definition of hearsay.

for those who can’t be bothered to educate themselves.

I wouldn’t end up in court

I’d school them into dropping the case before it got there.

here is another more in depth definition of hearsay

Testimony from an under-oath witness who is reciting an out-of-court statement, the content of which is being offered to prove the truth of the matter asserted. In most courts, hearsay evidence is inadmissible(the “hearsay evidence rule”) unless an exception to the hearsay rule applies.

which is usually disallowed as evidence in a court of law.

Except in most Rico cases

Doesn’t really prove what I claimed about Rico so I’ll retract that. But hearsay isn’t always inadmissable

i know, ive posted the exceptions in this thread 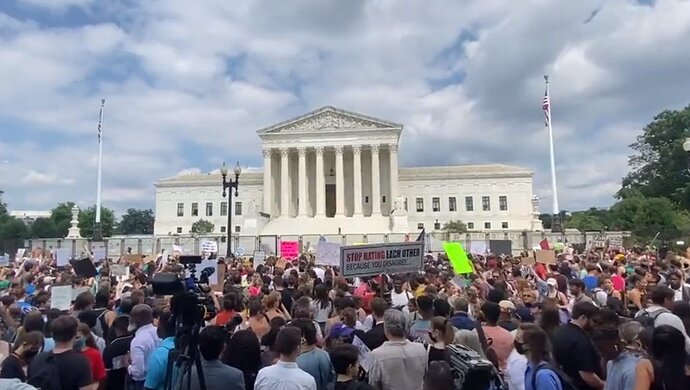 And to call for insurrection

Antifa is chanting to burn down the Supreme Court right now but muh insurrection.

Are they being coordinated by politicians?

AOC is on video telling people to take to the streets. Maxine Waters is on video calling the USSC illegitimate and that they won’t abide by their laws.

All in the same day as these people are chanting violence against federal buildings.

OC is on video telling people to take to the streets

And? You have the right to free assembly. Peaceful protest is a cornerstone of American democracy. I don’t agree with waters, she’s nuts