She is best known as the 1940s elevator attendant for the Empire State Building who survived two large accidents on the same day. 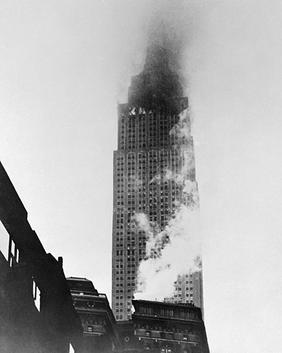 First she survived an airplane crashing into the Empire State Building:

Oliver was working on the 80th story of the building on July 28, 1945. On that day, due to thick fog a B-25 Mitchell bomber crashed into the north side of the Empire State Building. The plane struck the 79th floor of the building. Oliver was thrown from her post and badly burned in the accident, though she survived, while 14 others did not.

Then she survived a SEVENTY FIVE story drop in an elevator:

When rescuers got to her they decided to lower her via the elevator, unaware that the cables had been weakened to breaking point. Once the elevator doors closed, the cables snapped and Oliver plummeted 75 stories to the basement.She screamed all the way down when falling in the elevator. Oliver survived but again had to be rescued and was later treated at the hospital for serious injuries. The thousand feet of elevator cable had fallen to the bottom of the shaft, creating a softer landing surface. The rapid compression of the air also likely helped slow the elevator's fall.

This descent still stands as the Guinness World Record for the longest survived elevator fall ever recorded. Five months later, Oliver returned with an elevator inspector, who complimented her "guts" in riding the elevators to the full height of the building on that visit.[1]

Who wants to attempt to break that record?

Interesting regarding the air compression and the cable as padding.

The gov't knew the plane was going to fly into the buidling.  Weeks prior there were construction crews setting explosions inside the elevator shaft.  The gov't wanted an excuse to continue the war!

That lady is an Alpha.

Quite the looker in her day,