Like most democrats she’s never been challenged by the mainstream media and it shows. She probably was expecting something more like this. 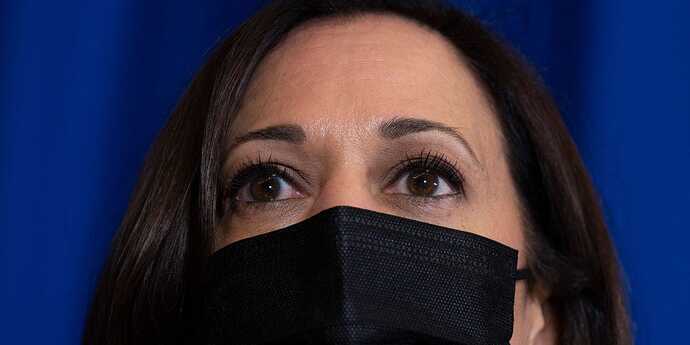 A woman introduced as a Univision reporter lavished praise on Kamala Harris at...

Fox News reported that the woman had been misidentified as a Univision reporter when she was in fact an entrepreneur.

If, for whatever reason, Biden does not run for re-election in 2024, Harris will not be a shoe-in to be the democratic nominee. She will face a primary challenger from within her own party.

Most likely Biden won’t make it 3 more years, but Disney is working on an animatronic Joe Biden that will sit in his basement, speak incoherently and tell Corn Pop stories.

If, for whatever reason, Biden does not run for re-election in 2024, Harris will not be a shoe-in to be the democratic nominee.

I’m not sure it works that way. I believe if Biden steps down before 2024 she automatically is the POTUS and she gets to chose the VP.

Kamala seems much more socially awkward than I expected her to be. She doesn’t appear to be very steady or strong either. Lol yeah if American media treated her and Biden like they did strung, she would freak the fuck out

Democratic primary voters didn’t even like her, she came in like fifth place in the dem primary but she has black women privelege so she got to be VP

She laughs when she’s angry… this bitch is straight up crazy!

She didn’t win a single delegate, unlike Tulsi…

It’s a nervous laugh. A cackle. It just makes her look and sound even more awkward than usual.

I don’t think the dems could have made a worse pick for VP.

She raised her finger and said I’m not finished. That cunt did the same thing to Pence during the VP debates. I’m talking seems to be her go to when she’s in over her head!

Kamala seems much more socially awkward than I expected her to be. She doesn’t appear to be very steady or strong either. Lol yeah if American media treated her and Biden like they did strung, she would freak the fuck out

She’s basically a Hillary clone, but with new and improved ethnicity to check all the desirable identity boxes.

She’s got the same total inability to connect with audiences or with people on an individual level. Every time she opens her mouth it sounds like is reciting a scripted, high polished, focus group tested bit of politician speak that is a total nonsense. It’s meant to obfuscate rather than elucidate. On the rare occasions where she is forced to off script and speak extemporaneously, she often gets herself into trouble and the cackle is her escape valve, where she plays off the retarded thing she just said as a joke.

It’s the low-level wooo she clap back culture. The problem is, while it goes over mostly favorably on twitter and in the media when used against whitey, it doesn’t work as well when it’s Lester Holt or this lady. “I haven’t been to Europe either!”

Correct. If Biden resigns prior to the end of his 4 year term vp Harris becomes president and does indeed get to choose her vp.

If that happens or if biden finishes his term but chooses not to seek a second term my prediction is that harris will not be the Democrat’s nominee. She is too unlikable and easily beaten by any number of challengers from within her own party.

If biden does run for a second term I wouldn’t be the least bit surprised if biden (or whoever is pulling his strings) dumps her as his running mate.

I can’t imagine who they would chose. Biden was the least hated of the bunch. I don’t know of anyone on the horizon that would be a rising star. I think we can count out Cuomo or Newsome lol.

I don’t feel like I’m making a bold prediction; as was stated in earlier posts even the dems don’t like harris. I believe she dropped out of the 2020 presidential race prior to the first primary.

I’m surprised WH is already backbiting on her. What’s the reason?

I agree she is terrible. I just can’t think of anyone on the Democratic side that would be more appealing.

team biden put her in charge of the border and team Harris is like no way…you think she wants to have to be accountable for that mess in '24???