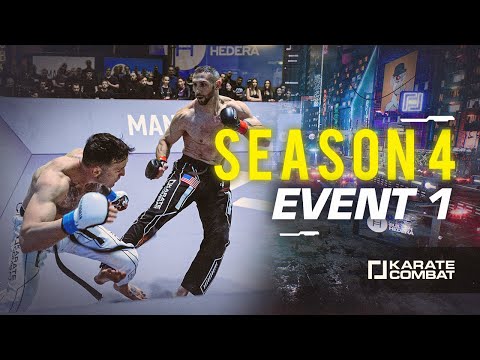 First fight just ended in the 2nd round with a back kick to the face followed by a right hand.

Grazing back kick but still off to a great start.

What are your thoughts on Karate Combat? Have you been watching this promotion at all or??

They should have put it on a Sunday. Missed opportunity to go live during UFC hours

A right uppercut send Igor smashing into the wall where a wheel kick is thrown down upon his face!! by the American Ross Levine, the kick grazed his face luckily for Igor but regardless that was enough for the ref to call it.

Challenging next for the MW title now Ross Levine.

This has taken the days of the PKA / WKA / ISKA the Full Contact Karate years, and has brought it back with a new modern ruleset.

Thanks for posting will definitely check it out!

Yea they had a bit of a break but this new season kicking off is great weekly events for a bit now every Saturday or sunday should be like last season.

The season before that it was every wednesday night fights which I liked better but likely on the weekends this season.