Kayla is too big like Cyborg to go over big

The thing Ronda had is she didn’t look significantly more physically imposing than her opponents. Weigh-in Ronda looked like a regular in-shape chick doing what the public thought was badass shit.

Seeing hulking chicks with man shoulders beating on chunky soccer moms will never have that same appeal. That was a one and done. It doesn’t matter how “dominant” Kayla remains, they won’t be able to find compelling opponents her size. It’s just going to continue to be bums of the month. No chance to go over big.

If Cyborg, Nunes and Harrison were able to fight each other right now (yes I know Cyborg and Nunes fought once and yes I know Kayla is up at 155 lbs right now) then at least they could create a little interest in WFW but having the only three WFW fighters that matter in three different promotions and two of them going down and up to 35 and 55 just makes the division even more of a joke.

WFW is a bit of a joke in terms of having a talent pool but PFL creating a WLW division for Harrison was just retarded. Its Harrison vs girls who have fought at 135 and even 125 in the past but Harrison gets to compete in a special division made for her because she is philosophically against weight cutting.

Harrison might be recieving the most special treatment for a young fighter in MMA history, she had a weight class created for her so she did not have to cut to FW plus they bring in a bunch of cans and FLWs/BWs for her to fight and she gets a million bucks every year in a fake division.

Kayla would likely be KO’d by Nunes in the first round so it’ll never get to the point of her getting over big. All she has is the same thing Ronda had - good ground skills against opponents who have no skills. Except Ronda did it in a more talented division. 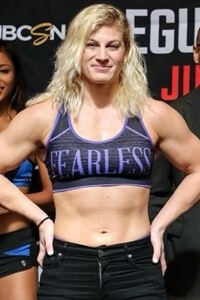 Strikeforce/early UFC/weigh in/media day dressed up Ronda had a little sex appeal going for her though, thats a big part of why she got over with the public like she did.

Thats just not gonna happen in this situation.

Kayla can get big in MMA like Cyborg and Nunes did but she won’t get over big with the public the way Ronda and Gina did.

Kayla really showed her skill by beating that girl last night who showed her asshole on the internet. Top competition. Iron sharpens iron

Kayla really showed her skill by beating that girl last night who showed her asshole on the internet. Top competition. Iron sharpens iron

not sure. I just know that there is nothing better for a fighter in camp than taking a little time out to show the world where you shit from. Kayla is slicing through some tough competition.

Ronda got big from talking a lot of shit. Kayla is not that type so she will unfortunately just be appreciated by hardcores who appreciates her skills.

Cindy has 5 kids but i dont think shes been pregnant for a long time.

I think he meant Dandois, who has six kids and an eight month old according to preflight promo.

No, ronda got big because she was submitting women in the first round in strike force and didn’t look like a dyke.

Meisha who was champ at the time, said ronda didn’t deserve a title shot which was crazy. No other women was dominating in that division. Thus starting the drama between the 2.

I saw ronda at ufc event before she fought in the UFC. She was very good looking in person, which on camera she looked good but like cars that look better in person she was definitely like that.

Cindy has 5 kids but i dont think shes been pregnant for a long time.

She was also working her ass off and staying in shape.

Most women will be at least attractive with 10% body fat and an athletic figure.