Not bad for a guy who hasn't fought for almost 2 years ;)

So much for a guy who is meant to be a slow starter.

He has 2 years off, gets in the ring without a warm up fight, only fights the best fighters in the world in his division, now thats a true champ...

I love watching him fight, and after 2 years, 3 rounds just isn't enough.

I actually thought he might be in trouble after such a long layoff, but nope.

There's nothing more impressive then watching him line up that right hand. It looks laser guided !!

And in case anyone is wondering, Kostya Tszyu is a good traditional Aussie name !!

PS: Keats, it's ok when I do it !
PPS: Keats, get over the the UG, there's boxing threads everywhere, you'll be in your element ;-)

Thanks Tank, i'm on my way.

Tanks right Kostya's right hand and his concentration is unbelievable.

If Kostya lived in the Stats and Talked smack he would be a supperstar, but instead he lives in Australia, respects others, and is a quiet familyman who just goes about his business.

Must be good for guys like Robinson and Nest ect who have been mentioned on here about not being that marketable to see a guy like Kostya and what he has achived.

Another think Kostya did after Zab mouthed off and insulted him was refussed to fight him...Kostya has had the last laugh, reminds me of another situation in Australian MMA scene :)

Hows that Tank i turned a fuckin boxing thread into a MMA thread, this MMA stuff must be rubbing off on me ;)

I've said it before, and I'll say it again, you're a clown Keats !!

If anyone hasn't read Kostya's autobiography, do yourselves a favour and read it.

You quickly come to understand what drives him.
That said, his ability to stay "driven" since hitting "easy street" is inspiring. I thought he might be soft after all the time off and years of the good life, but he showed today he's just as hungry as he ever was.

And his post fight interviews are so funny. He's just chatting, explaining things, like you'd expect him to if you just bumped into him at a coffee shop, not having just won/solidified his title again.

Oh, and I always laugh because he tries so hard to not say "it's because I'm so much better then him" but you know he's thinking it...

Guys in Sydney if you ever get a chance to see Kostya training in the gym go and see him, you will never see someone punching the pads with Lewis like Kostya does. Just watching him work the pads makes the hair stand up on your neck. Awsome...

Cool, I'll check it him out, if I have some spare time.

Just saw the replay on sports tonight and the head clash in the 1st round made a very deep cut above Kostya's right eye. Could have been interesting if Kostya got hit a couple of time on it, not that that looked like it was ever going to happen :)

That would be cool.  I'd love to watch Kostya do some training.  Can anyone come along?  Does he train at any particular time?

I'll ask a friend who is close to Kostya parents, promises. He trains at the Rockdale PYC, the champs gym.

Not sure about now but when he trained in NewTown it was just an open gym. Pretty sure you will find when he is not a few weeks out from a fight you would be right to go for a look.

He trains with the same intensity as he has when he is fighting in the ring, its an awsome sight.

Give then a call Elvis and let them know who you are, i'm sure he would love to hear about the no rules thing. Imagine Kostya in a pair of MMA gloves...now that would be very scary

I was reading a few pre fight reviews on various internet sites regarding this fight. Mitchell was favoured by a lot of reviewers. And I can understand why, Kostya had 22 months out of the ring, injuries that he had in that 22 month layoff and Kostya's age were all being repeatedly brought up.

(In hind sight I wish I had posted this yesterday)

I had faith in a big win for Kostya before round 5.
For the simple reason that Kostya is not "just a great boxer", his determination and mental strength are phenomenal. Reading about what he has overcome in the past I find it hard to write off Kostya against any opponent. He is a real inspiration and a great champion.

How cool was KT when he had Mitchell hurt and he just stalked him.

Classic right hand straight down the pipe to a Sthpaw did the trick and when it came time to finish him off KT opened him up with 2 brutal body shots,that left to the ribs buckled SM.Brilliant.

Great fight to watch on how to fight a Sthpaw.

Didn't the corner do a great job on the cut? it could of bled into the eye but they had it sealed.

November 27 next,Morales v Barrera.3 and the undercard which is stacked!! 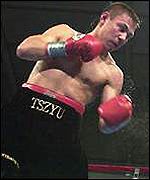 Kostya is awesome, thanks for the info guys.  I've read his book and even had it autographed by him.  One of my students was wearing a KT shirt and Kostya spotted him and waved him over to thank him.  He is a great and humble guy.

elvis where was your student at the time? Was he at arizona??

I also have an autographed book from kosta