Irving won’t play or practice with the Nets “until he is eligible to be a full participant,” Brooklyn general manager Sean Marks said a statement released Tuesday morning. He added, “we will not permit any member of our team to participate with part-time availability.”

New York City has a vaccine mandate that states Irving and other Nets and New York Knicks players must be vaccinated to play at Barclays Center or Madison Square Garden.

The Nets faced a scenario in which Irving would play road games but not home games – a suboptimal situation for any team but especially a team with the talent (Kevin Durant, James Harden) to win the NBA championship.

Instead of that in one game, out the next game scenario, the Nets have decided to play without Irving unless he becomes vaccinated.

“We’re looking at putting a group of people out there that are going to be able to participate fully, and that’s what this comes down to,” Marks said Tuesday on a conference call with reporters. “We’re not looking for partners that are going to be half-time. I don’t think that would be fair not only to the team, staff ownership and fans, but to be quite frank, not fair on Kyrie either when you’re putting somebody out there who potentially can’t get the right ramp-ups and build-ups and so forth and look as good as he or the team should.”

Marks said Irving will be paid for road games but will lose salary for each home game missed – approximately $381,181 per game.

Marks declined to indicate whether he thought Irving would be available and get this vaccine so he can play this season.

“I don’t want to speak for Kyrie,” Marks said. “At the right time, I’m sure he will address his feelings and what the path may be for him.”

Marks said the decision was made by himself and Nets owner Joe Tsai, and while he wouldn’t say how much Durant and Harden influenced the decision, a team wants sign-off from its stars on a major decision like this.t 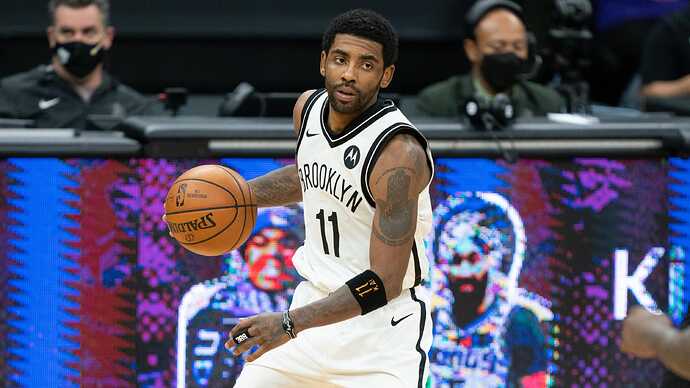 Nets ban Kyrie Irving from team activities 'until he is eligible to be a full...

The Nets faced a scenario in which Kyrie Irving would play only on the road – a tricky situation for a team with NBA title aspirations.

Irving is giving up 35 million this year!

So is he the only player that isn’t vaccinated?

Can unvaccinated players still take a test with negative result to play in NY? Seems like an unfair advantage if they are trying to force vaccination only.

Hopefully Kyrie sticks to his guns, says fuck you to them and ends up on a team where he can actually win a championship.

Hes ineligible to play home days due to NY’s vaccine mandate. And actually he cant play games in California either! Nets will be more than fine with KD and Harden. Dont need this distraction! Hes probably going to end up retiring imo!

Since he is eligible to play away games and practice I would imagine they will have to pay him for those games.

Or play for a team that isn’t filled with pansies.

No team is gonna touch him. Not nearly worth the headache for the amount of money he’s making

He should file a lawsuit against NY and the team. From my understanding their are exceptions to this new law that allow visiting players to be unvaccinated as long as they take a covid test.

Also if he already has covid antibodies then he should really test this new law in court.

Potentially. But I dont think any team wants to touch him even though hes a HOF PG. He really isnt reliable, last season he decided he needed time away. Maybe some team would want to sign him, but would it be for a team he would want to play? Would he sign with the Pistons for example?

theres also rumors that he will retire if the Nets force a trade.

Good to see he has continued his “research” practices from flat Earth theory to this latest idiot-obsession.

My brother in law is about to throw away a six-figure career because he’s similarly radicalized and conducting “research”. He’s not quite as wealthy as Kyrie though.

allow visiting players to be unvaccinated as long as they take a covid test.

This is my question, it would be unfair to not allow him to play if he could play there if he was simply on a different team.

Your brother in law has more balls than you’ll ever have.

I have never liked Kyrie… but I will support him now

It would be different if the vaccine actually worked, but it doesn’t.

It would be different if the vaccine actually worked, but it doesn’t.

A “researcher” has arrived.

35 million dollars worth of constitution. That is a strong will and conviction. Good for him. I wouldn’t blame him if he caves.

It’s too damn funny how some of you faggots don’t want people to make their own decision when it comes to their own bodies.

OP has a raging hard on for this BS.

The Nets are fucked if it lasts all season. Imagine not having Kyrie for home (and possibly away, if it’s the Knicks) games in the playoffs?

Hey psl, can you catch covid if you’ve had the vaccine?