No, it doesn’t. She said that she wrestled as a senior in high school, then started doing kickboxing and met Pat.

She said she first walked into Roufos Sport at 14, then left and came back at 17. She doesn’t say anywhere that she met Pat at 14.

I hadn’t read all Pat’s quotes when I posted above, and I agree…it’s creepy to hear a grown man talking about love at first sight with a 17 year old…but based on the timeline Pat describes, and Rose saying she met Pat when she started kickboxing AFTER she wrestled as a senior in high school…they both say they met when she was 17.

Not saying that makes it cool…but both of them are saying they met when she was 17, not 14 as people keep repeating here.

A few points here…just because they were in the same gym doesn’t mean Pat spent any time with her. The gym I was at had different classes for the women, we had like 20 women there most days and I didn’t know any of them. There were like 2 that hung around and rolled a little bit during the men’s classes from time to time, but it was rare, and they were adults…and they were really good grapplers…not high school girls just getting started in their training.

There were separate classes for the teens/kids also…and we were a small gym compared to Roufos sport. I highly doubt 14 year old girls are hanging out with the MMA fight team, especially 14 year old girls who are just starting to train as Rose described above. Even teenagers who were competing in grappling events, they didn’t practice with us and we never really crossed paths.

Was Pat running classes for the teenage girls? I haven’t read that anywhere, so it’s very possible I’m wrong. If he was teaching the beginner teen classes then started dating one of them, it’s weird as fuck. However, if he was just a top pro fighter from the gym? I doubt he ever really interacted with the teenagers, boys or girls.

Age of consent is 18 in Milwaukee.

“I say we’ve been dating for more than five years, but she says two or three years,” Barry says.

“We were apparently together a lot longer than I was aware of,” Namajunas says with a laugh. “It took him a while to chip away at my cold heart, but he did.”

^Disturbing and grooming if I ever saw it. 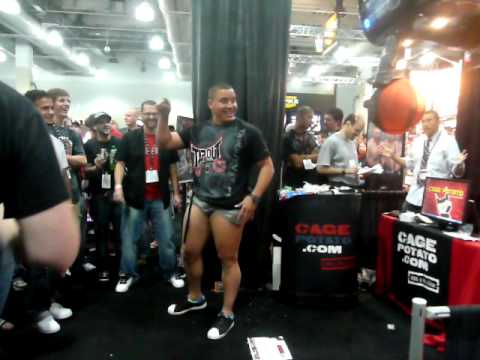 Legend has it that Pat is still kicking the punching machine

There is a reason why positions of authority like teachers, coaches, officers in the military have rules about relationships.

Not saying that makes it cool…but both of them are saying they met when she was 17, not 14 as people keep repeating here.

You trying to justify the ages is coming off as a little weird.

A. You are friends with Pat.

B. You have no issue with the ages. Imagine your 17 year old bringing home a 30 year old man.

Pat says he fell in love with her the moment he saw her. You guys can make up all the hypothetical scenarios you want but thats from him.

She was a young teenager from an abusive broken home starting MMA and a 27 year old UFC veteran at her gym fell in love with her. She was probably in awe a grown man ufc fighter had interest in her, and Pat was in awe of how sexy a 14 year old girl looked to him.

NICETO SEE YOU FLOPSTER. HAVENT SEEN YOU AROUND LATELY. HOPE EVERYTHING IS WELL FOR YOU AND YOURS!

LOL at all the molestation victims in this thread lashing out at Pat Barry.

Rose looks so fine with long hair, and I only get hard over sexy black and latina women.

We’ve been banging on about this before, this fuckin Jimmy Savile aspect of MMA.
Good of Sean to bring attention to this matter.
Let’s hope it gets properly investigated and peanut head gets locked up for a long time for grooming and statutory rape.

To be fair anywhere there’s a hierarchy of male-dominated power and young inexperienced women at the bottom, this happens.

You have something inherently valuable in young attractive impressionable women and men in the positron to take advantage if they’re scummy. Not everyone is able or willing and keep their hands out of the cookie jar which is why a system of vetting so important which almost never exists.

I got a source inside that gym. He’s pretty sure it happened. Plus, there’s a reason Megan isn’t training in Kansas City anymore and why she isn’t doing her mma show with sanko anymore either.

Low moral fiber and an Aussie accent, now I really want to fuck her…

Do you remember these forums when Barry started dating Rose? People were calling him a groomer creep and always taking shots at him for being a decade older with a 20 year old. Then when they took a break for a bit people were even more harsh. I just remember the comments were so disrespectful and Pat Barry was still posting here at the time.

She was so beautiful with hair. Now she looks like an Alien

Damn Krause is married and banging others? I had him pinned as a guy that had everything in line, he seems like such a great dude, I can’t picture him potentially ruining his family for a piece of ass

Lol@disrespecting a sexual predator . We know how this guy votes