Larry Bird is the best

“One of the first times I ever played against him, I went out for the opening tip and I went to shake his hand. He just stood there and looked at me stone-faced with his hands behind his back,” Wilkins said recently.

“I was like, ‘Whoa.’ Then we were getting ready for the tip and he says to me, ‘You don’t belong in this league, Homes.’ I couldn’t believe it, but it happened so fast, I didn’t know what to think.

“Then they had the ball and I was on him and he said, ‘I don’t know why they got you guarding me, Homes. You can’t guard me.’ Then, whap, he hit a 3. Then he came down again and said, ‘They made a mistake putting you on me, Homes,’ and he took another 3.”

Getting into the story, Wilkins began to act things out with his facial expressions.

“Then a little while later, I came down on a break and he was backpedaling. I just went right after him. I jumped up and he tried to challenge, but I took that right through the rim. He fell and hit the basket support.

He then paused the story, stepped back and smiled.


Bird at the All-Star 3 Point Shootout:

Michael Cooper shared this one:

“Larry walks in and says I hope all you guys in here are thinking about second place, because I’m winning this…’EXCUSE ME?!’

“And he started shooting and he just didn’t miss.”

Of course, he won, lifting his finger in the air before the final shot went in, and not even removing his warm up jacket.

The following year, in the same All-Star 3-point shooting contest Dale Ellis told the press that Bird didn’t have much to say this year. Bird said, “There’s no need to talk this time. We all know who’s going to win.”

Later on, after Craig Hodges won the NBA All-Star Game Three-Point contest in Bird’s absence, Hodges was asked if the victory was tainted because Bird hadn’t participated. “He knows where he can find me,” was Hodges retort. Told of Hodges’ challenge, Bird replied, “Yeah, at the end of the Bulls bench.”

Clyde Drexler has a memory of Larry from his rookie year:

“I was guarding him my rookie year, he looked at me and he goes “you can’t stop me”…I looked at him and said “gosh, boy you’re so confident”. He goes “Confident? You’re a rookie, you don’t know anything!”

“He proceeded to score 10 straight points on me, coach took me out the game, he walks by and he’s laughing at me.”

“I remember we were playing Washington in Washington,” said Chris Ford, his former teammate. “Larry just hit what would have been the game winning shot, but KC had called timeout.
“Larry came back to the bench and he was a little upset.”

“He looks at the bench”, recalled KC Jones, and says “you guys when I come back in from the timeout I’m going to go right to the same spot and I’m going to kick it in.”

“He told Washington he was going to get the ball,” laughed Ford.

And sure enough, he hit the shot.

“At the end of one of the trips,” Walton start. “He had accomplished every goal, we hadn’t lost a game on the trip and Larry told all of us players and the media too, we were all standing around waiting to leave, he said “Tomorrow night’s the last game of the trip, I’m going to play this one left-handed, at least through three quarters”.
“At the end of three quarters, the next night in Portland against poor Jerome Kersey, he had 27 points. It was a remarkable performance.”

Bird finished with 47 points, grabbed 14 rebounds and dished out 11 assists (21-34 FG). For good measure, he hit the game tying shot to send the game to OT, and then made the game winning shot.

Mark (Aguirre) hit a three pointer on Larry Bird and said ‘take a look at that’. Bird just came right back and hit three three pointers in a row, and said to him “You’re out of your league”.

Late in a tied game against the Seattle SuperSonics, Bird told Supersonics forward Xavier McDaniel, who was guarding him, “I’m going to get it [the ball] right here and I am going to shoot it right in your face.” As McDaniel remembers it, he responded by saying, “I know, I’ll be waiting.” After a timeout, Bird made two baseline cuts, then posted in the exact spot he had indicated to McDaniel, paused, turned, and made it in his face. He finished up the sequence by telling McDaniel, “I didn’t mean to leave two seconds on the clock.”

“I walked back to the sideline like, ‘damn!'”, concluded McDaniel.

On a West Coast trip in 1986, Bird told the entire Dallas Mavericks bench that after the time out, Ainge would inbounds the pass to DJ, who would hit Bird in the corner where Bird would step back and take a three. “So you got that?” Bird queried the bench. “I’m gonna stand right here. I’m not going to move. They’ll pass me the ball, and the next sound you here will be the ball hitting the bottom of the net.” And that’s exactly what happened. Bird winked at the Maverick before heading back down to the other end of the court.

I agree with OP. VU


And you're right mudflaps. Good thing there were no black people in the league back then.

Most of them wouldn't be able to play now either.

Yea, no shit, they are old as hell now.


And you're right mudflaps. Good thing there were no black people in the league back then.

Most of them wouldn't be able to play now either.

Yea, no shit, they are old as hell now.

It is true the league is way faster and more athletic....but that is true of the white guys in the league as well.
Its not some spontaneous evolution that caused it, its better diet and conditioning methods.....which would have been used by Bird as well.

Just matching him against another tall white guy who is considered a good player, do you really look at Kevin Love and think, 'damn, no way Larry could match what that guy does!'
Stern February 9, 2015, 5:33pm #14

Greatest basketball player of all time.

You're right. Kobe or Labron would start throwing elbows, and Larry would fold like a lawn chair. Just go to pieces and cry. 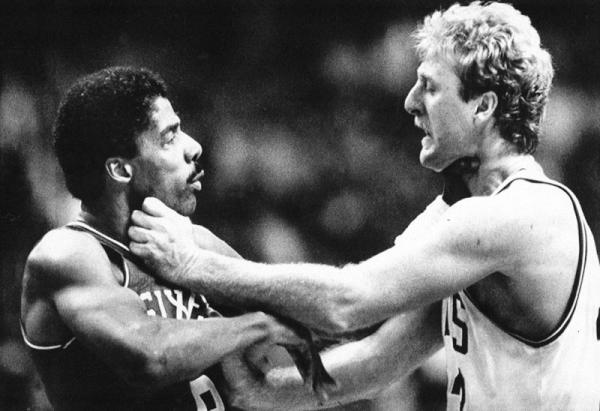 Larry was a beast. And he had a ridiculous work ethic.