This is a great add on to this card. Often was wondering if Lawler would go back to Welterweight.

So you mean it's NOT happening? The exclamation mark threw me off. :(

So you mean it's NOT happening? The exclamation mark threw me off. :(

Oh, snap. It is? When the TS wrote "What's everyone think?" I assumed he was asking if people thought the UFC should make that fight. 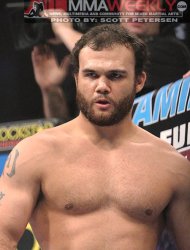 Promotion officials are currently hard at work trying to assemble the UFC 157 fight card, and it looks like they’re trying to fill it up before everyone checks out for a little holiday cheer.

The UFC announced a couple of UFC 157 bouts on Wednesday, and MMAWeekly.com confirmed reports of an as yet unofficial match-up between Josh Koscheck and former Strikeforce fighter Robbie Lawler.

The Koscheck vs. Lawler bout was first reported by the Orange County Register.

The two will meet in a welterweight match-up on Feb. 23 at the Honda Center in Anaheim, Calif.

Koscheck (17-6) enters the bout coming off of a split decision loss to Johny Hendricks at UFC on Fox 3 back in May. He had been slated to face Jake Ellenberger in September, but had to pull out of the fight due to a back injury.

Lawler (19-9) has had a much rougher go of it over the past few years. His tenure in Strikeforce never saw him gain any traction, amassing a 3-5 record while fighting for the promotion.

He’ll be looking to ignite a new spark in his career at UFC 157. The fight marks Lawler’s drop to welterweight and his return to the Octagon.

Lawler rose to prominence during his first tenure in the UFC, fighting there from 2002 to 2004, primarily as a welterweight.

Exclamation point = as of right now it is happening.

If Robbie can remain standing, he's got a good chance of Ko'ing Kos

Would love to see Robbie knock Fraggle out

Gonna be a fun fight. Robbie is training for this fight with one eye closed.

Gonna be a fun fight. Robbie is training for this fight with 1 eye closed.

Terrible fight for Robbie. One and done for this return to the Octagon.

as much as id like to see koscheck get his head punched off ,i dont see it going down that way. lawler will get taken down repeatedly

After they should book Lawler vs Hieron, return of 04

Wow that's a tough fight back for Robbie. But with a win he is in the mix for a contender fight

I could think about about 50 more exciting style match ups for Lawler. Seems like a waste. Glad to see him back in the UFC though.

Favour Koscheck though, he'll appreciate the stand-up advantage Lawler has and stick to keeping Robbie off* his back.

Robbie fights southpaw so expect some straight lefts to kos' messed up eye.

Lawler vs story would be better.