Coming SOON to an AReNA NEAR  You

woulda been nice but it looks like the purported MVP cant hit his shots and lead his team to victory in critical do or die playoff games. 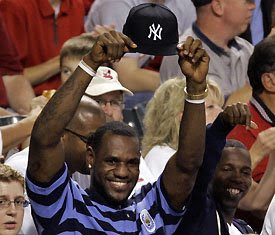 He wants to win it in New York, I think he's sick of Cleveland.

damn ...i really think the guy was just exhausted trying to run the squad all the time. he was taxed out and drained imo.. i dont think NY is gonna be a better contender than cAvs tho imo