LeBron James took his talents to the movies this weekend and came away with a hit.

“Space Jam: A New Legacy,” which stars James alongside the Looney Tunes, brought in an estimated $31.6 million in its North America opening this weekend. That exceeded industry expectations, which projected the film to bring in closer to $20 million for its debut.

That number is somewhat surprising for a few reasons.

For starters, the Warner Bros. film was widely panned by critics. The sequel to the 1996 family movie starring Michael Jordan, has a 31% score on review site, Rotten Tomatoes. (Warner Bros., like CNN, is owned by WarnerMedia.)

However, it looks like the reviews didn’t matter much to consumers, who gave it an 81% audience score on Rotten Tomatoes and an “A-” on CinemaScore.

James himself even commented on the bad reviews by tweeting out a story about the film’s positive box office totals alongside a comment that read, “Hi Haters!” 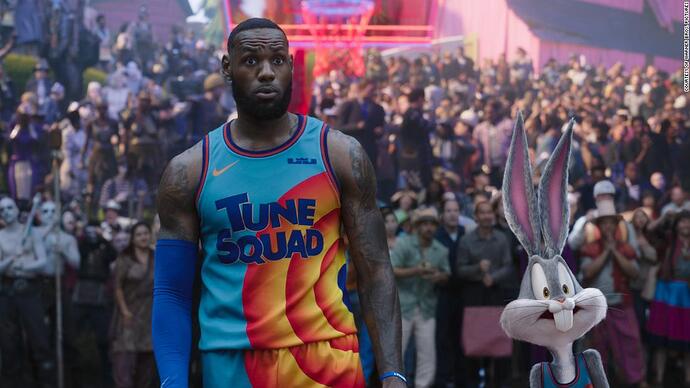 LeBron James took his talents to the movies this weekend and came away with a hit.

LeBron James yet again with a classic clap back to his haters.

You couldn’t pay me enough to go to a theater and see this movie with all the hood rats in attendance.

It will be interesting to see if it has the staying power of Jordan’s Space Jam. The original made $27MM it’s opening weekend and more than tripled that number ($90MM) by the time it was out of theaters.

The post-Covid box office has been extremely weak after the first weekend of films, as more people opt to watch at home rather than go to theaters. The latest installments in the Fast and Furious and MCU franchises both lost about 2/3rds of their opening box office in week two, while the latest Quiet Place and Godzilla installments both lost nearly 60% of their opening weekend take. Those are the top four grossing films of 2021 and the only ones to crack $100MM. Only 5th place Cruella managed a second weekend drop of under 50% (by one percentage point).

Post-script: While researching that post, I noticed that every one of the top six grossing movies in the domestic market in 2021, and 13 of the top 15 top grossing films, are sequels/prequels/spinoffs of existing IP. Disney’s Raya and the Last Dragon is the only American film based on an original script to crack the top 15. Un-fucking-believable. Burn, Hollywood, burn!