Ok, so I know this is a hot button topic as those on both side of the fence defend their position with almost rabid ferocity.

Those that are fully on the climate change bandwagon say we are all dead in 10-15 years while those on the opposite side say it's a huge hoax, but what is the absolute truth here?

Isnt it fair to say that we are probably fucking up the planet and should make some changes or we may do irreparable damage, or is the situation as dire and as close to a doomsday scenario as Greta and her followers say?

So what say you, OG? Is this the beginning of the end for humanity if we don't make an immediate change? Is this all alarmist bullshit? Are both sides somewhat right?

I haven't seen enough data to determine if it's a hoax or not. I'd lean towards exaggerated rather than a complete hoax. Scientific models quite often overestimate long term effects because they never take into account modifications or adaptations in behaviors and technology. Theyre usually used to try and raise money so are quite often biased as well.

But regardless I feel like the conversation being about climate change is really frustrating. There are lots of holes you can poke in the issue and it makes people not want to fix the problem.

I don't know where you live but I am living in London right now and the pollution is awful, you literally choke on the diesel fumes, it causes your skin to break out in hives, it's really uncomfortable and the issue is very real and tangible.

Air pollution is an issue that's easily quantifiable and you can't deny it so why can't we talk about that? Why can't we fix that issue... I feel like moving the topic to climate change just makes politicians not have to fix the real problems like air pollution, plastic pollution, etc.

Are people really saying we are dead in the next 10 or so years? I haven't heard that at all.

We should clean up our act plain and simple. I don't care if other countries don't do it which seems to be the single dumbest talking point ever. 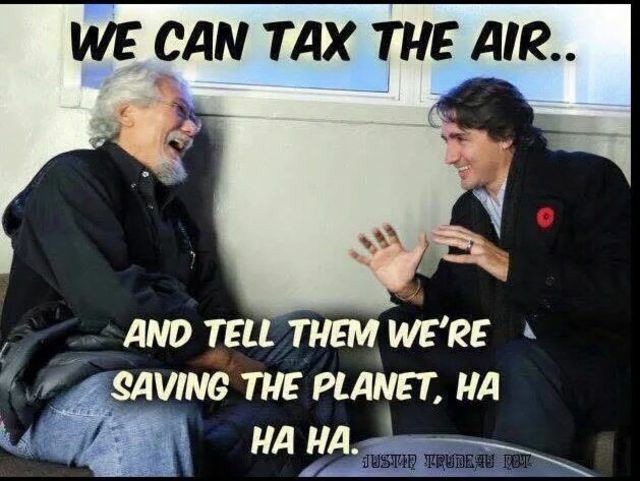 I was going to type out a long paragraph but this pretty much sums it up.

We have the technology now to do things cleaner so we should. We should care for our planet and habitat. That said, being taxed more does fuckall for the planet and there's clearly a lot of unfounded hysteria.

I doubt that a single person here is qualified to have this conversation.

This is like going to a bunch of 4th graders and saying "lets talk the oedipal implecations of hamlet's hamlet".

There's a good conversation to be had, but only by people well educated enough to make it worth while.

I think its easy to come to the conclusion we have an impact. I don't think the left has the people skills to actually explain a problem properly without the chicken little theatrics. I object more to the proposed "fixes"  than to the idea of their being climate change caused by man.

Here are my main objections

- Nobody has suggested anything seriously to combat CC. No the GND was not serious

Once again it seems like a "Do what I say, not as I do situation". Look at the Climate Change rally in DC recently. They left a ton of garbage behind for others to clean up.

This is someone actually doing something. But because their conservative activists the media is silent

Where are all those people yelling at? At home with the AC blasting, lights on in day time in 5 rooms they aren't in, playing on their PC's. So your telling me there is this huge problem we only have 15 years to fix and you can't bother to do anything to help? If it is the huge problem like the alarmist claim they seem to be doing less than everyone else. Yet everyone else is supposed to take their cries seriously?

The best summary of this subject ever.

A major concern that I rarely hear discussed is ocean acidification. That's a real thing caused *I believe* by carbon issions that end up in the ocean.

We need to do something about that regardless of climate change.

It's a very real problem but North America and Europe are doing all we can to prevent it without knee capping ourself completely. India/China's air pollution and Indonesia/the Philippines water garbage  are doing more damage than we could ever do. NA and Eu could completely go Amish and the world would still be fucked because of those bug people

Garbage and other types of chemicals that get dumped yes. The whole co2 bullshit is just that.

I'm mostly on board with Serge's summary. My real issue is with the inaccuracy of the predictions models. We don't know how much we can change for how much sacrifice.

It might already be to late and if so we better off putting resources into mitigating the effects of CC than in trying to stop it. E.g. build seawalls, plan for mass migrations, etc.

The thing that really gets my goat is how the whole Climate Change discussion is being tied to Social Justice by far left wing reactionaries. This is going to put actual progress with Climate Change back years. They refuse to accept the idea that Solar and Wind are not answers to every fucking problem.

Solar and Wind are not renewable energies. The sources are, yes, but you still need to produce the panels, maintain the panels, replace the panels, so on so forth. They cost valuable resources, time, and effort. The production of them is also not entirely safe as far as the environment is concerned. But all together that is still small time stuff. The major issue is storage of the energy, which requires batteries. Batteries of that size are massive, expensive to make, and extremely unfriendly to the environment. Energy storage and capacity are the two biggest issues right now to future green energies. This is where Nuclear comes in. It is the safest, most efficient, reliable source of energy we have right now until we figure out Fusion.

They need to smarten the fuck up.

Its exists, we contribute to it, and we should fix it by whatever reasonable means necessary. If you think we're going to die in ten years because of it or that it's a hoax created by the Chinese or Democrats you're an absolute fucking moron.

Climate change is real, and humans contribute to it.

There needs to be substantial investment worldwide into renewables and more efficient energy.

Nuclear power is not the boogeyman leftists think. Trying to cut all fossil fuel use within 10-15 years is laughable.

We are not in the midst of a "global catasrophe" and that type of fear-mongering is redundant.

Propping up a literally retarded child as the face of global climate change is worse than when Al Gore was personally enriching himself off of "global warming" a decade ago.