Jesus, Kimbrel is a liability

Kimbrel and Jansen both showing why each of their former teams moved on from them.

you are right about you suck dick

you are right about you suck dick

What are you on about? The Braves basically forced him out.

This is still mostly a faggot thread

So far so good…

The Mariners and Angels had a bench clearing brawl 8 people ejected. 3 of the Mariners top 4 in the order got the boot. 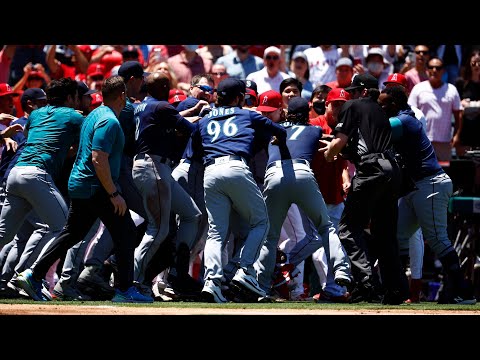 Dodgers vs. Braves lived up to the hype. That was like a playoff series.

The Mariners and Angels had a bench clearing brawl 8 people ejected. 3 of the Mariners top 4 in the order got the boot.

Stopped watching just after halfway through. Did anything eventually happen or was it another several minutes of nothing?

how the fuck did atlanta blow that game…

Rondon slapped the shat out of him.

Not pros, but I enjoyed the college world series this year, and not just because I’m an Ole Miss alum. Literally the last ones added to the tourney, and they walked away with the title.

That final game yesterday - man, I feel so bad for that Oklahoma pitcher, that kid was DOMINATING - gave up a single homer but had ~13 Ks in 6 innings. Left the game with a 1-0 lead and the relievers who came in lost it for them (catcher didn’t help, either).

Saw lots of good pitching on almost all the CWS teams this year, for that matter.

Rendon was the first guy out of the dugout even though his arm was in a cast. Ill give him credit for that even though he sucks. All Trout did was hug justin upton

Yeah if I was Mike Trout that’s all I would’ve done to. Hopefully he gets traded out of there this year. There is absolutely no sense for that team to have him there or for him to want to stay there.