Liberals fleeing Portland due to policies they voted for 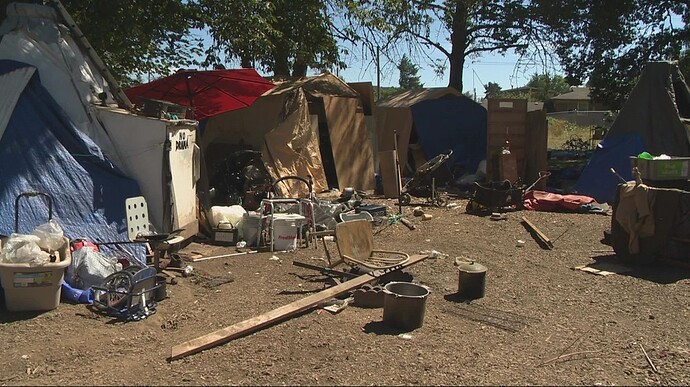 Homeless camps along the Peninsula Crossing Trail have prompted some nearby families to sell their homes.

DESANTIS should put a buying ban on all people from NY, NJ, OR, CA, IL and any other liberal utopias. Wallow in the piss and shit you voted in!!! hahahhaha

Don’t come to my state.

DESANTIS should put a buying ban on all people from NY, NJ, OR, CA, IL and any other liberal utopias. Wallow in the piss and shit you voted in!!! hahahhaha

THIS a million times. They will just keep voting for democrats anyway. I always said they are not escaping. They are spreading. They fuck up one place, and then repeat the same bullshit in another.

I drive by Portland almost weekly… its insane the amount of the homeless camps there… almost as bad as Seattle.

Portland doesn’t represent 90% of how Oregon is

Sure doesnt. I love Burns Oregon. If it wasn’t associated with Portland due to taxes and all that, I’d like to retire there.

But will these demented lib shitheels learn?

I live here, and in fact am maybe a mile from that camp. It’s hilarious seeing these over the top D bag libs complain about shit where just a few years prior they were cheering for small businesses to get burned down. One uber-D I know mentioned how he just bought a gun (and in fact we both ‘hunted’ a homeless dude that was breaking into houses while folks were there…long story there though…). Another over the top Dbag who posts on insta all the time about Republicans being ______ literallly put his house on the market and is moving to an R town on the coast.

As a funny aside today someone pulled a camper and parked under my tree on the side street. I went out there and yelled if that piece of shit is here at sundown I am towing it down the street. No reply. Went and fired up my chainsaw, popped my garage open, and ran the shit while yelling at the driver that I will destroy all his possessions and tow them away if still there at sundown. Turns out they were just taking pics there for their Craigslist ad since it was the only shade/not backlit spot around.

Whatever, fuck 'em, sentiment stands. You there in a shit camper at sundown, I tow your ass away and leave your shit in the middle of Lombard.

Portland and Seattle for Hong Kong. Make the trade.

LITERALLY ON MY WAY UP THERE TO RACE SOME SUPER CARS AT THE TRACK … STAYING A DAY AND GETTING THE FUCK OUT. PLACE HAS TURNED SO SHITTY IN THE LAST FEW YEARS

I’ll buy you a beer post-PIR. DM me. Gonna prove once and for all that 1) you’re white and 2) you’re sexy

They voted for homeless encampments?

Well they better not go to the mean streets of West Linn! Never piss off a gangster …

They voted for homeless encampments?

Guilty by association. Those 90% of good people stood by silently while Portland systematically destroyed everything they held dear. It’s a little late now to be sympathetic to the weak sheep who did nothing.