Migrants from west Africa being ‘sold in Libyan slave markets’ 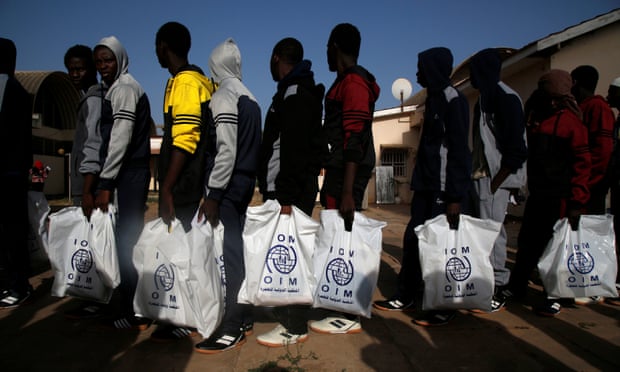 West African migrants are being bought and sold openly in modern-day slave markets in Libya, survivors have told a UN agency helping them return home.

Trafficked people passing through Libya have previously reported violence, extortion and slave labour. But the new testimony from the International Organization for Migration suggests that the trade in human beings has become so normalised that people are being traded in public.

“The latest reports of ‘slave markets’ for migrants can be added to a long list of outrages [in Libya],” said Mohammed Abdiker, IOM’s head of operation and emergencies. “The situation is dire. The more IOM engages inside Libya, the more we learn that it is a vale of tears for all too many migrants.”

The north African nation is a major exit point for refugees from Africa trying to take boats to Europe. But since the overthrow of autocratic leader Muammar Gaddafi, the vast, sparsely populated country has slid into violent chaos and migrants with little cash and usually no papers are particularly vulnerable.

One 34-year-old survivor from Senegal said he was taken to a dusty lot in the south Libyan city of Sabha after crossing the desert from Niger in a bus organised by people smugglers. The group had paid to be taken to the coast, where they planned to risk a boat trip to Europe, but their driver suddenly said middlemen had not passed on his fees and put his passengers up for sale.

“The men on the pick-up were brought to a square, or parking lot, where a kind of slave trade was happening. There were locals – he described them as Arabs – buying sub-Saharan migrants,” said Livia Manante, an IOM officer based in Niger who helps people wanting to return home.

She interviewed the survivor after he escaped from Libya earlier this month and said accounts of slave markets were confirmed by other migrants she spoke to in Niger and some who had been interviewed by colleagues in Europe.

“Several other migrants confirmed his story, independently describing kinds of slave markets as well as kinds of private prisons all over in Libya,” Manente said. “IOM Italy has confirmed that this story is similar to many stories reported by migrants and collected at landing points in southern Italy, including the slave market reports. This gives more evidence that the stories reported are true, as the stories of those who managed to cross-match those who are returning back to their countries.”

After his sale, the Senegalese migrant was taken to a makeshift prison of a kind that has been well documented in Libya. Those held inside are forced to work without pay, or on meagre rations, and their captors regularly call family at home demanding a ransom. His captors asked for 300,000 west African francs (about £380), then sold him on to a larger jail where the demand doubled without explanation.

Men who lingered there too long without the ransom being paid were taken away and killed, he said. Some wasted away on meagre rations in unsanitary conditions, dying of hunger and disease, but overall numbers never fell. “If the number of migrants goes down, because of death or someone is ransomed, the kidnappers just go to the market and buy one,” Manente said.

If you showed this to any BLM gayboy or thug in the streer they would NOT give a flying fuck.

"Who give a fuck bout dem niggas?"

Not black Americans. That's for godamn sure.

But you know... #blacklivesmatter when we can get free opportunities, money and items. Otherwise "fuck a nigga".

Well, we have our own problems right here. Young, black men getting killed for no other reason than they tried to murder a cop.

fair enough, I would comment that your ability to recognize sarcasm is lacking as well though.

Similar shit will happen in Syria if Assad is removed.

Bartertown is in Libya

Pretty sad situation, hope some stability and order, and eventually freedom, come to the area.

Not sure why some of you keep bringing up black-on-black slavery-- that's not what is described here.  These are sub-saharan (black) migrants getting detained/enslaved when they go north/west in Libya.

That part of the world has some truly fucked up people. Crazy that shit goes on in public.

THIS IS LIBERATION ACCORDING TO THE AMERICAN PEOPLE.

EVIL OBAMA overthrew this stable socialist dictatorship and replaced it with Muslim Militants that are now enslaving and lynching blacks. Women are also repressed there now.

this is the shit you guys supported.. and you accuse me of being COLD HEARTED because I think they staged a school shooting? did I wish death upon anyone? many of you did when you RALLIED for this war.

Back from the dead - Similar shit will happen in Syria if Assad is removed.

Do people here seriously not realize how evil the Obama admin was when they deposed of Ghadaffi? they destoryed a high functioning socialist paradise based on BULLSHIT.

now blacks are getting enslaved.

The whole place is a wreck.

I cannot believe the evil. The american people have been inducted into a SATANIC CULT.

What happened to Libya is too shocking for words. Worse still, the US has received zero blowback from the international community, even though our current geopolitical landscape/clusterfuck has been forever marred by the actions of these 2 previous administrations.

Their actions will be felt for generations in these countries, and yet here they are gearing up for ANOTHER round of 'let's turn a functioning state into dystopian hell-hole'.

Fuck you Obama. Fuck you Trump. Fuck you Bush. Fuck you Blair. Fuck you Cameron. Fuck the fucking lot of them.

Back from the dead - Similar shit will happen in Syria if Assad is removed.

Only white Americans are racist

Soooo we bid online or in person or what's the deal?