"Living with Covid" is now a "Plan"

its a major nuisance for fragile people.

bars and restaurants are far, far more affected just by the sheer number of people who have omicron and having enough healthy staff to keep operations running than they are by mask mandates.

if you say so. what businesses do you think are closed or have capacity restrictions?

its a major nuisance for fragile people.

bars and restaurants are far, far more affected just by the sheer number of people who have omicron and having enough healthy staff to keep operations running than they are by mask mandates. 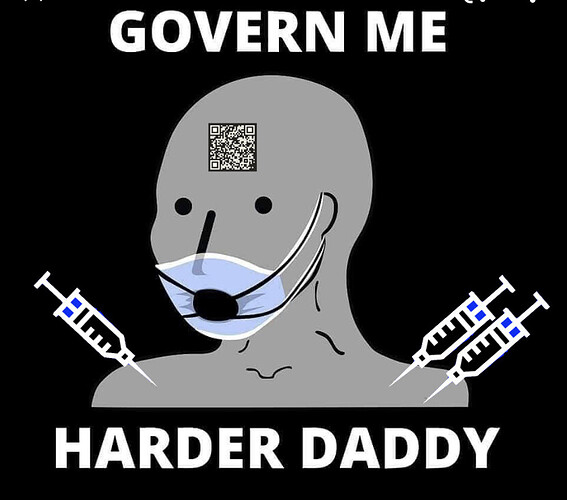 Is there an island somewhere for people with testicles? I want to live there. Nohomo.

Know what guys, we live like this if we choose to comply. Just saying no is fun as fuck. It becomes an art form.

I straight up look people in the eye and say “were shaking hands aren’t we?”…holding my hand out.

People feel obliged to shake at that point. Haha.

The Omicron Shift in Europe: Pandemic or Endemic?

A number of governments have changed their approaches to the coronavirus, to one that is more like how we treat the flu. Public health experts say it’s too soon to make that call. 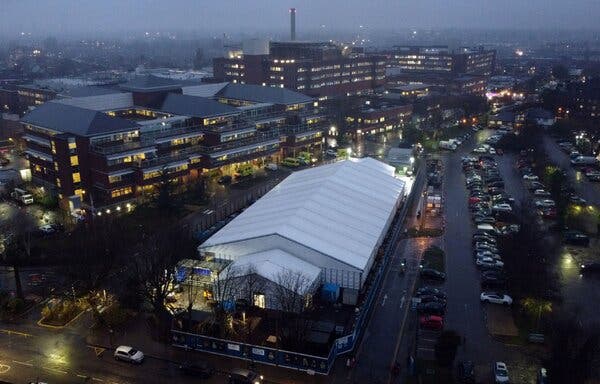 A temporary field hospital this week on the grounds of St. George’s Hospital in London.Credit…Hannah Mckay/Reuters 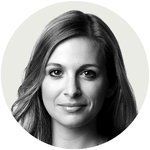 LONDON — In Britain, France, Spain and other countries across Europe, politicians and some public health experts are pushing a new approach to the coronavirus pandemic borne of both boldness and resignation: that the illness is becoming a fixture of daily life.

Governments are seizing a moment in which their populations have experienced less severe illness, and, in some instances, a drop in new daily cases after weeks of record growth. And they are moving their mitigation policies off emergency footing.

In Spain, for instance, Prime Minister Pedro Sánchez declared last week that citizens would “have to learn to live with it, as we do with many other viruses,” and said that the country should adjust the national approach to more closely align with how it handles influenza outbreaks. Olivier Véran, the French health minister, said recently that France’s high level of infection and strong vaccination rate could “maybe” mean this would be the final wave.

The shift comes even as the World Health Organization cautioned this week against treating the virus like the seasonal flu, saying it was too soon to make that call. Much about the disease remains unknown, the W.H.O. said. And a surge in cases driven by the Omicron variant is still battering the continent, while the population of much of the world remains vulnerable because of a lack of widespread vaccination, and more variants are still likely to arise.

Still, advocates of the “learn to live with it” approach point out that the latest surge in cases is different from the early days of the virus in several important ways, including a largely vaccinated population in parts of Europe, especially in the West, and a far lower rate of hospitalization.

The sentiment is evident in the evolving policies that the British government has adopted since the start of this year, a stark departure from the “war footing” that the country’s health service preached in December.

The changes include shorter isolation periods and the elimination of pre-departure tests for people traveling to England — largely because Omicron was already so prevalent that the tests had a limited effect on its spread. 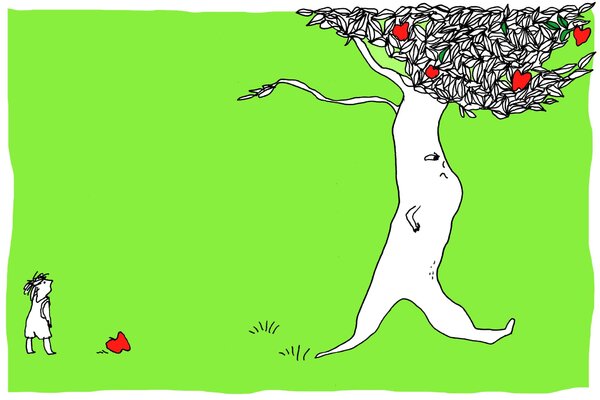 Mommy Is Going Away for a While

](Mommy Is Going Away for a While - The New York Times) 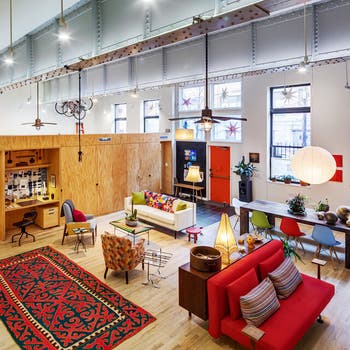 They Remodeled Before Covid. Here’s What They Regret Now.

](They Remodeled Before Covid. Here’s What They Regret Now. - The New York Times) 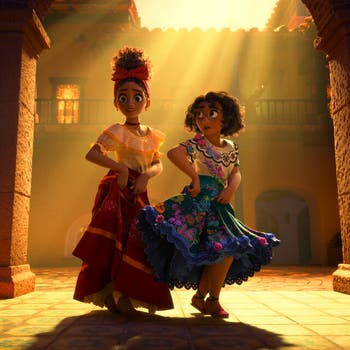 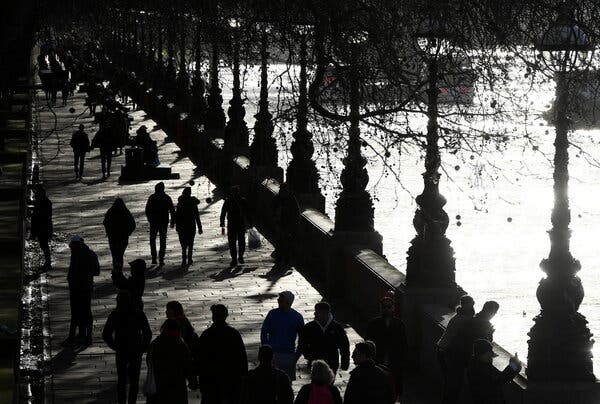 People in London walking along the National Covid Memorial Wall, which has thousands of hand-painted hearts and messages for those who have died from the virus.Credit…Toby Melville/Reuters

“It can’t be an emergency forever,” Graham Medley, a professor of infectious disease modeling at the London School of Hygiene and Tropical Medicine, told BBC Radio 4 this week. He added that the end of the pandemic was likely to occur in phases rather than appear as “an active point in time” when it can be declared to be over.

Amid this shift, the messaging to the public has varied, often in confusing ways. The guidance can be all over the map, with some politicians declaring the latest wave over and others advocating a gradual return to normalcy — all while many experts express caution about all of the unknowns and the potential for new variants.

Peter English, a retired consultant in communicable disease control, said that for many public health experts and scientists in Britain, the debate had shifted away from lockdowns to common sense mitigation measures. Most are now encouraging measures like mandatory masking in public settings and legislation for ventilation standards.

“There had been an argument about zero Covid and trying to eliminate the virus through restrictions,” he said. “I think that we’ve lost that argument. I think that by allowing it to spread to the extent it has, it will be very, very difficult to put the genie back into the bottle.”

From that perspective, he said, “we’re going to have to live with it being endemic.” But, he added, “Endemic doesn’t mean not serious,” and he urged caution against the idea of simply “learning to live with it” without mitigation measures in place.

One of the biggest concerns in England has been the intense pressure that the virus puts on the National Health Service, or N.H.S. But some of the immediate concerns that Britain’s hospitals could become overwhelmed with patients during this latest wave have begun to ease.

Matthew Taylor, the head of the N.H.S. Confederation, a membership organization for the heads of hospitals, said on Wednesday that “unless things change unexpectedly, we are close to the national peak of Covid patients in hospital.”

In Spain, a new monitoring system is being created to come into effect once the current surge in cases ebbs, and the country also recently relaxed its isolation rules. But Madrid’s push for Omicron to be treated more like the flu has been criticized by some doctors and professional associations, as well as by the European Medicines Agency, who say the virus is still behaving as a pandemic. 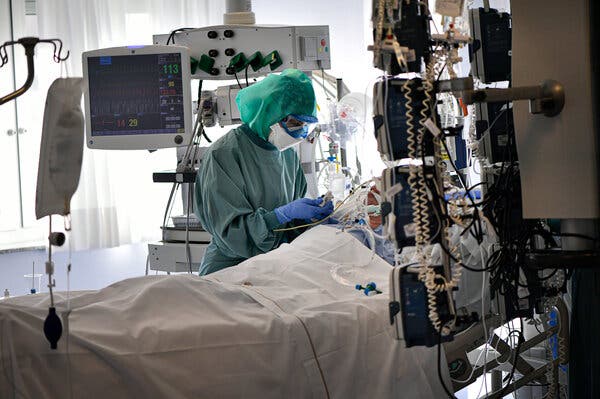 Attending to a coronavirus patient in an intensive care unit this week in Pamplona, Spain.Credit…Alvaro Barrientos/Associated Press

In France, infections are still trending upward, with nearly 300,000 newly reported coronavirus cases a day this week, almost six times as many as a month ago. But President Emmanuel Macron, who is facing a presidential election in April, has opted to keep minimal restrictions in place and focused instead on urging the French to get vaccinated.

Mr. Macron’s government has rejected accusations that it has given up on reducing the number of cases, including in schools, which faced widespread strikes on Thursday by teachers concerned with classroom safety.

Mr. Véran, the French health minister, who tested positive for the coronavirus on Thursday, said the authorities were keeping a close eye on data from Britain to ascertain whether France was nearing its own peak. 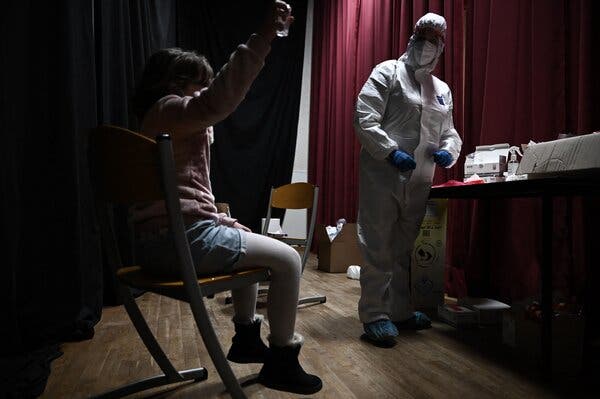 A child taking a Covid test this week at a school in La Rochelle, France.Credit…Philippe Lopez/Agence France-Presse — Getty Images

Germany is several weeks behind some of its European neighbors in confronting an uptick in infections. It reported 80,430 new cases on Tuesday, breaking a record set in November. But independent scientific experts have held off advising the government to impose new restrictions despite widespread agreement that infection numbers would continue to rise.

Christian Drosten, the country’s most famous virologist, noted that Germany would most likely eventually have to move to treating the virus as endemic.

“Let’s put it this way: We shouldn’t open the gate completely,” he said last week in a podcast interview. “But in some areas, we have to open the door to the virus a bit.”

The latest Covid data in the U.S. As the Omicron surge causes case counts to reach record highs and hospitalizations to surpass last winter’s peak, here’s how to think about the data and what the early numbers suggest about the variant’s potential toll and possible peaking in parts of the United States.

The U.S. Covid response. President Biden announced that the U.S. government will buy 500 million more tests for distribution to Americans, doubling its previous purchase. He also said he will deploy military personnel to help overwhelmed hospitals in six states and pledged to provide free high-quality masks.

Around the world. The future of British Prime Minister Boris Johnson is in doubt after he admitted attending a party that violated lockdown rules. In France, teachers staged a one-day walkout against relaxed Covid testing rules that they fear will lead to more infections.

Staying safe. Worried about spreading Covid? Keep yourself and others safe by following some basic guidance on when to test and how to use at-home virus tests (if you can find them). Here is what to do if you test positive for the coronavirus.

Italy, too, is grappling with some of the highest daily infection rates since early in the pandemic. But in recent weeks, it has tightened restrictions, making vaccines mandatory for those 50 and over, including requiring a health pass to use public transportation.

A spokesman for the Italian Health Ministry said that the country was “still in a delicate phase,” and that the recent daily surges in cases continued to put pressure on intensive care units. Italian scientists have tended to agree that it is too early to declare the situation endemic, even if the time had come “to start thinking about the new normal” of coexisting with the virus, said Fabrizio Pregliasco, a virologist at the University of Milan. 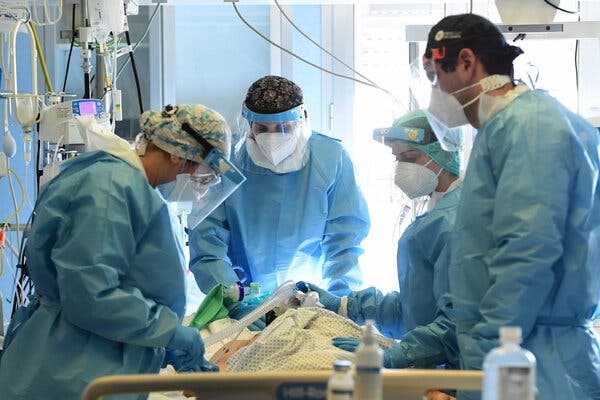 An intensive care unit this week in Cremona, Italy. Medical and health professionals worry that a surge in cases could overwhelm the country’s hospitals.Credit…Miguel Medina/Agence France-Presse — Getty Images

That kind of caution is evident among a wide array of health professionals and researchers across Europe, some of whom issued a plea this week in The British Medical Journal for better coordination in approaching the pandemic. They argued that there was still an urgent need to “reduce infections to avoid overwhelming health systems and protect public life and the economy .”

“Even under the most optimistic assumptions,” they wrote, “letting Omicron run unfettered risks potentially devastating consequences.”

In England, hospitalizations are still very high in some areas, particularly in the northeast, and illness among health care workers is still straining the system.

England needs to take a “thoughtful, managed approach” to the pandemic, “while thinking about what our new normal will look like,” said Saffron Cordery, the deputy chief executive for N.H.S. Providers, the membership organization for England’s health staff.

But, she added, it was clear that the country had started to develop a pattern of living through several waves of the virus. With much uncertainty still ahead, she said it would be misguided to think of this moment as an inflection point.

“Rather than being a 100-meter straight-line sprint down to the finish line of Covid,” she explained, “it’s more of a longer-term cross-country run through all sorts of different terrains before we get to that destination.”

I don’t understand this fear of covid. Do the people who are fearful of covid get scared and worry about every other thing that has a tiny chance of killing them? Like do they have panic attacks and worry about driving every day or crossing the street?

Well until everybody gets vaccinated, we’re going to have to

Jaja still afraid of a virus you’re vaccinated for