China's doctors are beginning to speak of a link between air pollution and lung cancer. Children as young as 8 have been treated.

BEIJING — The youngest known lung cancer patient in eastern China is an 8-year-old girl whose home is next to a dust-choked road in heavily industrialized Jiangsu province.

Another patient was a 14-year-old girl from Shanghai, the daughter of two nonsmokers with no family history of lung cancer.

Back in the 1970s, when Bai Chunxue was in medical school, the textbook lung cancer patient was a chain-smoking male in his 60s. Nowadays, Bai, one of the physicians who treated the teen, sees so many who are still in their 20s that the cases blend together.

"When I see patients who are not smokers with no other risk factors, we have to assume that the most probable cause is pollution," said Bai, who works at Shanghai's Zhongshan Hospital and is chairman of the Shanghai Respiratory Research Institute.

Increasingly, other Chinese physicians are reaching the same conclusion. At a time when cigarette smoking is on the decline in China, the nation is facing an explosion of lung cancer cases.

From 2002 to 2011, the incidence of lung cancer in Beijing rose to 63 cases per 100,000, from 39.6, according to municipal health authorities. Nationwide in the last three decades, an era in which China opened up its economy and industrialized, deaths from lung cancer have risen 465%.

In a country that manufactures 1.7 trillion cigarettes a year, smoking is still cited as the leading cause of lung cancer. But these days, only about half of Chinese men smoke, down from 63% in 1996.

The additional culprit, doctors believe, is the fine particulate matter known as PM 2.5, the microscopic particles from exhaust, coal smoke and vehicle fumes that can burrow their way into lungs.

Readings in Beijing and elsewhere in northern China frequently climb straight off the chart devised by the World Health Organization, which classifies particulate levels between 300 and 500 micrograms per cubic meter as hazardous.

The northeastern city of Harbin practically closed down for two days in October when readings approached 1,000, creating air so murky that residents said they couldn't see their dogs at the end of the leash.

The episode was reminiscent of the famous London smog of December 1952, when deadly pollution caused in large part by the burning of coal lasted for five days, leading to an estimated 12,000 premature deaths, according to a 2002 study by British health officials.

Note to self: Invest in novelty smog masks.

What a shit hole

Lung cancer benefits the Chinese people in the following ways:
1) It strengthens the gene pool by minimizing weaknesses
2) It addresses the problem of over-population
3) It promotes equality, as cancer does not discriminate
4) Lung cancer promotes the economy of pharmaceuticals and medical treatment

Right on schedule to evolve into a new, cancer resistant Chinese people. 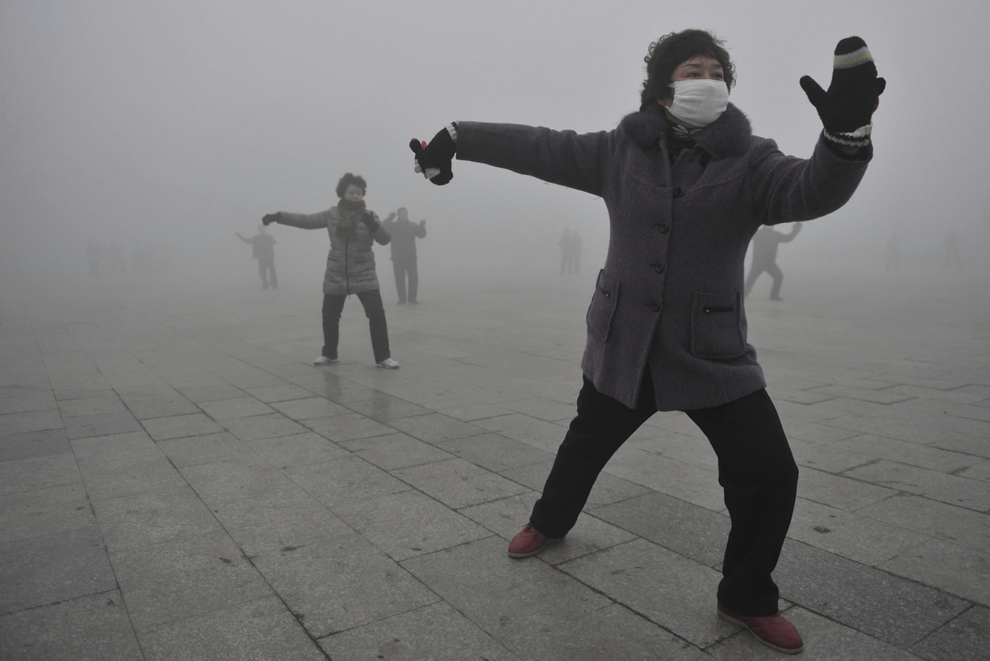 Nothing to see here!

beerbelly - Nothing to see here!

thats not funny atleast get it right

the chinese nsa is ineffective due to the smog
-ey

The smog just shows how far the Chinese people have come.

The smog just shows how far the Chinese people have come.