Any other fans of this gun here? I’ve been a fan since I got my first one about 30 years ago. An original East German 1962 vintage. Surprisingly accurate pistol and great carry size. 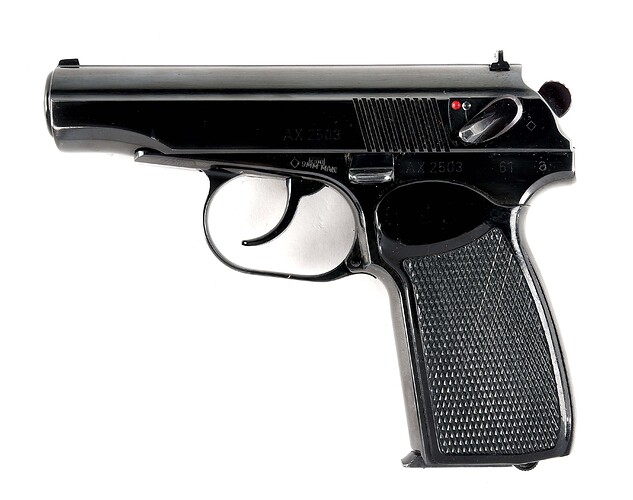 I had one, lost it in a divorce but it’s a great shooting gun and like stated, really accurate.

Never had the opportunity to handle/shoot one, I’d like to though.

Ouch! I found out their value has gone way up when I started looking around online for another one.

I had a toy gun modeled after that as a kid. Hand me down type, didn’t even have an orange tip.

I wouldn’t want to own one privately. Such Soviet pistols are not made to last. Instead of being designed to be maintained and last a long while like Western weapons, they’re meant to last long enough to fire a certain number of rounds and then be disposed of.

The Soviets made their aircraft guns the same way. It’s why the ShVAK had such an awful service life. They found that most pilots didn’t last long enough to fire more than a hundred or two hundred rounds before being shot down so there was no point in making the cannons last much longer than that. If any did last that long they could be ripped out and replaced by a new one rather than repaired.

That’s why I see so many AKs out on the curb on trash days!

It’s a 60 year old gun that looks and works as well as it did when new. LOL

Not too many of them were imported, comparatively speaking, that are made in Russia guns. Most of them are Bulgarian, Romanian, etc.

I’ve used one nanny times I like them. The ammo is pretty common and if you hit’em in the head they usually drop pretty quick.

I have a nice Norinco Type-59. Oustanding firearm!