Make a case for Chad Mendes over Frankie

Make a case for Chad Mendes that will trump-

UFC's all time Fight of the Night Award Winner, tied with Diego Sanchez

8 Fight of the Night awards

3 Championship fights which he was awarded Fight of the Night, 1 of those was against Aldo.

Jose Aldo-Mendes got knocked out first meeting, Frankie had Fight of the Night in a fight that could've been a draw

McGregor and him respect each other.

McGregor and Mendes have exchanged banter before. 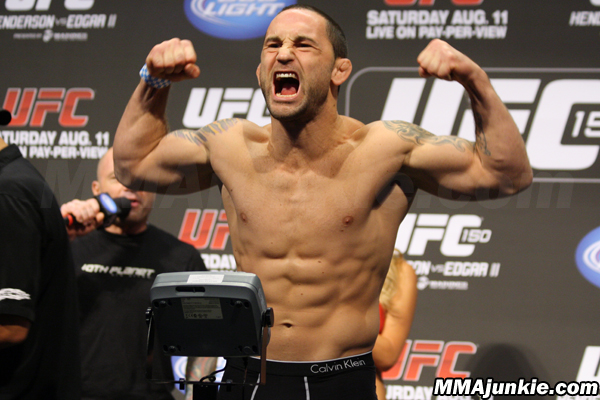 the islander - McGregor and him respect each other.

McGregor and Mendes have exchanged banter before.

This is it. Mendes fight is easier to market.

He's ranked above Edgar in the meaningless UFC Rankings. That's the only case Zuffa needs.

I find Edgar fights boring, but Mendez fights are not usually.

And, Conor will have a greater height advantage over Mendez.

Another reason why Frankie should have gotten the call over Mendes.

Because Frankie would beat Conor and I don't want that to happen.

I could see the argument being that Mendes has been beating high-level featherweights more emphatically than Edgar.

Mendes' best win at 145 is a first round KO of Ricardo Lamas, who also holds a finish over Cub.

Either one would be an almost equally good replacement. Pretending one is leaps and bounds better than the other is an exercise in silliness

I've never wanted a four mAn tournament as much as between these 4. So close

"Should" is a non-business friendly term, bro. ;)

Because Frankie would beat Conor and I don't want that to happen.

chad or frankie beat connor. period. I like both guys against connor.

I think McGregor knocks Chad out using his height and length to pick his shots, Frankie is hard as a coffin nail with more heart than any other fighter in the sport but is also more likely to fight smart and use his wrestling IMO.

Edgar is the toughest challenge by far, he's used to fighting larger opponents even at 55.

Because mendes is the better match up.


If mendes and Frankie ever fight, I'll put my money on mendes.

Mended is a destroyer and is much more exciting

Thacommish - He has the physique of a street shark

Used to watch it regularly before elementary school :)

Edgar deserves the shot a little more, but both are acceptable subs.

I definitely thinks Frankie deserves this shot over Mendes. People saying that Mendes is a better match up in Conor's favor is not wrong but also somewhat stupid. I don't think either guy is a good matchup for Conor. Both Frankie and Mendes have the wrestling advantage. I think both have the speed advantage too. Frankie has the better footwork but Mendes is the more powerful. Honestly as far as skill and attributes they are both really close but Frankie has more credentials and has been on a dominating roll. He deserves the shot. The UFC's back up choice with Mendes doesn't make sense imo but maybe they have a bigger plan in motion who knows