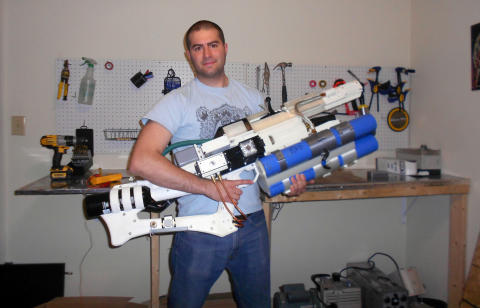 "If you think the image above looks frightening, you're right. The crazy contraption pictured in the image is the first portable railgun, a futuristic projectile launcher associated most commonly with the military or NASA. The man in the image above isn't in the military, and he's not a NASA engineer. Instead, he's a civilian who used some engineering smarts, some widely available parts and a 3D printer to create a functioning weapon that can fire graphite, aluminum, tungsten and even plasma projectiles at speeds of more than 560 mph.

And then there's the best part: There are videos of this homemade railgun in action.

Little is known about Imgur user "NSA_Listbot" beyond the fact that he's just short of being a wizard with AutoCAD and a 3D printer. The man took to Imgur over the weekend to share what may very well be one of the most amazing and terrifying DIY projects that has even been attempted. And he didn't just attempt it, he built it.

Using a combination of 3D printing and widely available components, the man built a functioning handheld railgun that houses six capacitors and delivers more than 3,000 kilojoules of energy per shot. What does it shoot, you might be wondering? So far he has tested the gun using metal rods made of graphite, aluminum and copper-coated tungsten, like the ones pictured below.
It can also fire carbon projectiles and teflon/plasma rods. That's right, this guy built a plasma gun.

The portable device works just like a full-size railgun, using electromagnetic technology to fire projectiles. But it's important to note that this portable railgun isn't quite as lethal as a military-grade railgun. While 560 mph projectiles can certainly do some damage, a military railgun can accelerate a projectile to speeds exceeding 13,000 mph in just 0.2 seconds.

Build a spud him they said....

Dude needs to do a kickstarter for version 2.0.

Hope he has insurance on his front door.... Cuz the ATF usually doesn't knock.

Well... I for one am impressed.
And also now have a strong want, no need, for a 3d printer

Cumbersome, dangerous and less powerful than a crossbow, no thanks.