Man Busted Going Down on Woman At Church Wedding

Man Busted Going Down on Woman on Church Lawn During Wedding 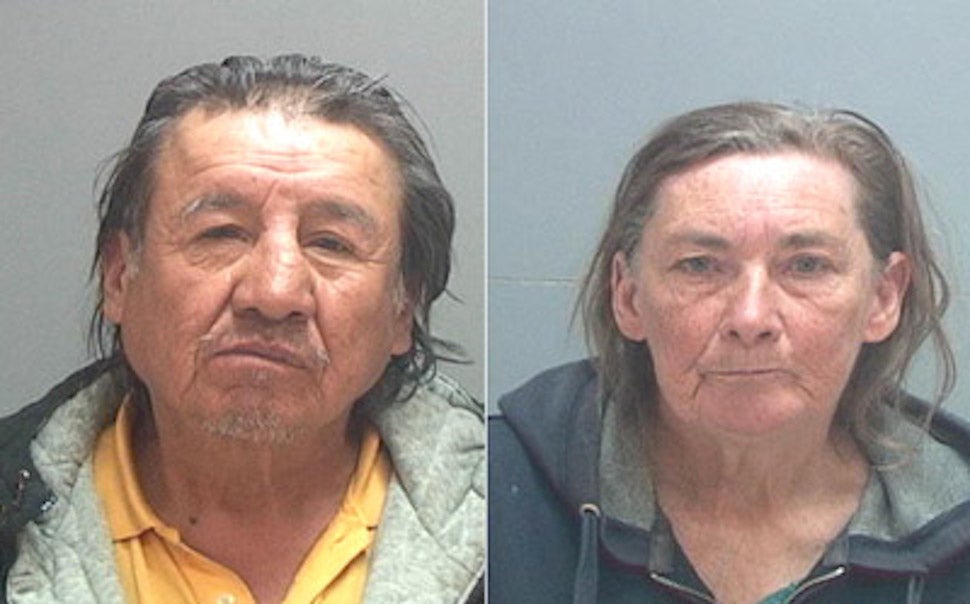 As a couple was getting married Saturday in a Catholic church in Salt Lake City, a second couple was allegedly busy having sex on the church's lawn. Specifically, police say they caught the man with "his tongue and finger inside of [the woman's] vagina."

When a wedding goer spotted Sandra Kruser and Wilson Benally mid-oral sex, the guest was so distraught she "ran into the road to stop" a passing police officer. Officer Rich Stone pulled over and walked to the churn lawn, where he approached the couple.

"I walked over to the couple and I physically saw the sex act," Stone reported, adding that Benally "had his tongue and finger inside of Ms. Krusen's vagina."

Stone told the couple to stop but they refused. Eventually, Stone had to pull them apart.

At least four children from the wedding party spotted the sex act, according to Stone's report.

Kruser and Benally were arrested for gross lewdness and public intoxication; Benally was also charged with criminal trespass. Both are being held on bond.

Thanks for saving me some cash on food, I dont think Ill be hungry EVER AGAIN...

Crashdt - Thanks for saving me some cash on food, I dont think Ill be hungry EVER AGAIN...

They should be happy. Having a hobo eating another hobos pussy on the front lawn of your wedding is an ancient sign of good fortune.

Ham and Egger - They should be happy. Having a hobo eating another hobos pussy on the front lawn of your wedding is an ancient sign of good fortune.

Wilson is DEFINITELY an OG'er!

Appetitie gone for the day!

fuck me did that cop need to get that descriptive?  just saying he witnessed a sex act is plenty there Barn

which one of you was it?

I wonder if there will be a dead spot of grass in the church's lawn for the next several years.

Tongue AND finger?!
Congratulations to the newlyweds. Their first child will be a masculine child.

john76 - man... was all like, cool!
clicked thread to see pics
ruined day

Looks like Sandra Kruser is still accepting rent payment in forms other than cash, check, or charge.

lol, cop told him to stop... but he ain't stoppin.

Well, Jesus...can you blame him?  I mean, I've got my fair share of self control but...

I always read stories here about crazy ass people and how they do all kinds of wild shit. Well Op has given us the "Godfather of no fucks given," Mr. Wilson Benally. It must have been the bath salts.