My whole life I grew up having corned beef hash for breakfast. Today I was watching the Price is Right and they had Roast Beef hash on one of the games on the show. WHAT??

I have never in my life seen Roast Beef Hash. Never even knew it was a thing. Is this a Mandela Effect? How many if you remember this product? 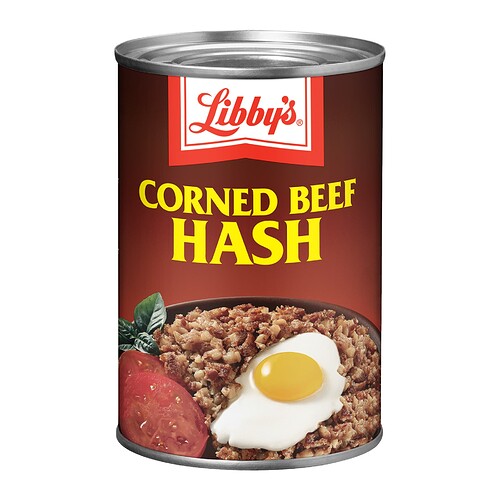 I have cans of both in my pantry.

Toast, eggs, and hash is my Sunday breakfast

2 different products. One is corned beef hash, the other is roast beef hash.

Mandela effect would be if we all called it corned beef hash but it was really roast beef hash all along.

Which one tastes better?

I used to fry it real good right before the point of it becoming crunchy. Then I would make a sanwich out of it with ketchup.

I couldn’t tell you. I had some that my grandma made when I was kid but I’ve never had either of those products. It probably taste like it looks.

Funny, I went to the grocery store today and thought of this thread. I had some time so fuck it, went looking for the aisle with corned beef hash. Found it, and just to the left of the corned beef hash, what do I see? Lo and behold, ROAST BEEF HASH. Same can and everything as the image above. I didn’t even know this shit existed before today.

Same can and everything as the image above. I didn’t even know this shit existed before today.

When the hell did this shit come out? I have been buying corned beef hash for 20 years and never saw the roast beef version.

It’s like buying Chili Beans and finding out there is a version of Chili Beans called Chili Con Blarney which has bits of the Blarney Stone in it.

is that mandela effect!?

What part of Minnesota are you from?

lol nowhere close. but they’re doing it right if they like smoked trout hash!