Marquardt Did NOT Fail Drug Test 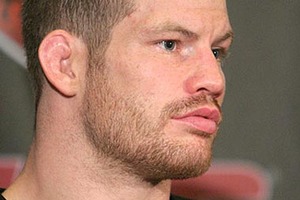 Nate Marquardt Mania continues, as a bevy of questions remain regarding the unusual circumstances surrounding "The Great's" suspension and subsequent public firing.

But we can officially rule out one extremely significant question: Marquardt did not fail a drug test.

Before we get to that, let's first lay out the sequence of events.

Marquardt was apparently made aware of the fact that there was an issue about six weeks before his scheduled fight against Rick Story at UFC on Versus 4 on June 26.

He was given that time to clear up whatever issue it is that he's having so he could compete on the card. When he failed to meet these requirements, whatever they may be, he was suspended indefinitely by the Pennsylvania Athletic Commission.

This pissed off UFC President Dana White beyond measure, as he wasted very little time releasing a video stating Marquardt is no longer welcome in the UFC.

He later went on the UFC on Versus 4 pre-fight show to say that while he couldn't divulge any details due to laws in Pennsylvania, the very fact that he went to the measure he did show exactly how serious this issue is.

He also told Nate to "man up" and let the world know exactly what's going on, something Marquardt is scheduled to do tomorrow (June 28) afternoon.

We now know that he will not be disclosing a failed drug test, though, thanks to an MMAFighting.com report that states the following:

According to the commission's website, while in the course of applying for a license, a professional fighter must provide a negative HIV, Hepatits C and Hepatitis B surface antigen exam. They must also provide the results of an annual medical exam. That exam is wide-ranging and covers potential issues related to vision, lungs, heart rate, the nervous system, coordination and more that could disqualify a fighter from competition. In addition, there is language in the regulations that offers the commission the latitude to request other exams. The stated medical requirements are similar to those of other states, including Nevada and New Jersey.

All of the test aforementioned results are considered the fighter's private medical information and kept confidential under federal HIPAA laws. Federal or Pennsylvania state law does not, however, prohibit disclosure of a positive drug test result, nor the type of drug which led to a confirmed positive test.

Sirb confirmed that if Marquardt had failed a drug test, the commission would have released those findings.

Now that we've ruled out drugs, anyone care to guess what the problem actually is?

Again, Marquardt is scheduled to clear everything up himself tomorrow when he appears on the MMA Hour. We'll be sure to bring you up-to-the-minute updates as he releases the information everyone is so badly waiting for.

i think this as well. if dana is treating him like this and it turns out that it's hiv i will never buy another pay per view again.

i hope he was just lazy and didn't have the paper work in time.

he has the bad AIDS?

How could someone "clear up" HIV in 6 weeks in order to compete?

You can clear up the bad AIDS in 6 weeks easy. It's about eating clean and time in a sauna.

First of all for those that are claiming it is some sort of STD, or the hep, HIV, or anything like that I can tell you that I am 99.9% positive this is not the issue. Nate has two children, one of which he just had not more than a year ago. If there was anyone in MMA who deserved the fans to wait and see before passing judgement it is Nate Marquardt. I hope that it is nothing serious or life threatening, and yes if he has some sort of serious life threatening disease and Dana is treating him like this then I think that will cast a very black shadow over the UFC.

I also don't understand how someone who is APPLYING for a license is put on suspension. There's no license to suspend.

^^^totally agree with that; they just denied his application.

Was Marquardt suspended after his last fight? In his defense, this could be something as simple as him not getting a letter from his doctor that stated he was clear to compete in combat sports again after the suspension from his last bout.  It doesn't always have to be about PED's.

If the commission didn't have that on file at the weigh in's and neither Marquardt or his team could produce a copy or have a copy faxed to them in time, then the commission would not let him weigh in.

since we are all speculating...

Im saying he tried to pull the sonnen.(which when you ask the President of USADA-he says is the oldest trick in the book) He had high levels of Testosterone, and had time to get his shit together, and didn't. So he didn't have to take a drug test(maybe refused), but he did have to have blood work done before getting to PA

Frills - he has the bad AIDS?

no no, it's a very mild form, should be fully recovered in 6-8 weeks

Blood issue he covered up. That is why Dana so pissed.

10ers gonna 10. nate is a former middleweight king of pancrase...but that was eleven years ago, and 10 years before you signed up here and hadn't heard of MMA at all.

Don't get me wrong, I agree with you that dude is just trying to be funny and as a result just looks like a dick.

But why do people on every site assume the day someone joins a forum is the day they started watching mma and base a persons knowledge of the sport on their post count?

What about herpes? Seriously. Couldn't that be something he could have cleared up enough so it wouldnt be an issue in the fight?

Sounds embarrassing whatever it is. And something that was known previously, he could have taken care of, and they didnt know till right before the fight.

I could see Dana being disgusted with him for having HIV and still trying to fight. The potential to give somebody else the HIV when they think they are safe from it is fucked up. If thats the case i'm also disgusted with him.