No, it was an incident with a clothing company KTFO. They gave him a bad check after he wore their shirt walking out to a fight and he came on here complaining. “NSF” became like this rallying cry and then the fan club started. Before that mayhem only had regional appeal.

Sad news indeed.
Maybe @Adam_Hunter will shed some light into it on the next MmaRoasted podcast…

Is that 3 strikes now?

How the fuck is bail 1.3 MILLION DOLLARS??

MURDERERS get bail less then that

Never liked him as a fighter and I always thought he came off like an obnoxious douche who tried way too hard to get noticed. I hope he gets real prison time for this latest stunt. The guy is dangerous.

Suge is representative of everyone?

He’s had multiple convictions and has assaulted women multiple times. Fuck him.

In August 2011, Miller was arrested in Chatham County, North Carolina and was charged with simple assault and false imprisonment after allegedly assaulting his sister at a house party.[25]

In August 2012, Miller was arrested for trespassing after allegedly being found sleeping naked in a church. The charge was later dropped.[26]

Miller was arrested on charges of domestic battery on August 11, 2013, and was released on bail the following day.[27]

On August 22, 2013, Miller was once again arrested for domestic battery.[28] In court on August 26, the two charges were combined into one case with two felony counts of “corporal injury of spouse.” Miller pleaded not guilty and his bail was reset at $100,000.[29]

On October 9, 2013, Miller was taken into custody, and was booked in the early hours of October 10 for a misdemeanor contempt of court charge for violating a no-contact restraining order by sending a Snapchat message.[30]

Miller was arrested on a felony domestic violence warrant on October 9, 2014, after a five-hour-long standoff with a SWATteam outside his Orange County, California home. Miller gave live updates over the five hours via Twitter.[31]

On March 7, 2015, Miller was arrested outside of a bar in Laguna Beach, California, and was charged with simple misdemeanor battery and resisting arrest. Video footage from a bystander showed Miller outside the bar, shouting expletives and fighting with police officers.[32]

On February 7, 2016, Miller was arrested in Irvine, California and was charged with DUI.[34]

In March 2016, Miller was arrested in Mission Viejo, California, after an arrest warrant for Miller was served. He was charged with burglarizing and vandalizing a Lake Forest, California tattoo shop with graffiti two months prior.[35]

On July 11, 2016, Miller was arrested by Costa Mesa, California police for injuring a security guard and spitting on a police officer at the Saddle Ranch Chop House restaurant. No charges were filed.[36]

In November 2017, Miller was convicted of felony domestic battery after pleading guilty. He was sentenced to serve three years’ probation with a suspended four-year prison sentence, meaning a probation violation could see Miller face up to four years in a California state prison.[37]

On October 23, 2018, Miller was again arrested on charges of felony vandalism in Orange County after allegedly destroying property at his girlfriend’s La Habra, California home. The girlfriend alleges that during an argument, Miller became angry and he smashed a large marble table, punched holes in the walls, tore down doors in the home, and derailed the home’s garage door. He was arrested and held without bail in the Orange County detention center and later pleaded not guilty. The felony vandalism charge itself carried a maximum penalty of eight months in jail, but between this particular incident, prior convictions, and a probation violation, Miller faced up to 23 years in a California state prison.[38][39] On July 19, 2019, it was reported that Miller had accepted a plea deal in the felony vandalism case, and he was sentenced to serve one year in jail with time served being credited.[40] He was released from jail in September 2019.[41]

On August 26, 2020, it was revealed that Miller was arrested on August 21 in California once again and was charged with first-degree burglary and grand theft auto, two felonies. He was booked into the Orange County jail on a no bond hold.[42][43] On May 11, 2021, Miller accepted a plea deal in which he pleaded guilty to the vandalism charge and had the grand theft auto charge thrown out. Miller was sentenced to serve 364 days in jail and two years of probation upon release.[44][45]

On September 10, 2021, he was arrested on felony domestic violence charges in Los Angeles.[46]

No but I was thinking both him and Miller have had multiple jail terms maybe it increases after a certain amount, hence why I mentioned if it was Jason’s 3rd time

Maybe he can get a room with D Quinn…

It’s a joke but I just hope he can get some help. But I don’t know if he can get it together or not unfortunately
Prayer’s for u brother

Wow.
I cant believe how much hes gotten away with , and only done 1 year

Also, its too bad, seeing this doesnt make me happy

He’ll run to Mexico at this point lol as he’s finally out of chances and is going to do hard time.

Now that’s some show right there

He and Rogan were tight for a while. I think that endeared him to the UG 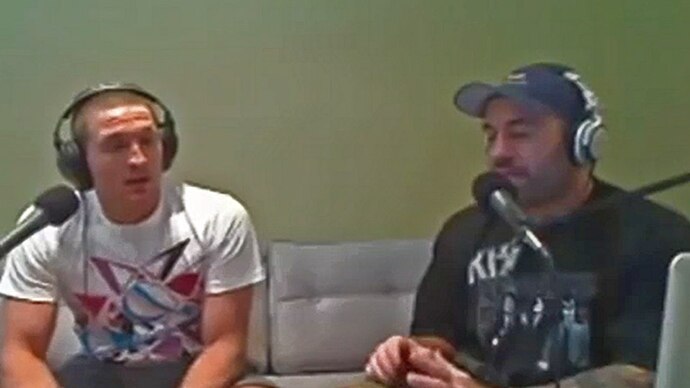 Coleman has been straight for about 120 days now.He didn’t look that bad tonight on BKFC he wasn’t limping either.

That’s good to hear. I thought for some reason that Mark was down in Mexico with baroni

Hell yeah he is, cracka