All the Mexicans that I know supported Trump. They laughed at the bullshit of trannys, race wars, etc of the left. The Dems may win/buy a few elections with illegal aliens,but as they get older and have families, they tend to support conservative views.

Every demographic has a TON of conservative-leaning people. That’s why the Left HAS to push identity politics and call the other side racist at every turn. That is ALL they have.

Every demographic has a TON of conservative-leaning people. That’s why the Left HAS to push identity politics and call the other side racist at every turn. That is ALL they have.

That and mail in fraud

McAllen is where that Mexican dude stood his ground with a chainsaw during riot season isn’t it?

Now, if we can only get them to stop creating gangs, stealing and tagging all over the place…

This is huge in Cali Mexicans, not sure about TX Mexicans.

As soon as the majority of them start voting republican, democrats will become the party of building walls and securing the border. FACT.

I have worked with many legal immigrants from all around the world.

I agree it is an accurate assessment they hate cheaters.

Illegals make their life harder. People assume they are illegal.

Hardest working people I have ever met were legal immigrants, 100 percent.

You just made liberal heads explode with that assessment.

They can’t distinguish between legal and illegal immigration.

In their minds, if you’re against illegal immigration, you hate all immigrants.

Texas latinos are the most conservative in the country. It’s one of the reasons the Texas GOP continues running the state. Definitely different than California Mexicans speaking in broad terms.

The problem is, Latinos as a whole still vote Democrat. As Texas heads towards an outright Latino majority this is going to be a major problem.

If more Texas Latinos don’t flip conservative then Texas is going to fall, it is a mathematical certainty.

The Dems continue running on open borders and free handouts/welfare and that appeals to a lot of the destitute uneducated migrants flowing over the border. It has created generational democrat voters over decades.

We do know as a fact in Texas, the Latinos that actually assimilate as American vote majority Republican. The ones that speak English at home and don’t feel any allegiance to another country. That was per a poll here in Texas.

Poll: Hispanics in Texas more likely to favor GOP than in rest of nation

Hispanic and Anglo residents in Texas identify with the Republican Party far more than the national average, according to new polling data released Friday that calls into question how soon demographic changes in Texas could benefit Democrats seeking statewide office.

Latinos who live in predominantly Anglo neighborhoods tend to vote like their neighbors. Wealthier Hispanics are more likely to vote Republican.

Texas Republicans have shown the ability to win significant shares of the state’s Latino electorate in the past.

“I’m cautious to equate the demographic shift in Texas with it automatically turning blue,” DeFrancesco Soto said. “I mean,that assumes Republicans stay as conservative as they are. Remember George W. Bush’s second gubernatorial election – he got 49 percent of the Latino vote.” 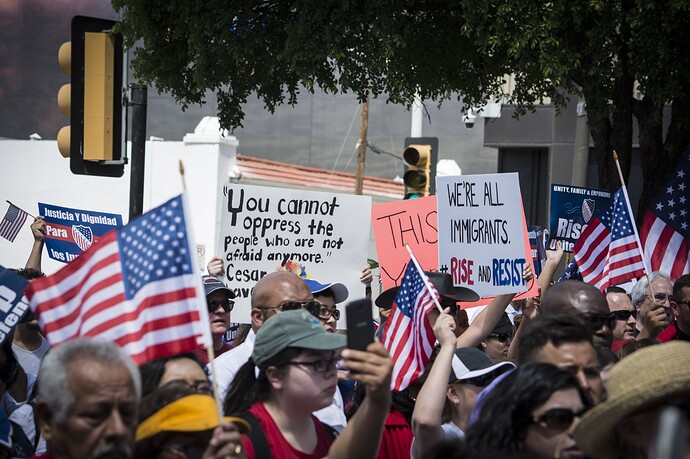 Latinos Will Outnumber Whites in Texas by 2022. What Does That Mean for State...

It's only a matter of time, according to new data from the U.S. Census Bureau, before Latinos become Texas' biggest ethnic group. From 2010-17, the state's total Latino population increased by about 1.4 million, from 9.7 million to 11.1 million. Over...

Democrats have a Latino problem. Can they fix it in time?

Given Trump's rhetoric about immigrants and his border policies, you'd think Hispanics would be leading a march to the polls. They aren't.

It was sad but also funny when the ones who voted for trump got deported.

My mother in law is in McAllen. I love it.

White Leftists don’t understand that a LOT of Mexican & Latinos all over the Southwest work in semi-skilled trades that are directly effected by a mass influx of illegals.

If you are a laborer and suddenly there are 500 more guys in your area of town undercutting your prices to do drywall, haul trash, trim trees or whatever that has an immediate effect on you & your family.

White Leftist don’t understand that there are many working-class Latinos who have been here a LONG time and have much to lose.