After his latest loss this past weekend, Mitrione is parting ways with Bellator. What do you guys think is next? I actually think UFC, given the shallowness of the heavyweight division, might possibly consider taking a flier on him. I’m sure they’d love to bring in a former Bellator champion to get fooled by some up and comer, but at the same time, Mitrione can throw some bombs if given the right dance partner.

Any chance he goes there? How about PFL? Hard to believe, but I just read that he’s 43. Retire?

Well, that was fast.

I don think that Mitrione was a Bellator champion and the UFC doesnt really bring back their washouts.

I don think that Mitrione was a Bellator champion and the UFC doesnt really bring back their washouts.

You’re correct. I thought for some reason he held their title once.

Look forward to see him in BKFC

I wonder if Chael will still call him the best heavyweight in modern mma?

If the UFC cuts Greg Hardy, this would be a decent match up in a smaller org

Battle of the former football players

I’ll never forget when Mitrione said he did not think LHW’s moving up to HW was good for “the evolution” of MMA. He also said his loss to Bader was not a “real” HW fight despite the fact a 230 lb Bader kicked his ass. Hilarious stuff. 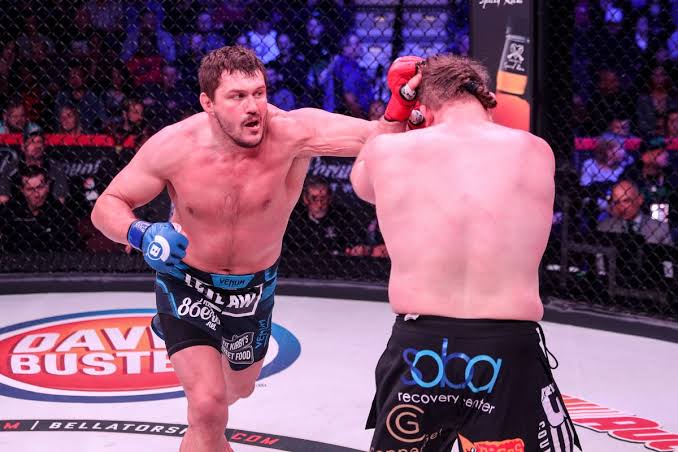 “I think about it, right? I’m happy for those individuals,” Mitrione told host Luke Thomas on a recent edition of The MMA Hour. “But I think that classes are classes, and I think that heavyweights are an animal all amongst themselves. So, I think there can be interdivisional fights, and I think it’s great for the fodder for fantasy stuff. But I don’t think it’s great for that evolution of the sport. I don’t think it is. I think it muddies the waters and I think it negates — for example, if I didn’t lose to Bader, pretty good chance I’ll have a title around my waist for Bellator.”

Mitrione believes if he would have had the Bellator heavyweight strap wrapped around his waist hadn’t he fought Bader as he was 4-0 in the Bellator’s heavyweight division.