The New York Times profiled Tim Burke, the man responsible for creating the majority of sports gifs that get passed around on the internet. He works 16 hours a day sitting at his workstation staring at 10 monitors, all playing sports. 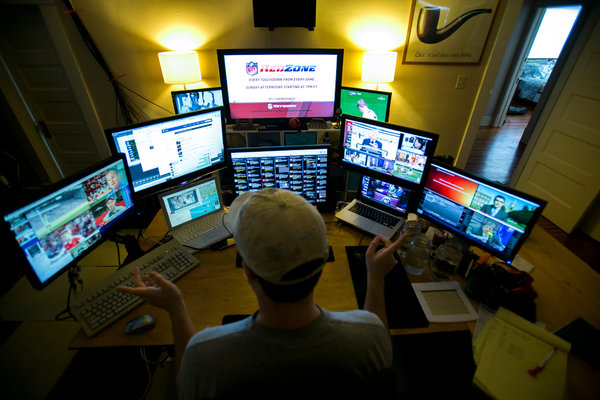 ST. PETERSBURG, Fla. — At 2:44 p.m. on a recent Sunday, Tim Burke took a moment from monitoring numerous N.F.L. games for the sports Web site Deadspin to post something that had nothing to do with football: a smidgen of a clip from an English rugby match he also happened to be following.

He stitched together still-frame images captured from the broadcast into a short, continuous loop that showed a player built like a cement mixer strong-arming an opponent to the ground by the unfortunate man’s throat. The GIF, or Graphics Interchange Format, showed a vivid moment, the kind that has become standard currency for online sports journalism. That Burke had time to produce it at all reflects the vacuum-cleaner-like way he approaches his job.

The sports editor at the Web site Buzzfeed, Ben Mathis-Lilley, could only observe in awe.

“It’s hard enough to watch one or two games at once and to actually get the stuff people think is great,” he said. “It’s hard enough to monitor all the American sports. But Tim is so good at coming up with stuff from all around the world, and from sports like minor league hockey, that no one else is watching.”

Burke, 35, is known among sports journalists for his ability to capture the moment — whether as a still, a video clip or in his favored format, a GIF — better, faster, more frequently and from more sports events than just about anyone. How he does it is a matter of wonder.

He works from home here, in what his colleagues call the “Burke-puter,” for its seamless integration of man and machine. It is less an office than an organism: a flashing, beeping, glowing, thrumming assault of screens, wires, remotes, tuners, phones, receivers, computers and general electronic effluvia wrapped around a person (“the monitor situation up there is insane,” said Burke’s wife, Lynn Hurtak.). Burke sits here alone in the dark day after day, for about 100 hours a week, watching dozens of sports events simultaneously.

“My job is to know at all times what’s happening in every game,” Burke said in a recent interview in the Burke-puter.

Some of his 10 functioning monitors are programmed to split into eight or more miniscreens, and he can record from 28 sources at once. This time of year, he is watching a lot of football. On Oct. 6, he watched the New Orleans Saints versus the Chicago Bears; the Philadelphia Eagles versus the New York Giants; the New England Patriots versus the Cincinnati Bengals; the Baltimore Ravens versus the Miami Dolphins — a dozen N.F.L. games in all — as well as two Major League Baseball games, four Premier League soccer matches and a ragtag assortment of other events, starting at 10 a.m. and finishing at 2 a.m. the next day.

“I am not able to do many other things,” Burke said of his life in general.

Ghost of Retard looks out of shape in that pic