Michael Sam was cut by the Rams 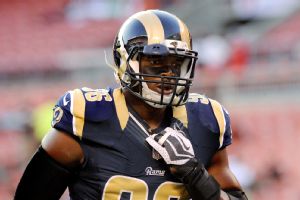 Westbrooks is one of nine defensive linemen to land a roster spot.

Sam officially hit waivers Saturday at 4 p.m. ET when all NFL teams had to trim their rosters down to the league-mandated 53 players. From there, the other 31 teams will have 24 hours to put in a claim for Sam.

According to one league source, the Rams would like to bring Sam back to their 10-man practice squad.

The Rams spent a seventh-round draft pick, No. 249 overall, on Sam in May's draft. In arriving in St. Louis, Sam joined a team about two hours from the Missouri campus where he went to school, but also one loaded with defensive line talent. Sam put together a solid preseason performance, coming up with 11 tackles and three sacks. In Thursday night's preseason finale against Miami, Sam finished his preseason work with a team-high six tackles.

After the game, coach Jeff Fisher offered an endorsement of Sam's ability.

"I believe he can play in this league," Fisher said.

Teams can begin signing players waived in the final round of cuts after the waiver period ends Sunday.

someone will pick him up he did well. The undrafted rookie just was better

Hate to say it, but that fairy did well in the preseason. He'll get picked up...

cruedi - someone will pick him up he did well. The undrafted rookie just was better

He did well against mostly 3rd stringers trying to make the teams... Face it, the dude is too small and his combine numbers sucked. He may still get picked up but he isn't going to have a career.

One again this is what happens when political correctness meets the real world...

About Champ Bailey getting released or this 7th rounder?

amadeus - He did well against mostly 3rd stringers trying to make the teams... Face it, the dude is too small and his combine numbers sucked. He may still get picked up but he isn't going to have a career.

One again this is what happens when political correctness meets the real world...

I love how some have this as breaking news.
Big fucking shit, a late round draft pick was cut.

Wonder if he will go on with his reality show now?

There won't be a shitstorm. He played well enough to get a job either on the PS or on another team.

No shitstorm is coming.  The Rams might have the deepest D-line in the league.  Sam had a great preseason, and was battling for the fucking 9th spot on the Rams D-line.  The Rams want to sign him to the practice squad, but he will undoubtedly be snapped up by a team lacking the Rams depth.

He is exactly who people said he was before the draft:  A physical tweener who will make a good situational pass-rusher and special teams player.  He'll see a lot of 3rd-and-long action for someone, and develop from there.  It was surprising to see what a good tackler he was when not pressuring the quarterback.  Not a big hitter, but a fundamentally solid tackler, albeit without much range in run support.

He'll be fine.  It's not a scandal, it's not a gay-anything, it's football.  Cut the shit, fellas.

If I were an NFL GM, I would love to pick him up. Shows he has what it takes to stick it to opposing offenses. Put him with the right guys, and he can give you what you need up front and backing it up.

I THINK I see what you did there.

The whole St. Louis organization, actually the entire state of Missouri is nothing but bigots.

Dude, shitstorm? Really? You really think that is appropro?

Doesn't come as a surprise to anyone that even knows a little bit about football.

Of the billion espn.com comments already I laughed at

If I had a son, he would have been cut by the Rams.