Michael Todd's wife looked like she got caught laughing

LMAO she looks right at the camera with a guilty look How many people are laughing backstage literally seconds after they got shut out, ESPECIALLY WITH AN UNFAIR TABLE

Some of you need to wake the hell up lol

Are you suggesting MT took a dive for A - Rab money?

I wasn’t even thinking about it but his demeanor for arm wrestling was WAY off.

He seemed far too happy for Devon far too early.
You don’t join in on the touchdown dance when the other team scores at the Superbowl.

Damn so now there are works in the arm wrestling world? That’s a very good way to kill the sport before it ever gets popular

Even Michael was smiling.

They talked about this on Michael’s channel. Win lose or draw, they were going on a trip around the country after this match, Michael and Rebecca’s plans weren’t riding on the outcome of this match like before. Add to the fact that Devon absolutely shocked them with his dominance.

Not a chance this was a work, Devon just got massive and didn’t overtrain for once, where as Michael got leaner, too lean. Devon controlled Michael’s hand and wrist, leaving Michael with literally no path to victory. Devon was able to power through the regular legal King’s move easier than Brzenk did, and even if the “Desperation move” (a King’s move where the opponent’s humerus drops below the elbow pad) was allowed, it wouldn’t have worked, Devon could have just pressed through it. 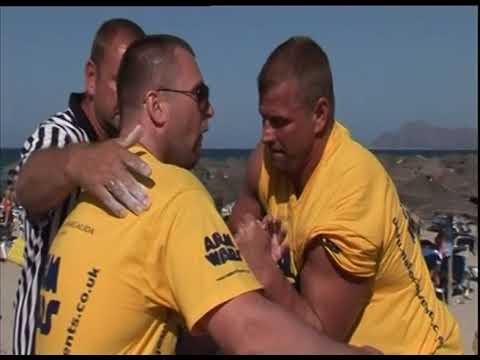 ^ Watch that match before you question that dude’s will to win.

He just had nothing for Devon, he said he trained his ass off and was the best shape of his life, I tend to believe him

Devon is also has arguably the best arm wrestling IQ of anyone. Time off to heal injuries and gain size and strength makes a scary dude, might not be enought to beat Levan but I’d love to see it

Is this a Ben Askren spin?

Devon has been out training in Dubai for a while now and doing lots of collabs with fitness influencers.
He’s a good guy.
Work or not I hope they were both paid generously

Shit’s way too abstract to hold my interest. I know there’s a bunch of strategy to it, but it’s so specialized. Snore

Zero entertainment value. One click below that slapfighting debacle