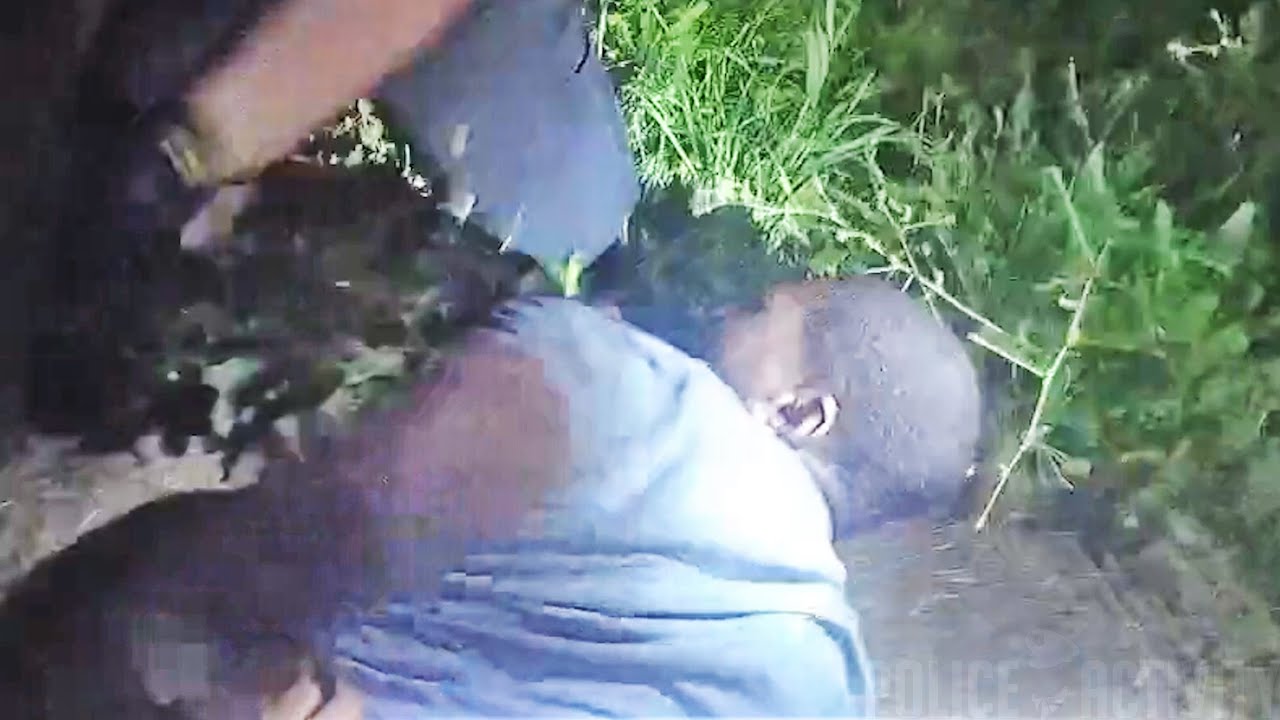 Milwaukee, Wisconsin — Newly released body camera footage shows a Milwaukee police officer shooting the wrong man during the pursuit of a suspect. The shooting, which stemmed from a police pursuit, happened in Sept. 8, 2019, near North 26th Street and West Auer Avenue. The body camera video was not released by the Milwaukee Police Department or by Tari Davis’ attorney; rather, by Davis himself – publishing it on his website. Officer Nikolas Zens was chasing a suspect who fled a traffic stop. Kevin Brown, the suspect officers were pursuing, had bailed from his vehicle and fled on foot toward Davis’ home. Courts documents state an officer thought Brown was reaching for a weapon. When the officer fired his gun, Davis was shot in the stomach. Zens was later fired by the Fire and Police Commission after they determined he violated department policy when he fired the single shot. Brown, the suspect police were pursuing, was charged and convicted in this case.

FYI, he was not some innocent bystander. The guy was specifically running to his house as they are soon to be related:

Two years after being shot by a police officer who was chasing after another man, Tari Davis is demanding more accountability from the City of Milwaukee.

Over the weekend, Davis published a 50-second body camera clip of his September 2019 encounter with police on a website he created. The clip shows the moment the fleeing suspect runs to Davis as he was standing by his backdoor.

The officer, who had been shouting for the suspect to stop and show his hands, runs up to the door where both men stood and fires one shot, hitting Davis in the stomach. Neither Davis nor the suspect were armed.

The officer, Nikolas Zens, who had one and a half years of experience at the time, was not charged by the Milwaukee County District Attorney’s Office. But he was fired by then-Chief Alfonso Morales shortly after the Fire and Police Commission issued a directive to release more information about the shooting.

Davis, 43, has since filed a federal civil rights lawsuit against the city, seeking compensation for the physical and mental harm he’s suffered since the shooting. He said the 50-second clip is all the footage the Police Department has released to him.

“I haven’t heard from the city since it happened, period,” Davis said in an interview with the Milwaukee Journal Sentinel. “No apology, no nothing.” 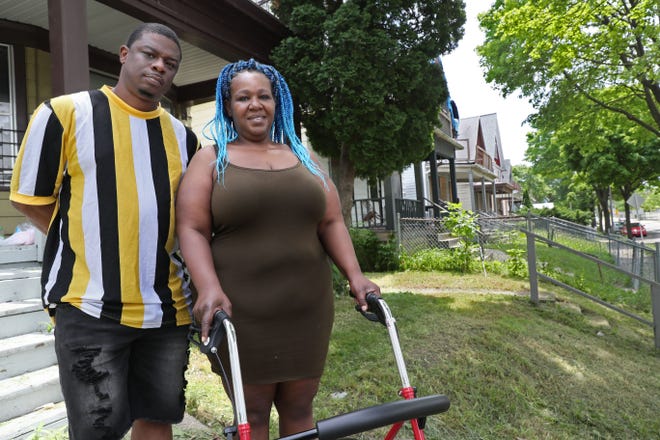 Around 1:30 a.m. on Sept. 8, 2019, Milwaukee police attempted to stop a car driven by Kevin Brown, now 24, who was seen speeding through a red light on the city’s north side, according to the criminal complaint.

Brown instead led police on a 14-mile car chase over 19 minutes. He drove without headlights on, ignored lights and stop signs at 24 intersections, reached speeds over 80 miles an hour and at one point rammed his vehicle into a squad car, the complaint said. Police also tried deflating his tires with stop sticks.

Police reported Brown appeared to be using his phone during the chase. Davis said at the time, he was watching a movie with his family when he received a “butt dial” from Brown and did not talk with him. But Davis could hear the chase unfolding outside and realized Brown was involved. The two had known each other for years, and Brown is engaged to Davis’ daughter.

Fuel your hometown passion and plug into the stories that define it.

Eventually, Brown ditched the vehicle and fled on foot in the Franklin Heights neighborhood on Milwaukee’s north side. Zens, who heard the chase unfold on dispatch radio and drove to the area, joined the pursuit at that point, jumping out of his squad car and following Brown from about 10 feet away as he ran through several yards, according to city documents.

Zens said he believed Brown was armed because he kept his arms in front of him and inside his shirt as he ran, documents said. Brown later told police he had been trying to put his phone in his pants pocket, according to the district attorney’s office.

The two rounded a corner when Zens came upon Brown and Davis standing outside Davis’ backdoor. Zens was about 5 or 10 feet away and saw Brown extend his arms outward from under his shirt, which he said made him think he was about to be shot, documents show.

Davis, who could hear the commotion from the chase, met Brown at the door, but the two didn’t have a chance to speak before Zens appeared and fired one round, hitting Davis’ stomach. In the video, Davis falls back into the home, while Brown is seen falling forward and getting cuffed by officers.

“I only got a chance to look at him before the shot rang,” Davis said.

Davis said he was shackled to the bed when he awoke in the hospital.

Davis said the incident upended his family’s life. His injury put him out of work for a year and he still struggles somewhat to move around. He said his family was traumatized by officers searching the home and placing two of his daughters, ages 19 and 14, in handcuffs.

Davis and his family were never charged in the incident. But he believes it played a factor in his family being evicted from the home in April 2020, during a ban on evictions from Gov. Tony Evers.

“We’ve been going from house to house up until this point, just now getting into a place in the last month or so,” Davis said. “My girlfriend at the time, she was in the shelter for a long period of time. I was staying with relatives. The kids were split up between me and relatives.”

Brown pleaded guilty to a felony charge of fleeing police and a misdemeanor count of bail jumping. He declined an interview request through Davis, who has repeatedly come to Brown’s defense for his actions.

He said Brown fled officers out of fear of being hurt by them and was trying to find help.

Milwaukee County District Attorney John Chisholm did not file charges against Zens. In a letter to then-Chief Morales in February 2020, Chisholm said there was no evidence to refute Zens’ perception of a threat.

He was placed on administrative duty following the incident but was not fired until more than 10 months later, after the Milwaukee Fire and Police Commission made an aggressive effort to force Morales into releasing more information about it.

The incident was not investigated by an outside agency because Davis’ injuries were not life-threatening, police said at the time.

The case was referenced in one of the many directives the commission issued to Morales in late July 2020. The directives, which eventually led to Morales’ legally flawed ouster as chief, called on him to audit the investigation, provide a public explanation of the incident and hand over investigative files to the commission within a week.

Ten days after receiving the directive, according to city documents, Morales fired Zens. A public explanation behind the incident was not given before Morales was ousted as chief on Aug. 6.

Hours before Morales’ ouster, the chairman of the commission at the time, Steven DeVougas, who later resigned amid an ethics scandal, released a statement saying Davis’ shooting was one of several incidents that drove a wedge between himself and Morales, along with Mayor Tom Barrett.

More: How a rape case exposed a tangled web of dysfunction in Milwaukee

Morales found that Zens violated the department’s rules in two ways. One, by not keeping enough distance between him and Brown and charging ahead after losing sight of Brown when he rounded a corner.

Morales found Zens’ decision created danger because he ran into an unknown situation and limited his options to respond.

In his appeal, Zens argued he had valid tactical reasons for the decisions he made. He said he was too close behind Brown for him to set up an ambush of some kind after rounding a corner and that slowing down might have allowed Brown to escape into an innocent person’s home.

He also said he faced an immediate threat when Brown extended his arms and had no time to isolate his target before defending himself and firing.

Nevertheless, Zens apologized for his actions during his appeal to the commission.

“I cannot express enough of my apologies to Mr. Davis and I hope he can forgive me,” he said.

Police reported Brown appeared to be using his phone during the chase. Davis said at the time, he was watching a movie with his family when he received a “butt dial” from Brown and did not talk with him. But Davis could hear the chase unfolding outside and realized Brown was involved. The two had known each other for years, and Brown is engaged to Davis’ daughter.

Brown pleaded guilty to a felony charge of fleeing police and a misdemeanor count of bail jumping. He declined an interview request through Davis, who has repeatedly come to Brown’s defense for his actions.

He said Brown fled officers out of fear of being hurt by them and was trying to find help.