Mini Khabib coming to smash everyone

Wasn’t sure if I should post this on the UG or OG. 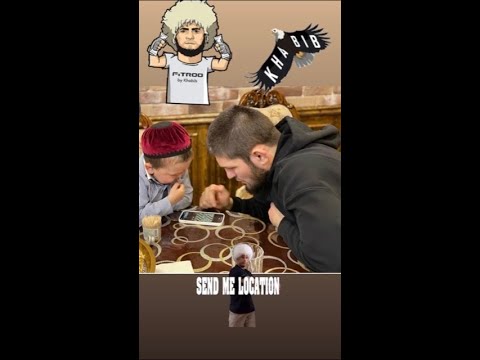 That kid weirds me out

That would make a lot of sense actually.

Lol WTF condition is that?

Meet Khasbulla Magomedov from Dagestan. At first glance - an ordinary little child. But … Hasbullah is already 18. Even the doctors could not determine the boy’s illness, so he spat on everything and just lives his own life. And it has become incredibly rich recently.

The first video that flew around the Internet and gave Hasbullah immense popularity is known for the phrase “Strawberry is the bomb, to be honest.” It is quite short, and on it an 18-year-old boy, who has the appearance of a child, is sweetly savoring a berry.

Now Youtube is replete with a variety of videos with Hasbik’s participation: he accompanies wedding cars on an ATV, then eats a burger with appetite, and he is jokingly asked if he is the bomb or Hasbik’s favorite strawberry is, then he appears as a consultant in a store and offers “bomb” products.

Hasbullah’s unchanging appearance is associated with a disease, the name of which he does not know, because, according to him, the doctors themselves did not understand this. He says that apart from external signs, the disease almost does not manifest itself in any way, except perhaps with fatigue, which inevitably arises after long walks.

Now have him fight Baba…

He is like a cross between the real life Dagestani Mini-Me and Dagestani Chucky!

How has touch not told us about him yet? They need to sign him for midget MMA fight on a big Fight Nights Global card or at least let him be the ref.

How has touch not told us about him yet

I only saw him once accidentally at Usman (Khabib cousin) wedding footage and thought he was just some kid. Had no idea about his condition until yesterday