MIR:"I Would Bet on Cain Against Any1 in HW Div"

Frank Mir: I would bet on Cain Velasquez against anyone in the heavyweight division 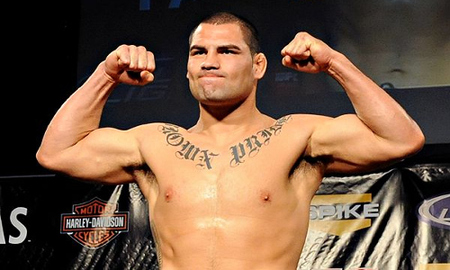 And that includes Junior dos Santos, who he's "not completely sold on" just yet.

Admittedly, that's without seeing "Cigano's" recent shellacking of Shane Carwin at the UFC 131 event this past June 11, 2011, in Vancouver, British Columbia, Canada.

Apparently, though, it wouldn't make much of a difference in his opinion.

Velasquez, despite having not even reached double digits in terms of career fights (9-0), is as well-rounded as they come. His combination of striking and wrestling will be tough for any 265-pounder to handle.

But that's not what truly makes him so deadly.

Not according to Mir, who says his biggest advantage is that he excels at the one aspect that is the absolute bane of the heavyweight division's entire existence.

"I'm still not completely sold on dos Santos. (He hasn't seen the UFC 131 fight between JDS/Carwin). I don't know how well-rounded he is. Velasquez right now, though, I think is a hard match-up for everybody," Mir told ESPN (via Fight Opinion). I think he posses the one tool that is every heavyweight's Achilles heel and that's his cardio. It's amazing that he has cardio on the same level as most Welterweights that are at the top of their cardio game. He's shown to be extremely well-rounded as far as hands, takedowns. He threw Brock Lesnar around like a rag doll, I couldn't believe it, I mean he out-struck him obviously but he picked him up and threw him down and I was blown away by that. Also, Brock with all that size and power couldn't even hold him down once he had taken him down. So, right now, I'm pretty much if you tell me Cain Velasquez and anybody to name on the other end of that roster, I would bet on Cain Velasquez."

Velasquez, perhaps the least imposing fighter in the entire division, may not have the impressive bulging muscles like many other heavyweight hitters, but he's just as effective.

And his smaller frame is much easier to get oxygen to.

Maybe it's just Mir lamenting the fact that his cardio has never quite been up to snuff, although he's improved drastically from his earlier days.

Or it could be that Cain, despite not possessing the biggest body of work, truly is the greatest heavyweight in the sport.

When he takes on dos Santos for the title later this year, Frank Mir's money will be on Velasquez. Who will you put your money on?

call me crazy, but I think Murrr would do ok against JDS and Cain, not sure he would win, but I bet he could make a fight of it... here lately (post Vera destruction), seems only big wrestlers give him fits.

cue comments on how cocky everyone thinks Mir is

Nice little read, and I agree with Frank.  Cain is a bad matchup for any HW right now (including Mir).  JDS is tough too...I am sold on him.  I kept thinking "let's just wait til someone puts him on his back", but it just doesn't happen.  At least not for long.  That's a big plus for someone with JDS' striking.

Cyril Jeff -  call me crazy, but I think Murrr would do ok against JDS and Cain, not sure he would win, but I bet he could make a fight of it...

Ihearyabuddy - ^ JDS would KO him quicker than shane did

cain would take him down and gnp him

I don't think so, Frank was doing just fine until Shane came with the Carwin Uppercuts of DOOM™

don't really see JDS getting him in that spot , if JDS were to beat Murrr, I suspect it would be at the end of his punches in the center of the cage...

I don't know why everyone is still doubting Junior's hands. He blew his load trying to finish Carwin in that first round. Once he starts to open up with his striking only Carwin and Nelson have survived the onslaught and they both took serious beatings. I think he would have Mir desperately shooting for take downs within the first 2-3 minutes.

I don't think there is a HW out there right now that can last a full 5 rounds with Cain the way he's fighting....the guy is straight nasty

I can see that all day!

I can see that all day!

The closest thing we have right now.

Mir is bang on the money with this one.

Yup Cain all day. He will finish JDS in the 2nd rd

I wouldnt bet against Cain against anyone right now.