Could this be the big one?

I think the important thing is that there is a serial gang rapist on the SCOTUS bench, right dems?

Could this be the big one?

I think opinions start dropping at 10.

I feel like if it would happen it would have been leaked prior. We shall see.

I feel like if it would happen it would have been leaked prior. We shall see.

I think Biden came out and said something about not rioting if RvW doesn’t go the way the leftists want it. Let me see if I can’t find that. 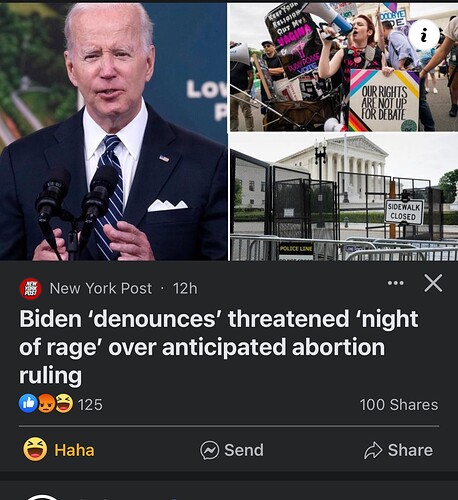 Of course they don’t want them to be terrorists. They only encourage it if it benefits them. Not when they are running a propaganda scam to try to convince Americans they aren’t living in a declining country because of them but because of the people not in power and not making terrible decisions.

The Supreme Court rules 8-1 that GOP lawmakers in North Carolina can intervene in litigation to defend a state voter-ID law. The NAACP is challenging the law, and the NC attorney general (a Democrat) is defending it. GOP legislators want to intervene anyway. SCOTUS says they can.

The Supreme Court sides with a man on Georgia’s death row in a case about what procedural mechanism prisoners must use to challenge the constitutionality of a state’s execution method. SCOTUS says prisoners are not limited to the federal habeas laws to bring such challenges.

Thanks for the updates!

If a police officer fails to give a suspect his Miranda warnings, and the gov’t uses the suspect’s un-Mirandized statements against him in court, can the suspect sue the officer for violating his Fifth Amendment right against self-incrimination? In a 6-3 ruling, SCOTUS says no.

We’ve been waiting since it was rumored to be coming out early last week. At this point we’ll get it when we get it, but I’m not holding my breath for it.

I also think it’ll be with the last batch they put out so they can drop it and then get everyone the fuck out of dodge before all chaos that will unfold around the Supreme Court, cities, and justices’ homes

The Supreme Court STRIKES DOWN a New York gun-control law that required people to show “proper cause” to get a license to carry a concealed handgun outside the home. The vote is 6-3. https://supremecourt.gov/opinions/21pdf/20-843_7j80.pdf