FBI Suspects De La Hoya-Mosley II fight was fixed, Raids Promoter Top Rank Offices
According to the New York Daily News, this on-going 20-month probe is investigating whether the rematch between Shane Mosley and Oscar De La Hoya was fixed along with other allegations involving Top Rank and their fighters. A law enforcement source close to the probe would not elaborate on the findings, saying only, "We have information that the De La Hoya fight was fixed."

FBI agents showed up at the Top Rank offices in Las Vegas armed with search warrants and seized undisclosed documents and other materials on Tuesday . Currently, Bob Arum, the president of Top Rank is out of the country on vacation

In all seriousness, this is crazy! No one thought that anything would come of De la Hoya's promise to "challenge" and "investigate" that decision!

BTW, I didn't think Oscar was totally robbed blind although I thought he probably won by a narrow margin. It wasn't like Holyfield vs. Lewis I or Whittaker vs. Chavez.

Where is this info from?

Okendo vs. Byrd was the worst decision in recent history.

There is no way Frez lost to chris, no way possible.

holy shit this is huge and terrible. Good in that it had to happen but bad because boxing is already so down and this makes it look even worse! Man Shane has been in the shits lately, first it was reported that his wife was cheating on him, then he is called to appear and answer questions regarding that "designer steriod" that they are busting everyone on and now this. Wow, I feel bad for Mosley, I am sure he didn't have anything to do with the fix and he's a good guy and a good fighter.

We will see how it goes, but boxing is only slightly more credible in the public's eyes right now than pro wrestling...

Good news for UFC, perhaps boxing fans who are fed up with the corruption in the sport will turn to the UFC.

this picture says it all. blue namer please

FYI the "fix" is that the scales might have been screwed with to allow Oscar to come in heavier than reported. And thus give him the advantage. 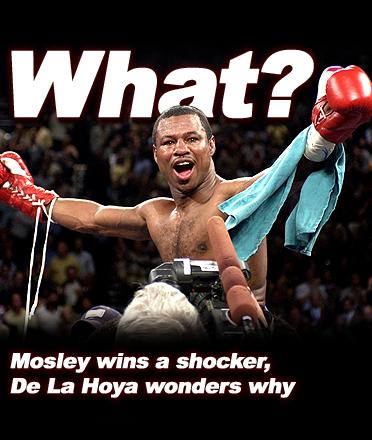 The information is correct. Depending on what the FBI can prove, this may prove to be the blackest eye on boxing this century.

my fav pic even saved on my hardrive.

shane you know you lost that fight buddy

I hope this investigation puts an end to BS boxing decisions.

jack its all over then net about 50 different websites. ya go to ESPN and get their view lol here go to maxboxing.com, fightnews.com, foxsports.com, boxingtime.com and many many more !!!!

A corruption probe of boxing is examining whether the disputed bout between Oscar De La Hoya and (Sugar) Shane Mosley was fixed, the Daily News has learned.
The investigation centers on allegations that Top Rank - one of the world's largest boxing promoters - and a number of its boxers were involved in schemes to throw fights.

Law enforcement sources told The News there also is evidence that scales may have been tampered with to allow boxers of different weight classes to fight each other, and that medical documents were forged.

During the ongoing, 20-month probe, evidence also has been uncovered suggesting that the fight between Mosley and De La Hoya, a Top Rank boxer, may have been rigged, the sources said. Mosley won the September bout by unanimous decision but De La Hoya cried foul, demanding an investigation into the three judges' scorecards.

A law enforcement source close to the probe would not elaborate on the findings, saying only, "We have information that the De La Hoya fight was fixed."

A Top Rank executive, Lee Samuels, insisted that his company has turned over .everything the FBI requested. Arum was traveling out of the country, Samuels said.

"Neither the basis nor the purpose for the FBI request is known," Samuels said in a statement released yesterday. "We are fully cooperating with any requests made of us by the FBI and its agents in order to facilitate their job."

The probe was spearheaded by an NYPD detective posing as a wiseguy from New York trying to sell stolen booty in Vegas.

The FBI's Vegas office had asked the NYPD for assistance, and with the blessing of Police Commissioner Raymond Kelly, the former New York State boxing commissioner, the detective packed his bags for Vegas.

The detective teamed with an FBI special agent pretending to be his enforcer/driver, and they began moving among Las Vegas underworld figures. They cemented their reputation as goodfellas from New York, accumulating evidence through wiretaps and their own observations.

"These guys were solid in Las Vegas, flashing cash and acting like tough guys. It was all smoke and mirrors, but it worked," said another source familiar with the operation.

The detective began ingratiating himself with sports figures at hot spots such as Charlie Palmer's steakhouse at the Four Seasons and the ultra-exclusive private Foundation Room nightclub atop Mandalay Bay. He became a regular at Nine at the Palms and A.J.'s in the Hard Rock.

Arum, 72, a Brooklyn native who worked as a tax attorney for the U.S. Department of Justice under Attorney General Robert Kennedy, has been a charismatic figure in the boxing industry for nearly four decades.

His career was blemished in 2000 when he admitted to making an improper $100,000 payment to International Boxing Federation founder Bob Lee to sanction the April 22, 1995, fight between George Foreman, then the heavyweight champion, and Axel Schulz in Atlantic City.

Arum could not be reached for comment, but some boxing insiders recalled one of his famous lines from the early 1980s: "Yesterday I was lying. Today I am telling the truth."

"Okendo vs. Byrd was the worst decision in recent history.
There is no way Frez lost to chris, no way possible."