I just picked up these two pedals yesterday, the Xotic BB Preamp and EP Booster. Holy shit these things are awesome. My friend asked me about them, so I did a YouTube review on them...these things are seriously badass:

Scott Henderson said;
I tried the BB Preamp on my gig and I love it! After 3 years using the SD-9 I'm changing to the BB in my rack. I'll talk about it on my message board!
Scott Henderson!

Lee Ritenour said;
" I was worried about airplane travels in Europe. So I brought my new Signature model, which is a very nice guitar but it doesn't have quite the push of the sound that I like that I got from my old one. So I used the BB Preamp with the gain all the way down. I almost used it as a pre-amp in the sense of just boosting the clean sound a little bit. As a true booster of the tone and the volume. Almost like a compressor without compressing. It's very effective for me...."

Steve Lukather said;
I used my Xotic pedals and love them. They are my "secret weapon" at Simon Phillips studio. I used it on Tony Levins new Cd as well as some of the new Toto Cd. Luke

Greg Howe said;
"This is one of the only pedals I've ever played through that actually enhances most of the characteristics that I look for in a cool tone, and that are typically desired by tone conscious players. With most gain-boost pedals you sacrifice tone for playability.this pedal adds to the tone while giving you that fun playability. Very Nice!"

yeah- great pedals- I've bought and sold the RC Booster a few times, had a BB w/ mids and I still own the EP (ver. 1)....can't believe you haven't tried them until now-

That's a really helpful video review. (And dare I say... really, really cool? Cool... really!) I didn't know, especially, a pedal that is called a "pre-amp" could be as versatile as that. And I thought what a great hard-rock sound iwth all the distortion and was still chuckling when you said "... but if you're looking for a metal pedal, this ain't it".

And even though you're not demo-ing it, your playing sounds killer, too, btw.

I just used it for the first time live 2 days ago at a music festival in Sichuan, China (with singer Gary Chaw). I used them as a front end plugging into a Marshall 2000 halfstack. Those 2 active controls worked out great!!! I ended up putting the Bass +20% and the Treble about -20% and it worked great with the slightly bright Marshall amp...so fucking versatile.

I EP Booster was actually just a bit too loud, so now instead of 40% I think I'm going to set it to about 25% (or even 0%) as it is still quite a boost. I used the EP Booster on both with the BB Preamp for a distorted lead, but also used it to boost a clean sound with an MXR Micro Chorus and it worked well with that too.

Yeah the BB Preamp is kind of a "one pedal" to bring to a jam or session recording because of its versatility...it can be used as a:

Boost for solos
Gain/Boost for tone
Distortion into a clean amp
Super distortion (metal?) going into a distorted amp (never tried it, but I'm sure it would work pretty well).

Here's the mini pedal board I built: And here was the opening act before we went on :) I use my BB (mine is the Mid Boost model) for EVERYTHING. Im in two bands. For one I use it as distortion into clean amp. In the other its my lead boost/metal rhtyhm into a cranked Marshall.

I might get another so I don;t have to move it around from gig to gig.

Cool man, good to know how it works going into a cranked Marshall.


Seems like the Mid version is even more versatile...for me less dials to mess with is better because I suck at dialing in good sounds.

What are you thoughts on the Mid version?

jman- if you don't have it (doesn't sound like you do) you might want to seek out the ver.2 of the EP- the gain thing bothered some and Xotic re-released it with no boost at unity-

Interesting, that makes sense then about the EP Booster. I'll stick with what I have (I'm in Taiwan, so my options aren't so easy) luckily I think with it set at about 9:00 it should be ok.

Part of what I'm learning is "when" to use the Boost pedal. It's not like it always means SOLO = BOOST pedal. I'm learning it is more a relative thing, sometimes it works with a clean sound, sometimes with a distorted tone, sometimes it is not needed (like when going from a clean jazz tone to a lead tone - just using the BB Preamp is enough to boost the signal).

Just ordered this Korg Pitchblack Chromatic Tuner to complete my pedal setup. Gotta build a new board to add it, but it should work out great as a tuner and killswitch: 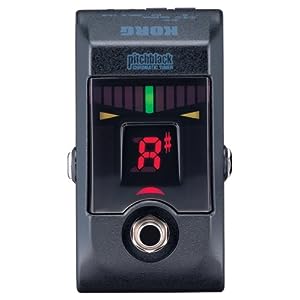 my EP is always on...it's my "fat" pedal...makes everything bigger- I use a pitchblack too...great tuner, never had a problem and it'll power other pedal as well

Just upgraded and created a new 2.0 version of my Mini Pedal Board including the Kork Pitchback tuner and the Visual Sound multi cable power supply. The only thing I don't like about the Korg Pitchback is that it doesn't have a latching footswitch like the others, it is basically a momentary contact switch that tells the MCU "hey I'm on", besides that, it is pretty cool. Thanks for this jman.

I don't know SHIT about this kinda stuff anymore... I've been working with new guitars, recording interfaces, and videos.

But I have been using the same prosessor for years. My BOSS GT-8 has kept me happy (after serious EQing and Mastering) BUT this kind of thing is thought provoking and musically inspiring.

Good job making me think about spending money I don't have...

I'm the same way, I worked at Line 6 for 11 years and never even used pedals before that (sometimes would use a floor POD thing, but hated it).

It also seems that now there are just SO many pedal companies out there, where as before there were what maybe 3? Boss, DOD and MXR. So the quality is insane now...but so are the prices.

I'm still not a "pedal/gear" guy. I think at least 75% or more of your tone comes from you fingers anyway. At this point "being a pro" and having a few pedals is almost mandatory. If you don't at least have a few pedals (for a session gig, or maybe a show or something) it looks pretty bad, because almost every other guitar player out there has them.

I feel your pain about the money, with the power supplies, cables and all of those pedals I spend close to $800 building this mini pedal board...OUCH. Luckily the gig paid me $1000 so I ended up with a small bit of profit.

Demitrius Barbito -  Thanks for this jman.

I don't know SHIT about this kinda stuff anymore... I've been working with new guitars, recording interfaces, and videos.

But I have been using the same prosessor for years. My BOSS GT-8 has kept me happy (after serious EQing and Mastering) BUT this kind of thing is thought provoking and musically inspiring.

Good job making me think about spending money I don't have...

Demitrius, I know you can play the living shit out of a guitar, watched your clips for a minute, no doubt.

J-man is giving us a good hint here. As cool as going digital is, we MUST refer back to our analog roots to remember TONE IS KING!

Damn, j-man worked at digital central(Line6) for a minute. That fact gives him all kinds of authority to speak on the digital/analog debate,yes?

You speak of your GT-8, but have you A/Bed it against a combination of analog effects and amp?

I just aquired a 85 reissue RAT, and let me tell you, it's just what it should be.

Back then, the RAT was the core of my tone. I'm rebuilding my original pedalboard. It will assault my Fender Hot Rod Deluxe. With taste.

I'll post when it's done. I'm back on the pursuit of tone that I FEEL. My Line6 amp kicks ass for fast access to a wide range of sounds, but it doesn't act the same as my old rig when I'm standing in front of it, turning and leaning into it to shift it's response. You KNOW what I'm talking about. :)

We went to see Jack White last month. His tone was great!

Looking at the schematic, they make it look so DAMN simple. Bascially a transistor input (kind of simulating a tube amp input) then some diode clipping on the gain to give it some more "tube" like qualities to the distortion, then some simple active bass and treble eq and then a transistor output (maybe to simulate again a tube amp out?).

Not 100% sure on that stuff, but those are my guesses...always looks so damn easy when you see it. Kind of like knowing the secret to a magic trick...after you know it...wow, that's SO easy, lol.

That pedal sounds pretty good, so many out there now, it's crazy.

That guy has a pedal that I just bought today to "add to my board" the Memory Toy:


I needed some delay pedal...now I have to figure out how I'm going to build my third fucking pedal board to fit this thing on it!!!

The only thing that "kind" of sucks is that some of these pedals can be a bit pricey. The quantity and quality of guitar pedals now is unparraled. I wanted to get the "Snow White" Auto Wah pedal. It was the best pedal for Auto wah I could find, but it was $300 here in Taiwan. In the long run, that's not a ton of money, but psychoogically I just can't get myself to pay $300 for one pedal...especially one that I won't you that often.