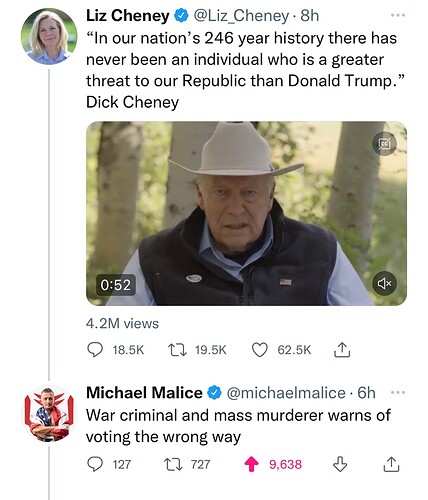 lol at this piece of shit. this motherfucker was instrumental in sending our country to war in the ME and thousands of lives lost. Fucking cocksucker!

The crazy shit is that somehow this motherfucker will be held up in high regards now by the Dems. When he dies if there is a hell he will be down there getting gangbanged like the scene out of Event Horizon.

Dick Cheney is now the most evil, vile POS to ever walk the face of the earth.

He’s always been a piece of shit. People on here have always said that.

The left still doesn’t get the concept of what the swamp is do they?

And Bushes and Clinton’s!!!

The karmic debt that this man has accumulated in just one lifetime is astronomical.

From the sounds of it, according to level-headed OGers, Dick Cheney is now the most evil, vile POS to ever walk the face of the earth.

Trump on the other hand? Second coming of Jesus.

Yeah, sanity has left this thread and its not coming back.

And if we’re being honest Trumptards only started hating him when he started hating on Trump. HOW DARE ANYONE CRITICIZE OUR ORANGE-STAINED LEADER aRRgGggHH!!! OUR SAFE SPACE HAS BEEN VIOLATED!!! MUST … ATTACK … THE INFIDEL!!! AaRrRgggHhh!!!

Fitting that Trump may be the most sensitive, insecure whiney little bitch on the planet and so his followers have clearly followed suit. From John Wayne to Hope Is Emo in less than a few generations. Sad.

You’re fucking delusional. No one on here thinks Trump is a saint and I remember tons of people on here hating on Cheney since 2003.

Keep carrying water. Go find what I was saying about Cheney and Republicans when I got here 17 years ago. I mention they are cowards once a day. All of you leftists make excuses why you would use the the most evil the Republicans have brought upon America. Not mean Tweets. War criminals. That is whom a bunch of you defend here in order to “get Trump” and are constantly defending.

I’m pretty sure in over a decade on this forum Cheney has always been despised by just about everyone.

She lost power. She was one of the highest ranking republicans. She traded her career to get shit on by 30% of the country because of her values. Even if you disagree with Cheney you have to respect she was willing to sacrifice herself for her beliefs imo

I know many people with it & think they’re idiots
The Cheney are probably billionaires at least 100 millions in family money
Dirty dick before Vice President set on the board of many companies
He is a dirty corrupt politician, his dike daughter is just riding his coattails
The Cheney & Bush & Clinton families hate Trump because he took away some
Of their power. I’m thankful for Trump for that

Liz is a dumb cunt & out of touch

“Trump when talking like that about women, “grabbing them by the pussy”
That’s sick !

People who Trump benefited greatly him hate him. Everything imo is worse under Biden
But people go with feelings

My 401k , gasoline, city crime rate
All much worse under Biden