Under no circumstances am i saying.anyone doesnt know shit. I am fully ready.to trust willie

Nopers. I didn’t take it any other way, friend. I hadn’t seen you around that other thread so I thought I’d do an introduction of sorts.

I recently bought a ruger .223 American… haven’t shot yet but it yakes my Lar 10 round pistol mags too…

Appreciate it dude. Im really a noob to gun stuff

Interesting note: If that’s an Anschutz that’s imported by Savage, you may have something kind of special. Not put your kid through college special but a very very nice rifle that will shoot past your ability for years and years. (This isn’t a bad thing.)

So this one of the three is the only one i offered any money for. I had seen a similar one sell for 1200. I told my friend she needed to make a price for me to pay for it. She appreciated my asking but insisted i take it

Ok, that’s a top of the line Anschutz .22. That’s a top tier target rifle. Amazing quality and flea’s ass at a hundred yards kind of accurate.

If you feel compelled to “pay” for it, make a donation to GOA in her name. I say that because I know exactly the feeling you have.

Her resoinse on my second time i told her she needed me to pay for ir was, “help me sell some of this shit.”

During the early 1960’s Sile Distributors of New York acted as import agent for Anschutz firearms. The few(?) Anschutz available in the USA at that time were marked Anschutz. These firearms can be identified by the Sile ‘import’ barrel markings.

In 1963 Savage arms entered into an agreement with J.G.Anschutz whereby Anschutz firearms would be imported into the USA, marketed by Savage Arms, & marked on the receivers Savage-Anschutz. These firearms were ALL Anschutz & identical to European marketed Anschutz firearms save for the addition of the Savage name. There is a question whether or not the Savage ‘stamps’ were added by Anschutz or Savage but from the tiny differences in font, & depth of impression is appears they may have been added at the Savage facility after import?? I’m not familiar with the ‘Target’ style rifles (not even sure that Savage imported any ‘dedicated target’ style rifles) but the ‘sporter’ styles, 54 & 164 pretty well all were stocked with European style profiles including a ‘schnabel’ forend, & probably were stocked by the Anschutz factory. The S-A 141 (& 141-M) rifles had an ‘upgraded’ stock & different buttplate & may have been stocked in the USA by Savage (or a contractor). The 141 rifles were identical to the 164’s except for a shorter 22" barrel & the upgraded stocks.

At the same time Anschutz agreed to accept & market some Savage mfg’d fireams for the European market. These firearms would be marked Anschutz-Savage. I dunno exactly which models or how many rifles were ‘exported’ by Savage but they were ALL Savage but were probably stocked by Anschutz. I’ve seen a few of these rifles that have ‘made their way’ back to the USA. Some dealers have sold them as ‘Anschutz’ rifles but they’re Savages & definitely don’t meet Anschutz standards for quality.

The Savage-Anschutz collaboration ended in 1981 & Anschutz firearms have been imported since by a number of different firms, mainly Merkel & Steyr USA.

*Any Savage-Anschutz marked firearm is a true Anschutz of equivalent quality to a comparable model European Anschutz.

An Anschutz-Savage marked firearm is a Savage regardless of its stock.

May have already been mentioned or maybe some folks can tell by eyeballing it but do you know or can. you see the model of the Savage Anschutz ?

For fun posting this video as searching around. If nothing else he has an interesting youtube handle.

Plus he starts the video with “Hi friends out there in youtube land”.

Read the comments though it gives you an idea of the general level of quality of the rifle. 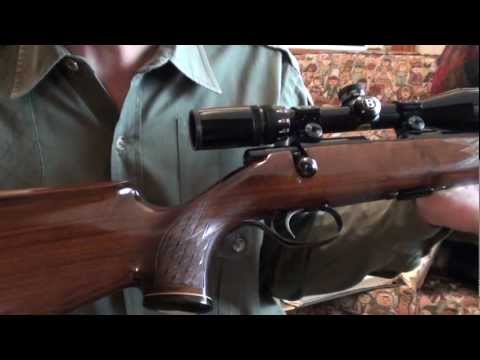 He paid something like 60 bucks from the local Woolworths… imported by CIL.

After that video i need to do more research on this one. Getting the bolt to “seat” on mine is not that smooth

Nobody needs more than 2….one for muh sport shooting, one for muh home protection

oh spjackson you silly goof. I hunt 8 different animals, would you really have me shooting a ruffed grouse with my deer rifle?

I hunt them all fall and almost always walk around with a 20 gauge and a .22 win mag for longer shots when I get in to clearings. Little spjackson would have me take up my whole arsenal with just my ruffed grouse gear…

Yeah its totally fine to shoot 5.56 through it. Per Ruger customer service, and the instruction manual. This is for the rifles from the 80s up to the early 2000s.

Never shoot 5.56 out of .223 chambers as a generality for sure. But all mini 14s except the target models are actually 5.56 chambers as it were.