Across New York, a law-abiding person can walk into a sporting goods or hardware store and buy a standard, pocket-size folding knife — and be breaking the law.

While exact numbers are not available, thousands of New Yorkers are arrested every year and charged with possessing a “gravity knife,” which the law defines as one that opens with “the force of gravity or the application of centrifugal force.” In other words, with a flick of the wrist.

In 1958, state legislators banned knives that had a blade that fell out of the handle when the user pointed it at the ground and pushed a lever. The same law bans weapons like brass knuckles and “Kung Fu stars.” But the modern knives sold in countless stores bear little resemblance to the knives that were the original subjects of the ban. Many people, including carpenters, construction workers and stagehands, have no idea that their knives can be made to open with a flick of a wrist — a skill many New York police officers have developed. Most don’t know that simply possessing such a knife breaks the law.

Between 2000 and 2012, New York City police officers arrested 70,000 people for violating the weapons law; based on a six-month sample reviewed by the Legal Aid Society, which represents indigent defendants, gravity knives account for more than two-thirds of arrests under the law. Most of these cases don’t go to trial, but the arrest itself, and the following entanglement with the justice system, can wreak havoc on a person’s life, especially a lower-income person who can’t afford to spend day after day returning to court. And while possession is a misdemeanor, it can become a felony if a person has a prior conviction, which could mean up to seven years behind bars.

In 2010, the Manhattan district attorney, Cyrus Vance Jr., charged 14 retailers, including Home Depot, with selling illegal switchblade and gravity knives, and agreed not to prosecute them if they stopped selling the knives, handed over profits from past knife sales and financed a $900,000 public-education campaign. Six years later, less than $100,000 of that money has been spent, and the knives are as available as ever. Mr. Vance’s office even granted an exception to Paragon Sports, a high-end sporting goods store that sells custom knives, because expensive knives supposedly aren’t being used in crimes.

But it’s not clear that illegal, cheaper knives are being used that way more than legal ones. According to data collected by the Legal Aid Society, in the second half of 2015, Mr. Vance’s office prosecuted 254 of its clients charged with gravity-knife possession. In only four cases was the defendant charged with intent to use the knife unlawfully.

The state’s Office of Court Administration has called for a change in the law, and a bill in Albany would exempt from the ban the sorts of knives that are widely available for sale and that the average person would need both hands to open. This would help to reduce the number of unwarranted arrests without endangering public safety. A similar bill passed the Assembly last year but failed in the Senate. There is no reason not to pass it this time.

Illegal knives confiscated in a 2010 crackdown on sales in stores in New York City. 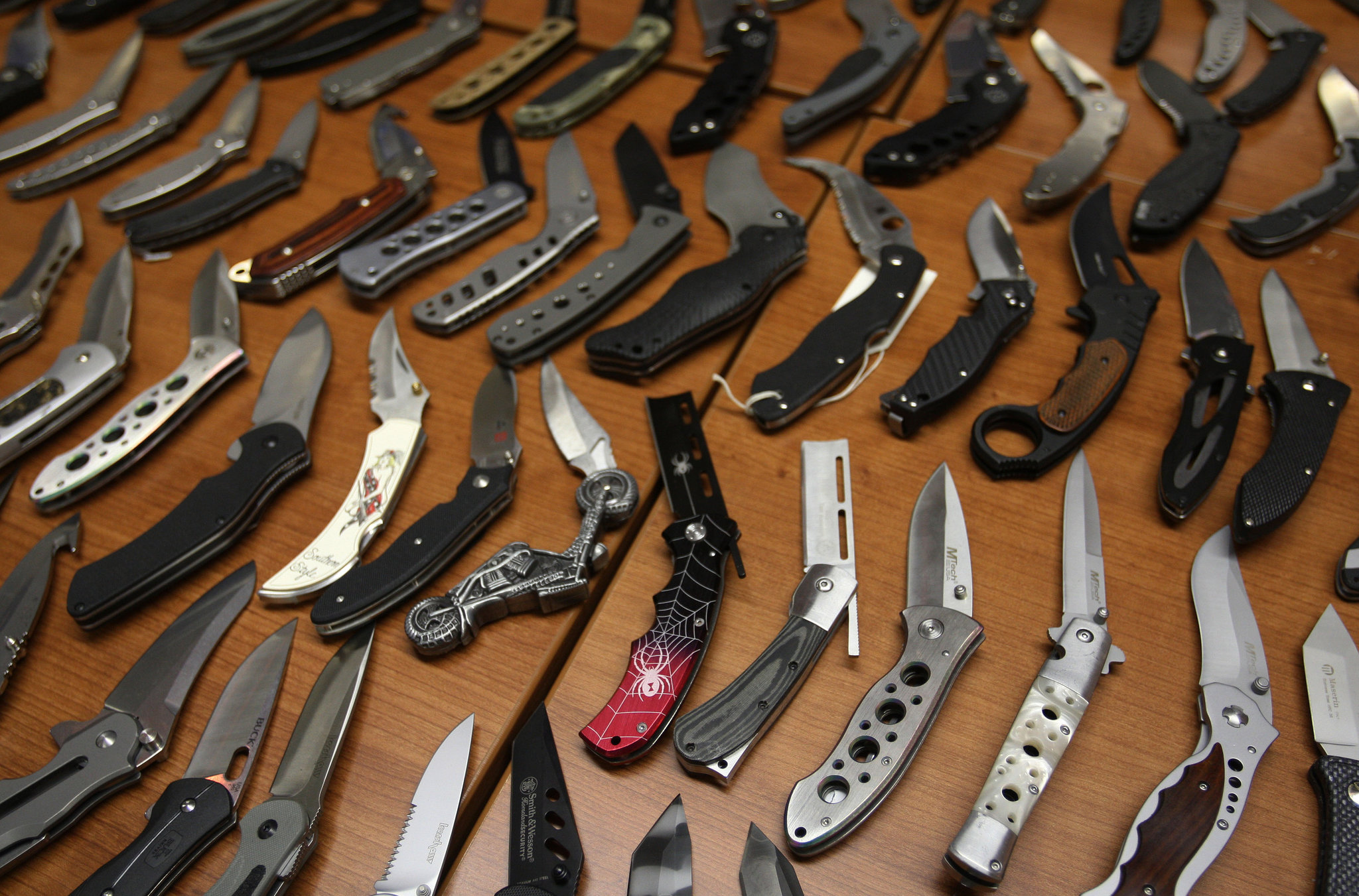 I've posted it a few times, but it happened to me and it fucking sucked.

The cop had to flick it as hard as he could five times before was able to open it that way, and even then it didn't open enough to lock open. Didn't matter.

And when it came time for a trial, my lawyer simply had to say, "Judge, it was NOT a gravity knife." and that charge was instantly dismissed*. The court KNOWS the cops are incorrectly enforcing the law as a routine.

* - Well, it was really brought down to "causing a public disturbance" because the sight of my knife clip was apparently causing an invisible riot.

I've posted it a few times, but it happened to me and it fucking sucked.

The cop had to flick it as hard as he could five times before was able to open it that way, and even then it didn't open enough to lock open. Didn't matter.

And when it came time for a trial, my lawyer simply had to say, "Judge, it was NOT a gravity knife." and that charge was instantly dismissed*. The court KNOWS the cops are incorrectly enforcing the law as a routine.

* - Well, it was really brought down to "causing a public disturbance" because the sight of my knife clip was apparently causing an invisible riot.

I think you posted this story here before. Weren't you on a job or something like that, and dumbfounded?

On Halloween in NYC about four years ago, I was stopped in the Subway and a cop examined my knife (kershaw 1550st). It has assisted opening and he said it was illegal (gravity knife) and I politely argued about the mechanics of it, and indicated that the spring only helped it open when you already started opening it, there was no button or lever, and it couldn't be flicked (unless you simultaneously apply presssure with your thumb on the little peg, which has nothing to do with flicking it) and he actually ended up agreeing with me, and giving it back. He told me I couldn't keep it clipped to my pocket and to put it away before a stricter cop saw it, because despite it being a legal knife, i couldn't have it on Subway property. I think he realized I was a reasonable, non-threatening person in our interaction, and didn't wanna deal with the hassle on such a crowded night.

I wrote it off as just a weird situation, but when I was in NYC a month ago, a friend of a friend advised me to unclip the same knife from my pocket and keep it concealed, because it is still really common to get stopped for having a folding knife. It is a daily carry that I use for everything. Really ridiculous.

I'd actually started my day cutting ribbons off chairs we'd rented for a friends wedding and I just forgot the knife was in my pocket. I was on my way into the office when they stopped me in the subway. And, you're right, even a legal knife can't be exposed in any way on the subway; that's an MTA thing. That's why in the end I still had to accept that "public disturbance" charge.

I even tried convincing the cop. "Look, it's not a gravity knife. You saw that's a lousy way to open it. It's obviously faster, easier, and more reliable to open it with your thumb."

His response: "Yeah, but some of these guys have them real loose. You get guys coming fresh out of prison and then can just flick it out and cut your face in the blink of an eye!"

Now, I'm sitting in the back of the squad car in my sport jacket, button down shirt, dress shoes, and a tie. And, I'm thinking, "What single part of that statement had anything to do with me?"