You signed a contract…EAT IT!

It shouldn’t matter what the next man got yesterday. 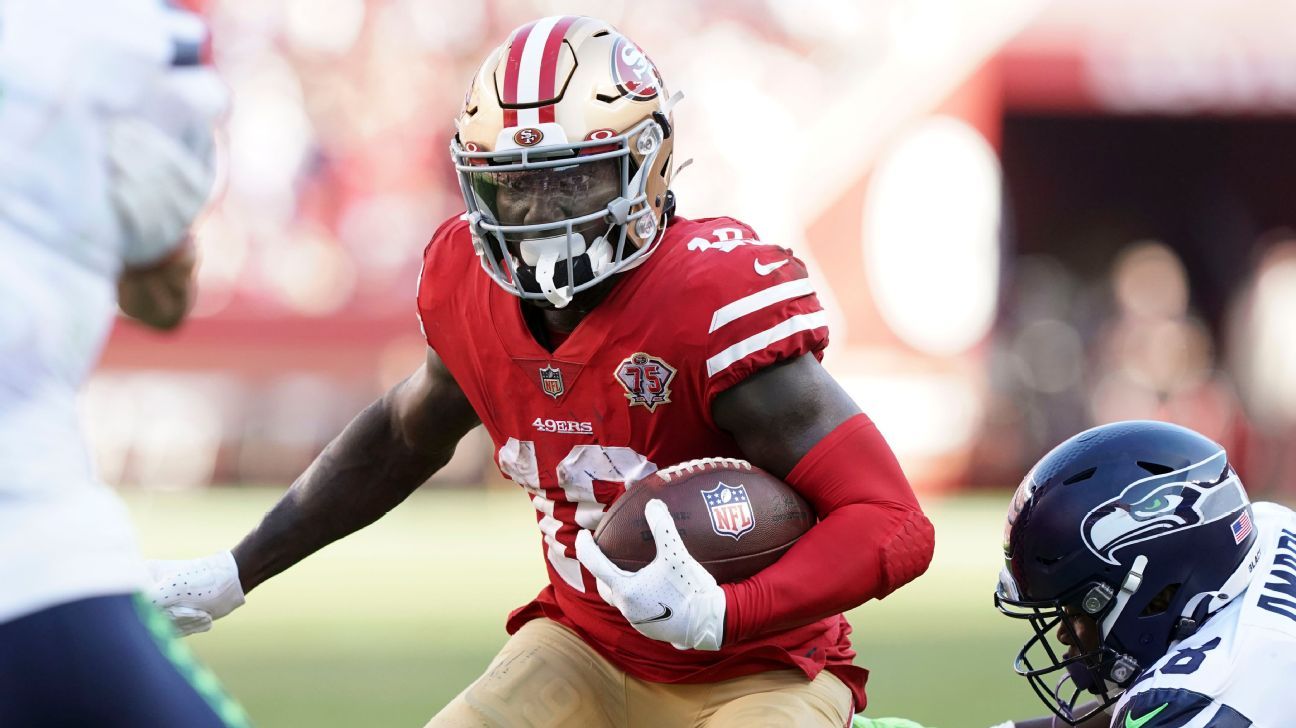 Deebo Samuel, A.J. Brown and Terry McLaurin all are seeking new contracts and are not expected to participate in any on-field work during their respective teams' offseason programs, sources told ESPN.

In an offseason that has seen record-breaking contracts for wide receivers, three of the NFL’s top young players at the position are looking for new deals of their own.

The Raiders signed Davante Adams to a record-setting five-year contract last month after acquiring him in a trade with the Packers. The deal is worth up to $142.5 million, includes $67.5 million in guarantees and will pay Adams an annual average of $28.5 million – at the time, an NFL record for a non-quarterback.

The Dolphins topped those numbers one week later, signing Tyreek Hill to a four-year, $120 million deal after their blockbuster trade with the Chiefs. Hill will make a record $30 million annually, receiving $72.2 million guaranteed and also $52.535 million at signing.

Seahawks star DK Metcalf, another second-round pick in 2019, also wants a new deal but also has been the subject of widespread trade rumors as Seattle mulls a complete roster rebuild after trading Russell Wilson.

The Seattle Times recently reported that, despite the uncertainty about his future, Metcalf is planning to participate in Seattle’s on-field workouts, which begin Tuesday.

Samuel, 26, is coming off a breakthrough season during which he helped San Francisco reach the NFC Championship Game. He finished fifth in the league with 1,405 receiving yards, caught six touchdown passes and also rushed for eight touchdowns – an NFL single-season record for a receiver.

Brown, 24, battled injuries last season after eclipsing 1,000 receiving yards in each of his first two years with the Titans. He had 63 catches for 869 yards and five TDs in 13 games; Tennessee went 11-2 in the games Brown played.

McLaurin, 26, enjoyed another productive season in 2021 despite Washington’s inconsistency at the quarterback position. He had 1,053 yards – his second straight 1,000-yard season – and five TDs on 77 receptions.

Sources told ESPN’s Adam Schefter that 49ers star Deebo Samuel, Titans wideout A.J. Brown and Commanders receiver Terry McLaurin all are seeking new contracts and are not expected to participate in any on-field work during their respective teams’ offseason programs.

The Titans and Commanders begin their offseason programs Monday, while the Niners start Tuesday. McLaurin still plans to report on time for the start of Washington’s program while his contract remains unresolved, a source told Schefter.

Samuel and Brown were second-round picks in the 2019 draft while McLaurin was a third-round selection that year. All three players have one year remaining on their rookie contracts and are in line for new deals amid an exploding wide receiver market.

I think it would be fair to renegotiate the contracts but take away any guarantees.

I can’t fault the players for doing what they gotta do but the system is clearly broken.

I used to be all like “You signed a contract, you should honor it!” but Ive changed my tune on this. Each side should do and say whatever they want and think they can get away with. NFL teams have created this environment by caving to some players’ demands outside their contact limits, and will do whatever it takes to get what the think they need. Players should do the same. If the teams want to cut guys they reneg on contracts, they should, but the way the league is now, it will simply benefit another team who picks those guys up. The league has the power to step in and control some of this stuff, but if they dont want to, its every player and team for themselves. Players are rich diva faggots, but they have a very short earning window compared to their life expectancy. Teams rightfully think of players as pieces of athletic meat. Have at it.

The receiver position is loaded with talent, with more coming into the league every year. Why blow out your cap on a WR and a QB?

All this pro sports money should be confiscated and used for something else.

hopefully it will be used to send you to faggot rehabilitation

So you basically changed your viewpoint strictly because of greed?

Do you go back to your employer every year and demand they pay you more or your going to stop particpating in parts of your job until they do? Were not talking merit or yearly based raises. Just straight up i want more money or im going to fook with your production and business.

Personally i think every player should have certain performance stipulations in their contracts based on player output and if they dont hit those then they owe back a certain percentage of their contract back to the owner. Im not talking bonus performance. Just regular old so your job and get paid.

Teams don’t honor contracts either. They’re happy to trade or cut a player.

The guaranteed money is pretty new in football.

I don’t care about their off the field negotiations and disagreements.

Most of these dudes spend their earnings as fast as they can get it. This reckless spending creates strong economies.

Sorry but nope. I’m a Bills fans. They renegotiated Diggs’ deal. Was he pissed (jealous) at recent huge contracts some WR got? Maybe. Hopefully not enough to have pouted and skipped training, but we’ll never know. But the Bills also got him for 4 more years, salary cap friendly in the circumstances, etc.

I’d fine with them voicing some discontent, but skipping training, having attitude? Like WTF. When they signed, it was surely the best deal they could get at the time. Sign shorter ones for more risks yet more gains, or STFU.

Let em sit, fine them. Have your agent get you a better deal on your next contract.

Exact reason I quit NFL many years ago. Greedy fuckstains that either want money or be traded to a championship contending team.

Most of those players couldn’t negotiate a better contract. Rookie slotting.

Later in career I have less sympathy. But draft picks get screwed.

I a business across the street was offering a better job, normal people would take it. Draft picks don’t have that option.

I a business across the street was offering a better job, normal people would take it. Draft picks don’t have that option.

Most people don’t come out of an unpaid, unfinished university degree with a guarantee of a $700,000 tag on their first work contract that they sign either and that’s the minimum.

I find all this stuff to be annoying bullshit but the nfl has to be one of the coldest, business first pro sports leagues out there so if the players can make more money using these tactics then so be it.

It’s still a really terrible look for the players.

I’m just saying that no NFL team has “morality” as part of their manager process. They do and get away with paying what they can get away with withing the rules of the nfl. The fans don’t see as much of what’s wrong with the.teams as they do what’s wrong with the players because we are interested in the players lives not the gms lives. If the teams want to get together and stop screwing each other over by caving and put their foot down on holdouts as a unified league, they should do that. Until then, the players should do and get away with what they can the way the teams do. Neither players nor gms get paid based on how nice they are and how well they follow the rules. It’s up to the nfl as a company to decide what is allowed and what isn’t. Plus, the nfl players association is the worst of any sports league in terms of helping players. Most dangerous game, shortest career, least pay and guarantees? C’mon man!

I don’t agree with you here OP especially in the NFL.

In the NFL players get hurt all the time, imagine waiting for a new contract and you tear your ACL or something along those lines, changes everything for you.

I’d want the guaranteed money and new contract before risking anything.

Yeah, Im not saying the NFL shouldnt crack down on holdouts or that teams shouldnt get together on freezing them out, but until that happens, NFL players should do whatever they can get away with to protect and improve their money. It’s hard to build a winning team in the NFL. You can bet your ass that owner’s and GMs use everything at their disposal to build a winner and give zero thought to whether or not they are being “fair”. Players have an average of 5 years to play and/or set themselves up to make a lifetime worth of money. All’s fair in love and war.