Ninja master tries to cut cucumber on student's neck, gets both

Ed Parker’s Long Beach International Karate Championships began on August 2, 1964. A then-unknown 5’ 7" tall 140 lbs. instructor did a demo that wowed the crowd, and led to a part in a television series, which in turn led to movie stardom. His name was Bruce Lee.

In 1996 there was another demo at the Long Beach Internationals, with an infamous rather than famous ending.

Ninjitsu teacher Keith Carlson attempted to use a sword to slice a zucchini resting on the neck of his student, Daniel Stark. However, Carlson cut both the vegetable and Stark’s neck, which promptly began to gush blood.

Medical personnel rushed to the stage to tend to the misbegotten student.

“We were able to stop the bleeding right there on the stage,” said tournament physician, Dr. Joe Verna. “The emergency room doctor said the wound was potentially dangerous, [but Stark] lost less than a pint of blood.”

Sheri Parker-Kongaika, event associate producer and daughter of the late American Kenpo Karate founder Ed Parker, said the demonstration was not approved, and that there was not supposed to be anything dangerous, and no sword on stage.

“[Carlson] was cooperative with us,” she said. “But when he got on stage, he obviously had a different agenda.” 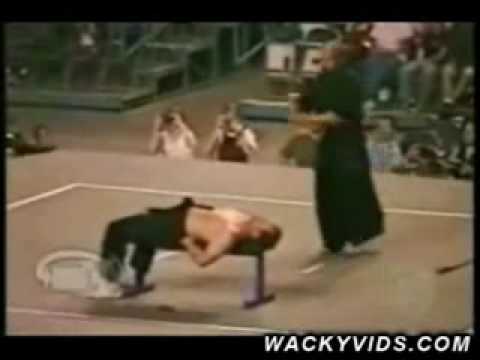 Stark said he would gladly do the stunt again.

“It was very unfortunate that it happened,” he said. “What we do is real, and I guess we proved that.”

The pair of dimwits proved only that dangerous demos are stupid. It does raise a question though. Who here is the bigger fool? Is it the assistant being carried off on a stretcher to the hospital, or the sword-wielding “ninja” who put him there?

Today Stark runs a Wing Chun studio in Northern California. The scar is said to be barely visible now,