Notice how there are no atheist champs

Atheists can’t fight because God gives strength to the sword of he whose cause is righteous.

Atheism is a mental illness.

This is the most low IQ take ever presented on the UG.

Why did I respond to this thread?

How many Gods are there?

How many losses have happened to Jesus believers though?

God can’t fight for shit either. It makes humans do it instead.

2% of the prison population identifies as atheist.

Atheists are overwhelmingly intelligent, functional and law abiding people. It’s the religious simps who are causing a majority of the problems.

As an atheist myself, I totally agree with your statement. The worst part is the mental illness.

I tried the religious thing, but that imaginary guy up in the sky, yes up there, never showed himself. That in itself gave me this mental illness.

Did you leave the cookies out on the 24th? Rules are rules.

How many Gods are there?

They do though…Muslims even believe there was a Jesus, just that he was a prophet and not the son of God

Conor and GSP both are Atheist 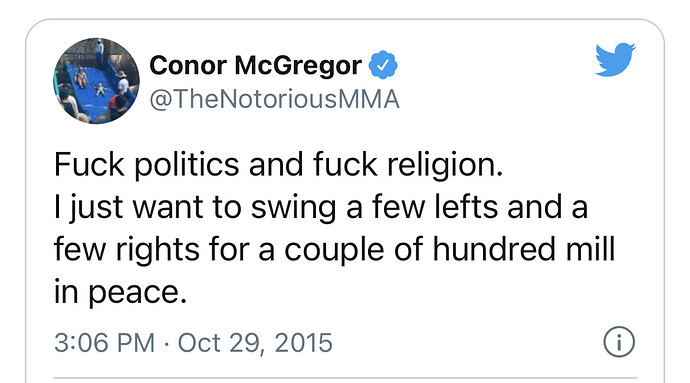 What does he even expect?!
Sure, some guys can’t wait to praise gay jesus after they get the W and the mic.
But what is an atheist supposed to say?

Uh, so I want to thank my family and coaches, but also, just so you know, maybe there is no god out
there, amiright? Just a thought!

It’s more like those following semitic cults feel obligated to preach for a couple of seconds if they sense they have an audience.

I was thinking that this is one of the dumber threads I’ve seen in a long time, then I saw who made it and everything made sense.