NY - violently rob someone? get released without bail

The creep accused of slashing an Asian woman in Times Square with a box-cutter had been arrested for a violent robbery just days before the random attack — but a lax Queens judge let him walk free, prosecutors said Wednesday.

Anthony Evans, 30, was cut loose on supervised release by Judge Denise Johnson on July 27, despite facing second-degree robbery charges for allegedly slugging a a grocery store worker and, in a separate case, swiping a case of beer, according to officials and records.

Prosecutors with the Manhattan District Attorney’s Office cited Evans’ being free on a violent felony as part of their argument for why he should be held on $200,000 bail over the Sunday attack, which is being investigated as a possible hate crime.

The judge ended up ordering the suspect held pending a mental evaluation at the arraignment early Wednesday in Manhattan Criminal Court.

Cops say Evans attacked a 59-year-old seamstress pulling a rolling cart on Seventh Avenue and West 42nd Street on Sunday morning — leaving her with 19 stitches on her hand, according to a criminal complaint.

The slashing came only a week after Evans on July 22 allegedly stole a package of noodles from SkyFoods on College Point Boulevard, according to court records.

A manager, who spotted the theft on surveillance footage, followed Evans out of the store and got clocked in the face when he confronted him, the criminal complaint said.

Four days later, Evans allegedly walked into a Walgreens, picked up an 18-pack of Miller Light and strolled out of the store without paying, according to court records. A female employee grabbed the beer from him outside, the complaint said.

Evans was arrested July 26 and charged in both cases. He faces charges of second-degree robbery, which is considered a violent felony, as well as petty larceny, over the grocery store incident, records showed.

Prosecutors had requested bail be set at $50,000 during his arraignment on July 27, according to a spokesperson for the Queens District Attorney’s Office. But Johnson released Evans without setting monetary bail, according to officials and records.

Both those cases were adjourned until Sept. 22, the DA’s office said.

Evans is now facing additional charges of assault, attempted assault and criminal possession of a weapon in the caught-on-video Times Square attack on July 31.

He was seen in the video rushing up to the woman, raising his hand above his head and bringing the apparent box cutter down to her hand, according to court records.

Evans also had two misdemeanor convictions of assault and a robbery for which he was granted youthful offender status.

He is due back in court Aug. 25, according to the Manhattan DA.

Johnson — who was elected in November 2021 — caught heat a few months later when she cut loose a reputed gang member charged in a bar shooting after cops tracked him down to North Carolina, despite even his defense lawyer calling $50,000 bail “appropriate,” The Post reported at the time. 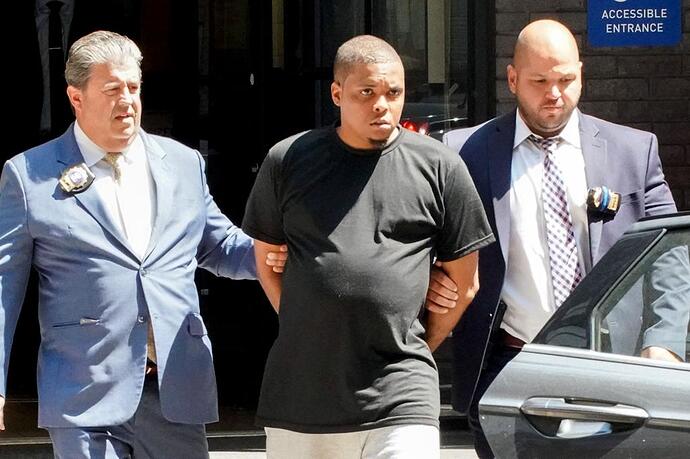 The slashing came only a week after Evans on July 22 allegedly stole a package of noodles from Sky Foods on College Point Boulevard, according to court records.

This is all being done on purpose.

This is all being done on purpose.

Immunity to the protected.

Because leniency for violent offenders always softens the offenders heart leading to a new path of personal improvement and contribution to society.

My brother lives there. When all this started I was sending him the articles, he said it was right wing propaganda. I literally called their district attorney’s office and spoke to someone there that confirmed everything and gave me her number to pass on to my brother if he still doubted it. Absolutely insane.