A New York City cyclist’s knowledge of Brazilian jiu-jitsu helped him come out on top in an impromptu scrap on a summer day in the city. The incident took place at a set of traffic lights close to the Intrepid Museum in Manhattan.

It’s unclear why the altercation occurred in the first place. As the embedded footage below begins, the fight is already underway, with the cyclist in blue shorts grappling on the sidewalk against another man in a yellow top, and a female companion. 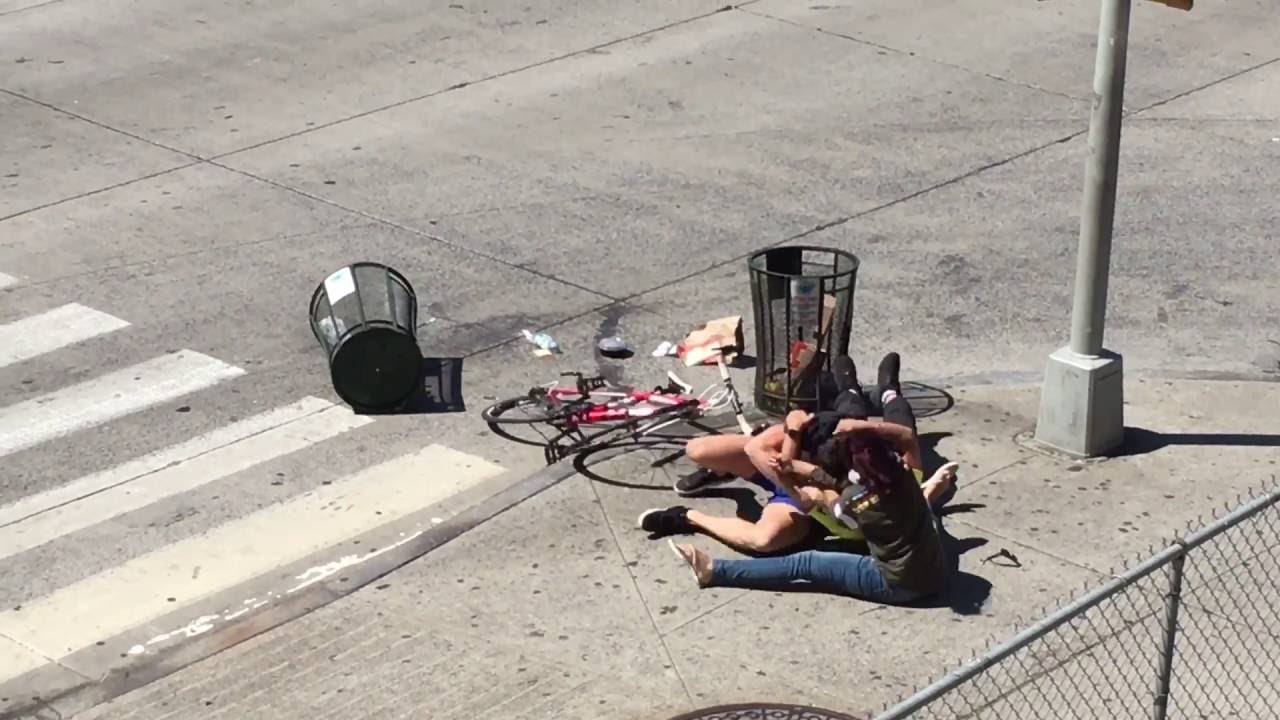 Blue secures side control and starts to land a few punches to the head of yellow, while doing his best to avoid the woman who is trying to fend him off with slaps and punches to the face.

Blue clearly has a BJJ background and that enables him to pass to full mount, and he displays good control to remain on top even when he’s shoved by the woman at the same time as yellow scrambles and attempts to put him on his back.

During the struggle, blue loses a sneaker, which the lady hurls onto the road and before returning to attacking him, just as he’s trying to unload with some ground and pound. All the while, cars drive by as the trio’s throwdown inches closer into the street.

At this point, the woman is more of a nuisance than a real threat, but her presence distracts blue for a moment, as does a passer-by who’s also now trying to intervene, so he stands up from the mount. This gives yellow a chance to partially get up and drive for a double leg takedown.

Blue is able to stuff the takedown and counters with a guillotine choke. Police sirens can be heard approaching now. Blue is able to subdue yellow with the choke until they arrive; he simultaneously does his best to protect himself from the woman’s continued attacks.

Blue lets go as the officers approach, but yellow isn’t quite finished yet, and launches a couple of punches at his adversary in full view of the police. That ends up focusing much of their attention on him, as they try to bring the scene back under control.

It’s hard to say who was initially at fault here, but blue’s knowledge of jiu-jitsu enabled him to take control of the ensuing fight, despite it being a two vs. one situation. However, this video also identified a potential weakness in jiu-jitsu.

While Jiu-Jitsu is likely the best single style for a one on one confrontation, it is potentially problematic vs. two people. While the woman was not able to cause much damage, if she was a man, she likely could have. And then again if she was a man, the jiu-jitsu student might have reacted differently.

In the final analysis, the only thing that can be said definitively is that the man used jiu-jitsu, and defended himself successfully.