Off The Grid Homes

Could you live off the grid? These homes look pretty cool! 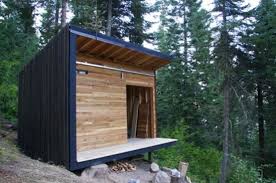 Isn't it near impossible to live 'off the grid' these days?

Alek Lisefski is a web designer who decided to take everything we know about building a house and flip it on its head. Instead of going in debt for hundreds of thousands of dollars, he built his own home for the low, low price of $30,000. It’s only 8x20ft, but that’s what makes it awesome. It’s a tiny house, it’s mobile and it looks so cool I would give anything to live in it for a day.

Alek wanted to change his focus in life, so he built this small house.

“Inhabiting such a small space will force me to live in a simpler, more organized and efficient way.”

He, his girlfriend Anjali and their dog Anya moved into the tiny house that he built.

Upon completion, he towed the house all the way to California, where the small family now resides.

Instead of focusing on paying off debt, they can instead spend their money on leisure and travel.

Not only that, but the small space won’t distract Alek from his work.

The bathroom is small but functional. The tiny sink doesn’t take up much space, nor does the shower.

On the second floor of the house is a loft.

It’s used as their bedroom with a full mattress.

There’s even room for closet space along the wall.


nothing worse than taking a shower and feeling like you just went 3 rounds against the cage with Randy Couture.

love minimalism and simplicity, but make the space big enough for my 6ft4, 220lbs frame to move around in without constantly bumping and smashing into something.

Al Cappucino - Isn't it near impossible to live 'off the grid' these days?

That's a phrase that means different things to different people. Sometimes people simply mean being off the electrical grid.
nobigdeal May 2, 2014, 11:20am #13

Al Cappucino - Isn't it near impossible to live 'off the grid' these days?

A lot of those houses don't look "off the grid". One looks like it's on a golf course.