I would highly doubt that. First, I feel as the network buys into the wokeness and if anything, would encourage it. Secondly, if it got out, which it would, it’d set them up as discriminatory.

Jazmine with her over the top hillbilly accent is so annoying. Seems so fake. And that ex cop lady doesnt seem stable enough to have bern a cop

Probably why she isn’t a cop any more.

No one completely hateable? You’re not watching Daniel close enough. He bought into the toxic bullying and went full Evel Dick on Taylor. But where as Evel did it for game play, Daniel was just being nasty and hateful.

That may have happened in the episodes I’ve missed.

Jazmine with her over the top hillbilly accent is so annoying. Seems so fake

It’s like she can’t figure out how she wants to portray herself. Sometimes it’s a hillbilly accent, sometimes it’s ghetto and she’ll switch between the two during the same sentence.

They got a ton of shit for it last year though and the ratings tanked. It’s the first time I totally stopped watching it halfway through. It was full blown racism on tv, they went after all the non blacks till it was only blacks left. If that happened again the franchise would be toast IMO.

This game is the first in a long time where players are making moves to actually win. And they aren’t just pushing race card and woke bullshit. Which is nice. Seeing them blindside pooch seemed like a waste. But the Ameerah move was nicely done.

Daniel and Nicole were so arrogant about her not going home, it was absolutely beautiful seeing Daniel start throwing a fit when Nicole got voted out

It was great seeing them crowing on about how they were running shit in the house, only to have Nicole sent packing.

The look on Daniel’s face when the vote was read and him being the only one voting Taylor was priceless.

Did you hear him complaining after her picture went gray, before the episode ended? “Seasons over” “Wait for me in Cali, Nicole”

No I missed that because we were laughing too hard and how shocked and pissed off he was.

I was hilarious. Everyone was in the kitchen together and he was by himself yelling to the camera. “Seasons Over” “Nicole wait for me in Cali. I’ll be there in a week” etc.

And him saying “you know you all can’t split the check” or something like that. It was beyond pathetic.

Yeah, since I started watching Big Brother, last season was the first time I tapped out, and rather early on after it became blatantly racist.

People got kicked off that show for less.

The crippled chunk would have been kicked off any other season, but they don’t want to be accused of “ablesim”, her fake country accent and sayings drive me nuts

There was another season with a similar thing, and they carried her pretty far (no pun intended). It makes her the ultimate goat because she can’t be competitive in anything. They can basically dump her anytime they want.

“I’m a former detective. I can read people.”

what a delusional stupid cunt! in her post eviction interview w/the head tranny, you could tell that she clearly understood that she was in the process of being exposed as one of the worst players of all time.

someone has to be able to find out why she’s no longer a cop.

There was another season with a similar thing, and they carried her pretty far (no pun intended). It makes her the ultimate goat because she can’t be competitive in anything. They can basically dump her anytime they want.

That was Christmas, the really hot psycho bitch. However she was extremely athletic. This one here is the antithesis of her.

Fuck it, we need a photo 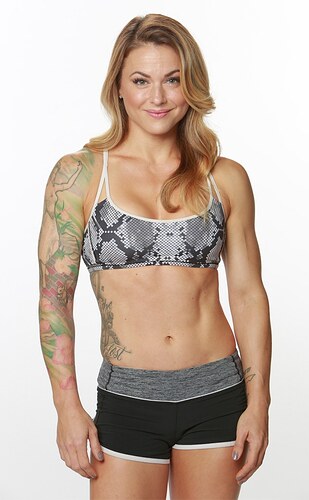 So many people volunteering for the block this season and then going home. Will be funny if it happens again this week.