Let’s face it, cyrpto is here to stay and is hailed as the 4th industrial revolution built on blockchain. There is a lot of money to be had and made in this financial space, especially in the coming years. I know that it’s not the easiest thing to get into but don’t be left behind while the nerds capitalize on it.

Lets use this thread to discuss all things crypto; from the technology to investing in the stablecoins and the altcoins

I’m just starting to get back into crypto as an investment vehicle with around $15k to play with. I really believe that investing smartly into crypto is the fastest way to build your wealth in today’s climate where inflation is on the rise and the fiat is losing value.

I’ll be posting some of my strategy and resources in this thread, hopefully some people with more experience can chime in as well.

Ok so my quick history with crypto, I used to mine for bitcoin back in the day with computer rigs with 3 video cards in each. I had a good 20 bitcoins churned through countless hours of mining and stupidly sold them for $700 each after the huge bitcoin collapse. I’ve been bitter for years since and didn’t want to turn back to crypto. My colleague told me about Ethereum at its inception when it was only a few bucks and I completely ignored it, and now it’s $3300 U.S.

We were all stupid about bitcoin and not many had predicted it’s rise to where it is now. Someone actually made a thread here on the OG when bitcoin was only like a dollar each, I remember this…what was it like 15-20 years ago? I remember wanting to put in $500 but got lazy so it never happened. Anyway, the past is the past and all we can do is look ahead now.

So lately, my buddy has been hyping up this coin called XRP by Ripple. I’m sure many of you crypto guys have heard about this coin. It has tremendous potential, being a utility coin that can process bank transactions in an instant and cheap. The SEC is essentially trying to essentially “cock block” from getting big because it would have huge implications on the banking industry in the U.S. and for Wall Street. This coin has been suppressed and is currently only $1.08 U.S. but has potential to skyrocket if/once the litigation between SEC and Ripple is over. It’s a mess but many believe that a ruling or settlement is imminent. Anyway, so my friend convinced me to invest a few thousand dollars into XRP based on its potential of going 10x, 100x, or even 1000x in the future. I’m pretty sure that the SEC is trying to drag this thing out for as long as possible to bleed out the normal consumer so that they or the gov’t can swoop in later to get their dirty hands on this coin.

I’ve been watching a lot of Youtube videos from crypto experts and they’ve convinced me to diversify my portfoliio to include more altcoins. My strategy is to invest maybe a thousand dollars into each altcoin that I think has solid growth potential and also maybe throw a bit of money into a couple of higher risk penny coins. Some names that come to mind right now are Cardano, HBAR, Quant, Algorand. As for the high risk altcoins, I am starting to follow the guys from “Run Guys” Youtube channel, they seem to know what they’re doing.

The bottom line is that crypto is very volatile and his a high risk / high reward type of investment. Please only invest with money that you can afford to lose. My threshold is $15k to start, let’s see where I end up in 3 months, 6 months and over a year. I figure that if I lose it, it would set me back but wouldn’t destroy me. I win, I could be set for financial freedom.

Why don’t you guys jump into the fray as well? Start off by opening up an account at one of the main crypto exchanges and start by investing a little bit of money just so that you get used to how cyrpto wallets and transactions work.

I own some basic alt coins. And i got plenty burned by some scam shit coins. But in general I think crypto is the direction in which our future lies.

Shibu just dropped on Coinbase, you can get 12 million shares for $100, it will get a bump from just being available on Coinbase, a penny will fill your bank account.

68% return already in 1hr, they are pumping, get in before the dump and print some cash

It’s a novelty meme coin, worthless, but it’s like 0.000008 and there are thousands of people on Coinbase who find cheap coins and get in and out in the same day.

With it just hitting Coinbase there will be an organic lift just from them.

There are infinite coins, but it’s prime to grab cash.

I know dick about blockchain, I watch the Buy/Sell percentages, when the 80% hits 60% I sell. Lol 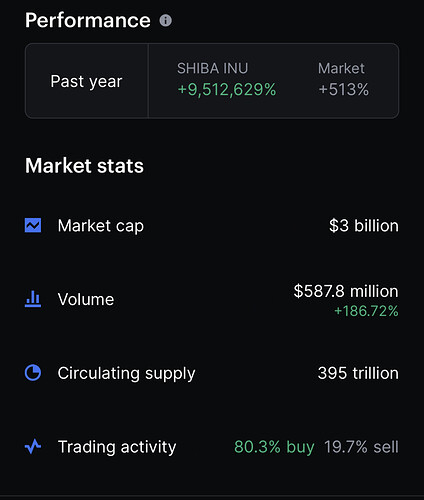 I don’t really know shit about it. I use Crypto.com. I figured I would buy some BTC and ETH when they were down back in may. SHIB seemed like a good gamble for 1k…

Damn, I missed the Shiba pump today, just purchased $375 worth on Coinbase. Trying to fund my Crypto.com account for more flexibility, will have to do it tomorrow since I’ve reached my e-transfer limit for the day.

I have most of my holdings in XRP (for long haul) but also have a couple of grand in Cardano and Algorand.

I just prefer the CB app, Crypto.com has so many fn wallets. Lol

Same, I HODL Cardano and fart around with the alts, but I pump and dump them mostly.

I did ANKR for about $5k in a day when it went to .23 and recently rode ACH up and down several times. You get so many coins for a grand it’s hard to lose your initial investment at <.10

Shiba Inu looks to be the new Dogecoin. We need to have Elon Musk on Tweet notification this guy friggin drives the price of useless meme coins up with every tweet.

I’m just getting back into the game. Being in Ontario, CA I feel handicapped because Binance has been outlawed here amongst other exchanges. I really want to get into the penny stocks suggested by the guys from runguys.com but I think they’re offered mostly on Binance.

I did the same thing as TK, I got 100,000,000 just to see if it pops. I think when people see it they will grab some just for novelty, the supply is endless though

I’m telling you guys…XRP for the long haul. Just put down a couple of hundred bucks at $1.40 (Cdn) and leave it there

What is the SEC timeframe? Is it going to be years?

It’s already been going on for close to 2 years, things have been heating up in court. The SEC is corrupt as hell, they basically propped up Ethereum years ago but have been witch-hunting on XRP for 2 years now.

XRP has the most real-world usefulness of all the coins, it’s a utility coin that will be used in bank transactions all over the world plus many other potential use cases but the SEC is stymying innovation because they are either protecting wall street or want to have more power and control over crypto. XRP can be bought on exchanges outside of the U.S., I bought mine at netcoins.ca.

I have a little too much invested in XRP but I’m just going to hold because there’s just too much potential in this coin. It has been suppressed and if it breaks out, it’s going to let loose.

To answer your question, I’d say that the timeline for a settlement is closer to weeks or months than years.