I’ve been having some reservations the past few days. So if you’ll indulge me I’ll work some of it out in a train of consciousness.

It does appear that market participants have leaned from extremely short gamma to relatively flat (still short) gamma and net short delta.

Vol hasn’t popped like in last significant down moves.

PE’s are not too high. Market wide they are generally near historic levels.

Lots of public announcements about market going down and large firms buying. (When Goldman tells its clients to sell, you should probably be buying). Private equity is starting to buy (Robinhood today, Buffet last week)

The easy trade is rarely the right trade, and it’s very easy to trade a sell off right now.

The markets pricing of future inflation and the feds public goals are NOT in sync. The market seems to think the fed is going to be way more successful than even the fed thinks it can be.

CPI numbers today were worse than every single estimate that I saw. Which means all the phd economists were wrong about how deep the shit we are all standing in really is. The expectation today was we would be at the start of the downslope as far as inflation. Clearly not the case.

Planting reports world wide are troubling. Between fertilizer costs and supply, weather (particularly in China and northern US states) and war, we are way behind and planting season is basically over.

The disconnect between the fed and Japan/china banks hasn’t changed.

So where am I now?

My suspicious cynical nature suspects the large houses are trying to bait the public into buying this market. There has been a significant sell off the last few weeks, and if the public hasn’t been BTFD, and it doesn’t appear that they have this time, the large firms have been hurt. Publicly signaling that they are buying, having their PE clients buy into depressed issues (every deal I’ve seen so far is a company that has REALLY sold off, for whatever reason) smells fishy to me. This is all speculation.

I don’t think we are even “officially” in a bear market yet.

Inflation is not under control, and it doesn’t look like it will be anytime soon.

Finally, the maxim “sell in may and go away” is real.

I haven’t covered anything. I also haven’t added to anything either.

I’m expecting a dead cat bounce. Has to be strong enough to convince John Q Public they need to commit, and quickly. At the same time, need some sort of external catalyst that the future is going to be okay. I don’t know what that is. Also has to be deep enough to give the houses a chance to reposition to the downside.

The mechanical parts of the market that would facilitate a strong move, in either direction, don’t seem to be in play right now. Are the emotional ones?

Im leaning toward taking profits on my shorts, closing half my positions and moving my stops lower. I have zero confidence that this is the bottom, but more than zero (and climbing) confidence that a rally (10% say) may be in the works.

For your case, maybe dip your toes in. My gut is that this is not close to being over. But I was wrong about there being a bigger move down the last couple weeks. And the mechanics of a quick move aren’t in play right now. Baring a catalyst, I think a significant move down this month is low.

Thanks! Gibson’s is on me next time you are in Chcago.

Bullson, I know I can be a dick on here, but you defiantly understand the markets and it’s a breath of fresh air!

I totally agree with your thoughts. Any rip needs to be sold. They are still selling to retail here. We my not bottom for another 12 months…sometime in 2023

What if some hedges or even worse Oversees Banks blow up? (there is unseen risks in these markets, just look at the Yen and the Strong dollar)

QT is going to be rough. Six months from now the banks are going to be bitching and moaning

A quote from a financial newsletter that I subscribe to:

“As we’ve said many times before, unwinding high inflation is likely to be a much longer, more painful process than most people envision… The only time we’ve ever seen it was in the 1970s… and that ended with interest rates at 20%… and a deep recession…”

The investment firms passive investing methods is partly to blame. The stock market is broke.

Most products are are all duplicates of each other…except for levered and inverse funds and volatility products that you can actually use to change the delta of your portfolio very quickly.

Someone has been listening to Michael Green! @bullson 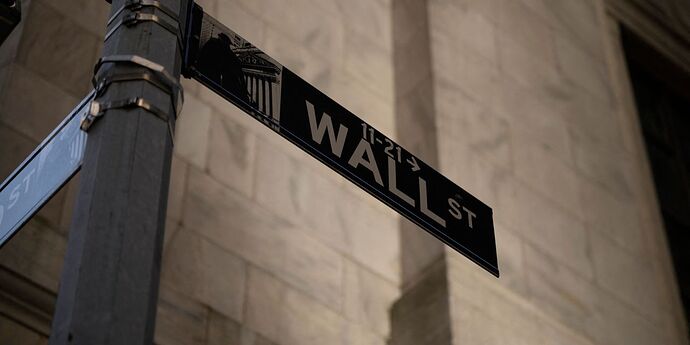 Investors haven't begun to price in recession: Here's how far the S&P 500...

The battered S&P 500 index is not pricing in a recession, according to DataTrek Research.

Damn it! I wish I would’ve taken this trade now.

I wouldve closed out the short puts and just left with long call @$40 to make money on by June 24th. 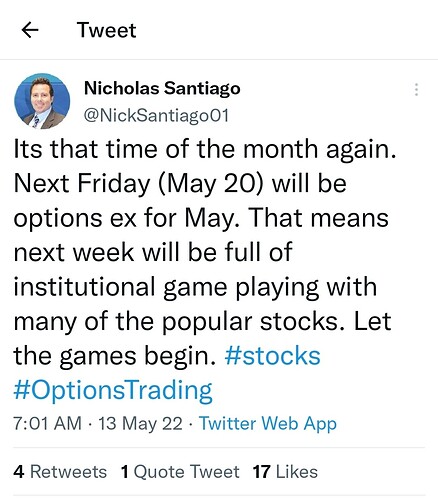 I’m taking a flyer on TWTR.

This is pure speculation. I have had some success with buyouts before. Quite common for the stock to pull back significantly at some point during the process.

Can you explain how you would manage the $50 call leg if it goes parabolic in July-August?

We know the price is 54.20, so I’m capped there unless someone else comes in and offer more, which I feel is unlikely.

The biggest risk right now is the stock going and staying below 38 in June. That’s my main concern. If I have to roll that strike I may.

The stock almost certainly won’t trade near 54.20 until the deal is close to being done. Just how these things generally work so I’m not terribly worried about going through that strike.

In this case, I don’t see Musk backing out of the deal, it’s too high profile. Much more likely he’s negotiating a better price (for him). Between the news they manufactured user data, the very real possibility the scam account percentage is wrong, the addition of very high profile investors to his deal, and the lack of other serious counteroffers, I think the odds are the price drops a bit. 50 would obviously be the tits.

If something does happen which lifts the upper bound beyond 54.20, I should be able to manage the delta through stock purchases in a pinch. Again, unlikely I believe.

Do you have any good anecdotes about having to cover in a scramble?

In this case, I don’t see Musk backing out of the deal, it’s too high profile. Much more likely he’s negotiating a better price (for him).

Lol. Scroll up near the beginning for the story about the long term capital rate cut that buried me the day before expiration, and the expiration day saving grace. On a percent of net worth basis the absolute worse and best two days ever.

Luck favors the prepared mind, but sometimes it’s better to be lucky than good

You have to stay calm and figure out a way to add or remove delta and gamma and time and keep dodging.

Dont get yourself trapped.

Fridays market threw me for a loop. It hadn’t done that on a Friday since the Ukraine invasion. I had a plan in case it did that, I just wasnt expecting it.